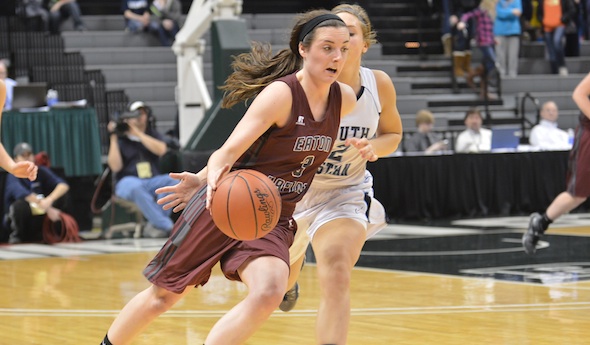 EAST LANSING - Dittmer was the difference.

Grand Rapids South Christian came into Saturday's MHSAA Class B championship game ranked No. 1 and with a 26-game winning streak. But the Sailors had never faced an inside force like 6-foot-1 senior post player Allie Dittmer of Eaton Rapids.

"We tried our best to stop her," said South Christian coach Jim De Bruyn, "but she was just a horse in there."

Dittmer dominated the interior, scoring 26 points on 9 of 15 shooting and grabbing 13 rebounds to lead unheralded Eaton Rapids to its first-ever MHSAA girls basketball title in a convincing 51-38 upset of South Christian in Saturday's finale at the Breslin Center.

The Greyhounds (23-5) came into the MHSAA tournament as an honorable mention in the final Associated Press regular-season poll, but relied on five senior starters to knock off No. 6 Ypsilanti Arbor Prep in the Quarterfinals, No. 8 Flint Powers in Friday's Semifinal and then top-ranked South Christian in Saturday's Final.

"I told the girls before the game that we don't need to be perfect, we just need to be us," said 15th-year Eaton Rapids coach Willis Whitmyer. "I'm not the smartest guy here, but I'm smart enough to know when I have a good inside player. Everyone on this team has heard it 1,000 times from me: 'Get the ball inside to Allie.'"

Dittmer, who will play next year at Hillsdale College, scored two points in the first quarter as both teams struggled out of the gate. The quarter ended in a 7-7 tie.

But Dittmer came alive with nine points in the second quarter as the Greyhounds inched ahead to a 19-16 halftime lead, and it appeared that the second half would be a down-to-the-wire fight. 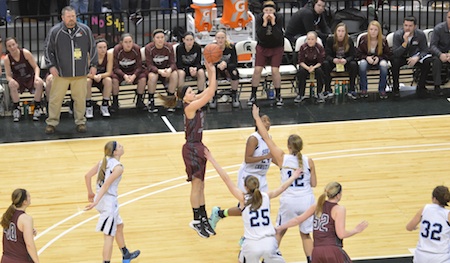 However, buoyed by a raucous, maroon-clad crowd chanting "We are, E.R.!," Eaton Rapids used its zone defense to stymie the Sailors' comeback attempt.

While the defense was doing its part, Dittmer got back to work on the block, scoring five points in the third quarter and then tallying 10 in the fourth (despite picking up her fourth foul with 4:35 remaining and having to sit for stretches) as the Greyhounds pulled away.

"I’ve got to give credit to my teammates; they worked it around and made it easy on me," said Dittmer, who garnered honorable mention status on the Associated Press Class B all-state team announced this week. "This win means so much to all of us.”

As Dittmer began to demand more and more attention from the Sailors, it began to open up shooting opportunities and driving lanes for the Eaton Rapids guards.

The Greyhounds were 18 of 26 from the free-throw line, compared to just 3 of 6 for South Christian. Senior guard Kathryn Mills was the only other Eaton Rapids player in double figures scoring with 11 points, including a game-clinching 3-pointer right in front of her school's delirious student section with 1:35 remaining that gave the Greyhounds an insurmountable 48-37 lead.

"It was about time, was the way I looked at it," said Mills, one of those five senior starters. "I had a rough start, but that's the way a lot of our games went this year. We got more open looks at the end because the other team is focused on stopping Allie."

South Christian 5-11 senior Renee Broekhuizen, who battled Dittmer inside all night, was the lone Sailors player in double figures, with 13 points. Broekhuizen buried back-to-back 3-pointers to pull her team to within 37-33 with 5:15 remaining in the game, but the Sailors were outscored 14-5 the rest of the way.

Dittmer scored four points during the final run, and senior guard Meghan Dassance scored five of her six during that stretch.

"She's a great player, and she has a strong body," Broekhuizen said of Dittmer. "We never gave up, we were relentless and we refused to lose. But it just wasn't our night."

South Christian (26-1) lost for the first time since last year's Semifinals at the Breslin. It was the Sailors' third appearance in a girls basketball title game, as they won the 1988 Class B championship and finished as the 1980 Class C runners-up.

"It's not what we planned on, but here we are," said De Bruyn, who has won 441 games in 25 years as South Christian's coach. "We struggled against their zone and couldn't seem to get many good, open shots."

But Whitmyer felt another force during Saturday's game, especially in the second half, which he felt made a big difference in turning things in his team's favor.

"I thought our fans were unbelievable," said Whitmyer, whose team won all eight of its tournament games by at least 10 points. "I looked out there, and I thought we owned the Breslin. Our support system throughout the school and the community was really something else, and that makes this even more special."

HIGHLIGHTS: (1) Allie Dittmer led all scorers with 26 points and all rebounders with 13. Here she scores on a putback just before halftime to give Eaton Rapids a 19-16 lead. (2) Renee Broekhuizen led South Christian in scoring with 13. Here's a 3-pointer she hit early in the game.