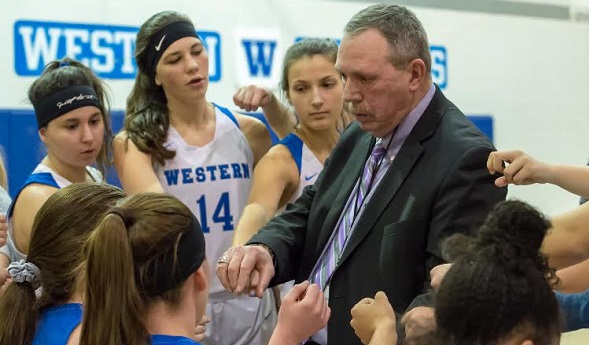 WALLED LAKE – The past two holiday seasons, there has been more trash-talking than usual among Steve Emert and his family.

Two years ago, Emert was offered and accepted the girls basketball head coaching job at Walled Lake Western. But there was one intriguing family twist to that decision.

For that reason, cue the trash talking around the thanksgiving and Christmas dinner tables, although it was obviously good-natured.

“Just a little trash talking back and forth,” Emert said with a laugh. “The trash talking takes place more with my sons. But that’s OK. It’s all in jest and fun.”

Truth be told, if it wasn’t for Olivia, Steve wouldn’t be coaching at Western – where as of Jan. 16, he had amassed a 31-2 record over the last 1½ seasons.

Now a senior at Central, Olivia wasn’t shy about lending her opinion when Steve told her he had been approached about the job at rival Western.

“I sat down with her and told her I had been approached to coach another team,” Steve Emert recalls. “But if you said, ‘Grandpa, I want you at my games,’ then I’m going to be at your games. I’m not going to coach. She said, ‘Grandpa, go do what your passion is. Go coach.’ So that’s what I did.”

As a result, Emert, his family and the entire Walled Lake community got to celebrate a significant milestone Dec. 20.

“It’s a big accomplishment,” Emert said. “It’s nice to have, but as I tell a lot of people, it just means I’m getting old and I’ve been around a long time. But I’m proud of it and I’m proud of the fact I’ve had the opportunity to work with so many good student-athletes and parents.”

He started his coaching career in the Walled Lake school district in 1979, with the highlight of his time on the bench coming in 1995 when he helped lead Walled Lake Central to the Class A championship game. Central was defeated by Flint Northern, 59-40.

A few years later, Emert gave up coaching to take on an administration role in the Walled Lake district, which prohibited administrators from being coaches. He did, however, serve as coach of the Oakland Community College women’s team from 1999-2001.

>Emert retired as an administrator in 2009, but got back into coaching less than three years later when he was offered and accepted the varsity girls basketball coaching job at Oxford. 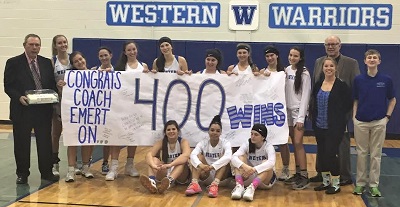 “When I retired, basically my wife said, ‘You’ve got to get out of the house. You’re driving me crazy,’” Emert said.

Emert quickly turned around the Oxford program, leading the Wildcats to an Oakland Activities Association White title in 2014-15 before resigning the following season after five years on the job.

The big motivation leaving Oxford was spending more time watching Olivia, who at the time was a part-time starter for Central.

Now a senior for the Vikings, Olivia gave her grandfather her blessing to take over at the rival school, and Western has become one of the top teams in the Detroit area with a 9-0 record. Western went 22-2 last season.

Rachiele, who was a member of the varsity team before Emert arrived, said the difference in philosophy has been like night and day since he took over.

“Our two coaches were old-fashioned, pull-it-back out, and they were perfectly fine winning a game 24-23,” Rachiele said. “Although we were winning games, I don’t feel any girls on the team were enjoying it. It was an adjustment at first (to become fast-paced), but I think all of us knew that is what was best for us as a team and we adapted to it pretty quickly.”

There will be plenty more time for trash-talk between the Emerts, since Central and Western still have to play twice during the regular season in Lakes Valley Conference play and have drawn each other in the first round of District play March 4.

But no matter what happens, the community is certainly happy that Emert is continuing to add to his coaching legacy in Walled Lake – and on the state’s landscape as well.

“He is such a humble guy, and he really doesn’t want to own up to all the accomplishments he has,” Rachiele said. “We know now what an impact he’s had on high school basketball.”