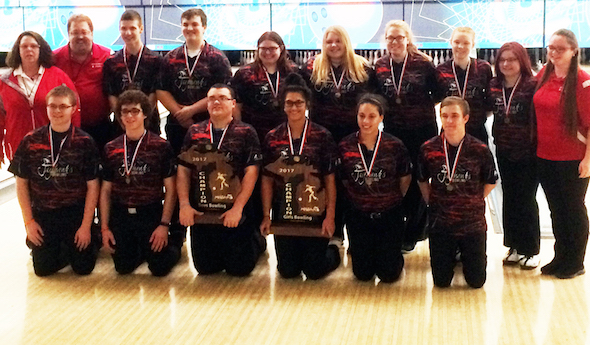 By Dick Hoekstra
Special for Second Half

LANSING – One was for the first time and the other for a sixth.

“We got a couple breaks where they didn’t in the Baker games,” said Vandercook Lake girls bowling coach Todd Reichard, whose team pulled ahead by 69 pins with 177-159 and 188-137 Baker game wins. “Then we just stayed steady with them. We tried to fill frames. It was two good teams. We just got lucky in the Bakers.”

Senior captain Ariel Robinson rolled a 211 and sophomore Mackenzie Johnson a 202 in the Final for the Jayhawks, who were seeded No. 1 after qualifying and defeated No. 8 Dryden and then No. 5 Rogers City 1239-1166 to reach the championship match.

“These young ladies just refuse to lose,” Reichard said. “I lost four seniors last year. I knew I had a lot of work with a new group this year. This is number six for me, and I tried to do it with depth, because I didn’t have a superstar. Mackenzie (sophomore and individual Regional champion Mackenzie Johnson) might be my best bowler, but everybody chipped in today. I’m still amazed how we got here.”

St. Louis emerged as the No. 2 seed after morning qualifying before defeating No. 7 seed Traverse City Christian and then No. 3 seed Schoolcraft.

The Sharks actually edged Vandercook Lake 871-868 in pins over the Peterson games as senior Emily Thelen threw a 231.

“We just had a lot of bad breaks with some nasty splits in the Baker games, and that’s what came back and got us,” St. Louis girls bowling coach Brittney Mizer said. “The girls didn’t bowl bad. They should be super proud of how they did. I know I am.”

The No. 2-seeded Sandusky boys after morning qualifying were trying to become the first repeat champion in Division 4, and seemed poised after edging No. 3 seed St. Charles 1356-1343 in a Semifinal that was a rematch of last year’s championship match.

“We bowled really well in the St. Charles match, and it felt like a state final,” Sandusky boys bowling coach Del Shea said. “It was pretty exciting. I’ve been coaching 12 years, and I don’t remember anybody defending. That’s what we were trying to do. We almost got there.”

The Redskins fired a 254 to Vandercook Lake’s 192 in the first Baker game, but the Jayhawks answered with a 290 to Sandusky’s 160 in the second Baker game to take a 68-pin lead.

“We came back, and we were only 20 pins down in the middle of that (Peterson) game,” Shea said. “We almost got it back, but we ran out of steam. Everybody bowled really well, especially our seniors Brandon Hughes, Jared Jagotka, Cody Johnston.”

Vandercook Lake boys bowling coach Libie Ambs said the Jayhawks also had to come from behind in their Semifinal with Rogers City.

“But the match with Sandusky was the toughest,” she said. “Korey Reichard bowled well all day. He shot 257 the last game. All of them bowled well. Everybody at least had one game over deuce (200).”

Ambs’ first year coaching the Jayhawks boys was 2009, when they finished as runners-up in Division 3.

“Last year, we got knocked out in the Semifinals,” she said. “This year they kind of had a mission. Korey kept them pumped after every shot, and kept them going.”

PHOTO: The Vandercook Lake girls and boys teams stand together after sweeping the Division 4 championships at Lansing’s Royal Scot. 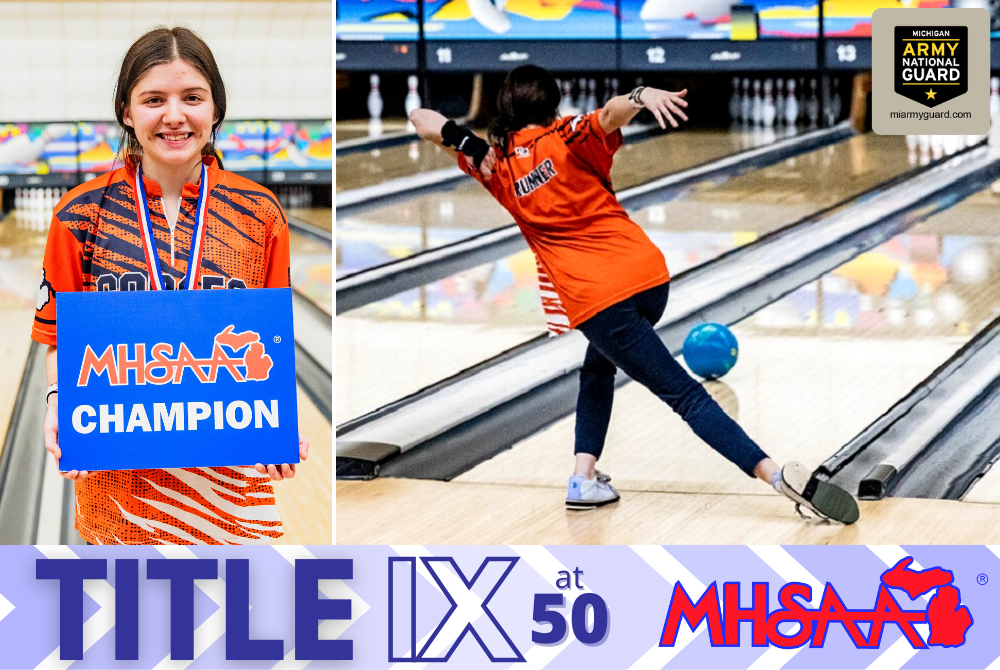