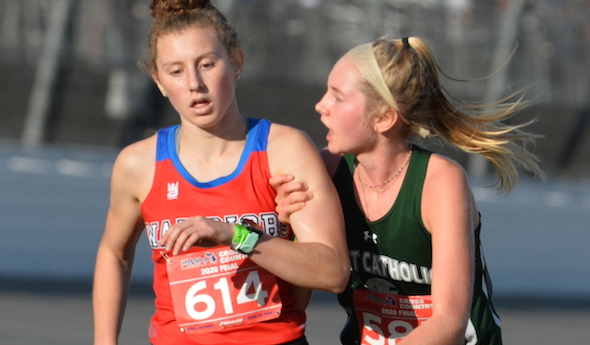 Duba, a Grand Rapids West Catholic junior, sacrificed her time and position in the eventual race standings to help a fallen fellow competitor make it to the finish line.

It was an uplifting moment during an unprecedented year due to the COVID-19 pandemic.

“I’m really surprised at the attention it has received, and I wasn’t thinking at all like the news is going to see this, but I’m glad it did and everyone has said how it was needed in 2020,” Duba said. “It shows the good that can come out of sports, and it’s just another reason for me to be thankful that I was able to run this season.”

Duba was heading down the final stretch of her race Nov. 6 at Michigan International Speedway when she saw Remus Chippewa Hills junior Sarah Storey in anguish.

Storey had fallen to her knees, struggling mightily to rise back up and continue.

“I remember coming around the curve, and I was on the straightaway when my legs started to give out a little bit,” Storey said. “I was determined to try and make it to the end as best I could, but I really couldn't move my legs anymore and then I finally went down.

“After that it was a struggle to get back up, and I was thinking maybe I could crawl or something. I was stuck until Maggie came along.”

After a rough start to the race, Duba had found her form in the second mile and headed into the stadium looking to make a strong closing push.

That’s when she noticed Storey. The pair were about 15-20 yards from the finish.

“I was trying to pass as many people and still get a good time,” Duba said. “I saw her down, and it was just kind of instinct to go right up to her and pick her up. I’ve seen it before in the Olympics, and I guess seeing that made me think that I needed to do that, too. I threw my goal of having my best race out the window because helping her was more important.”

Duba didn’t hesitate, and aided Storey by helping her up and offering encouraging words.

“She did not want to get up so I had to talk to her a little bit and slowly pulled her up and helped her,” Duba said. “The time is still ticking, and the girls I had worked hard on passing were passing me. I did notice that, but I didn't stop helping her.

Duba was determined to make sure Storey also completed the race.

“I told her that you can’t not finish right now,” Duba said. “She had pushed so hard like everyone there racing, and anyone who has had that great of a finish deserves to finish that race, especially when she was so close to finishing. I was glad that I was able to help her because if she wasn’t able to finish then that would've been really sad, especially this year.”

Although disorientated at the time, Storey vaguely remembered what Duba told her.

“From what I remember, she kind of said, ‘Come on, you can do this, you didn’t come this far not to finish.’ She just really tried to encourage me and convince me to get up and everything,” Storey said. “For me it was a big reminder of how sports are a lot bigger than just how fast you can run or how well you can do. It’s the people that make the sport, and I think what Maggie did showed a lot of people that, including myself.

“I think sometimes, especially at the state finals, you are concerned about your place or your time, but sometimes it’s not about that. It’s about the people you can help instead of just your finish.

Storey collapsed after crossing the finish line, and was taken to an ambulance. She was treated for about 20 minutes and then released.

“It was actually kind of weird because nothing like that had ever happened to me before,” Storey said. “They checked my vitals and everything and they thought about giving me an IV because they thought I might be dehydrated. They didn’t give me anything, and I went home that night and laid low and recovered the next couple days. I was pretty tired.”

“They said it was a fluke thing,” she said. “It might’ve been a combination of a couple things that weren't quite right and they all came together on the same day. It might've been the heat because it was a little warmer than normal for November that day. It really was the perfect storm.”

At the time, she was unsure if it was her daughter who had helped the fallen runner.

“I could see that someone had fallen, and she had helped them up. I got a little panicky at that point,” Noreen Duba said. “I saw her help her up, but I was running along behind the cement walls to get there and I didn’t see the complete finish. I didn’t see Maggie let her go and let Sarah finish on her own. Then we lost track of Sarah.”

The Dubas left the race not knowing the name of the girl, which school she attended or her condition.

“I didn’t know what happened to her, and I was going to go home and look at the results and try to find someone from a school that had a red uniform to see who this girl was and what happened,” Noreen Duba said.

A mutual friend from a cross country camp who was at the meet had seen the finish and recognized Maggie Duba.

Ironically, he went to Remus Chippewa Hills, and the coach called later that night to give an update. Noreen Duba and Storey’s mother, Beth, talked the next day.

Noreen Duba, who became emotional after the race, wondered what she would’ve done with a similar circumstance.

“I’m glad that Maggie did that, and I said to my assistant coach, ‘In that oxygen-deprived state, running hard toward the finish, focusing on that finish, would I have done the right thing?’” she said. “I was very proud and impressed by Maggie because that was her instinct. There wasn’t a thought process.

“Maggie stopped and helped her ,and I think I would’ve done that because that’s the way I’ve raised my kids and how I coach my team. You would do the right thing. Nothing is as important as helping somebody in need. I was really glad and relieved that she did that because you hate to see that happen.”

After Maggie Duba’s show of sportsmanship, she displayed a unique move upon crossing the finish line: She did a cartwheel … sort of. 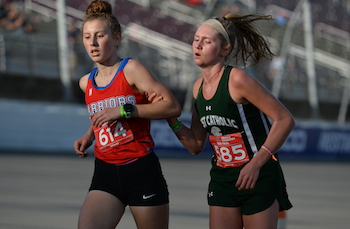 “It wasn’t as great as I thought it was going to be because I was so tired,” Maggie Duba said. “I did that, and it was awful and embarrassing and I looked really dumb, but I did it for my teammates who came to support me.”

Maggie Duba was alone at the meet after West Catholic missed out on qualifying as a team. However, her teammates made the long trip to watch her run and challenged her to do something different at the end.

“They dared me to do that because my friend and I had been working on our handstands all season and she wanted me to walk on my hands across,” Duba said. “There was no way I was doing that, but I did the cartwheel and they thought it was hilarious and they were so glad I did it. They were waiting all race for me to do that so I’m glad I did it for them because they were really happy.”

Duba and Storey hope to return to the Finals next year as seniors. Storey said she learned valuable lessons from her experience.

“I have a little more perspective about how deep the sport can really go and how many people it can reach,” she said. “It just makes me excited to finish out my senior year of cross country and see how I can impact other people by what I’ve learned through this experience.”

PHOTOS: (Top) Grand Rapids West Catholic’s Maggie Duba, right, encourages Remus Chippewa Hills’ Sarah Storey while helping Storey complete their Division 2 Final on Nov. 6 at Michigan International Speedway. (Middle) Duba, upon finding Storey on the ground about 15-20 yards from the finish line, assists her to her feet and guides her the rest of the race. (Below) Storey, left, and Duba approach the finish. (Click for more from RunMichigan.com.)