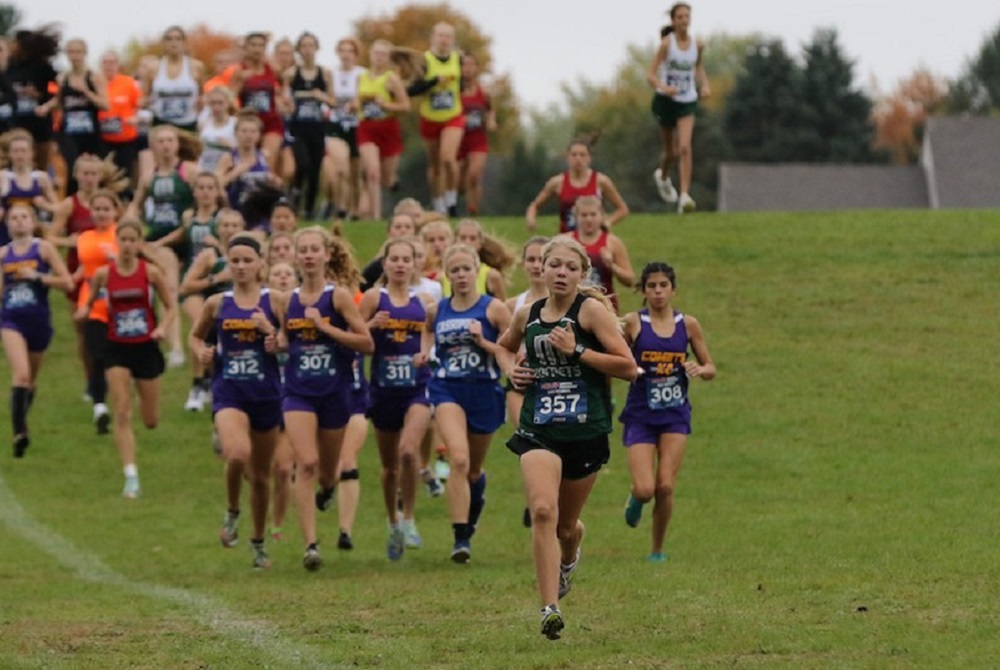 Art Stephenson’s family knows not to make any big plans in early November.

Each season of his 18-year tenure has ended the same way, with the Mendon cross country coach roaming Michigan International Speedway and motivating his runners in green.

The Mendon girls team’s appearance this weekend at the MHSAA Lower Peninsula Division 4 Finals in Brooklyn marks the seventh since Stephenson took over. Previously, the boys team made 17 consecutive trips to the championship race.

Even with fourth-seeded freshman Presley Allen leading the way in an unbelievable debut season, the Hornets were on the verge of seeing that team-qualifying streak snapped. For most of the year, Stephenson’s squad didn’t have enough runners to register team points. In fact, it took until Oct. 16 at the Sturgis Kiwanis Invitational for Mendon to put together five times for a team score.

Like most small schools, Mendon struggles yearly to fill out its athletic rosters. And considering the storied histories of the Hornets’ volleyball and football programs, getting kids to choose cross country — despite its own record of consistent success — isn’t always easy. So, numbers were low this year, and with Allen missing four of the first six meets due to COVID, a team trip to MIS didn’t appear to be in the cards.

But Allen, who had nine individual victories and a school-record time of 18:37 in a runner-up performance against top-ranked Abby VanderKooi (of Muskegon Western Michigan Christian) at the Portage Invite this fall, eventually returned to full strength. And she and teammates Amber Hostetler (senior), Lauren Schabes (junior) and Chloe Behrends (senior) spent their free time recruiting anyone who would listen. 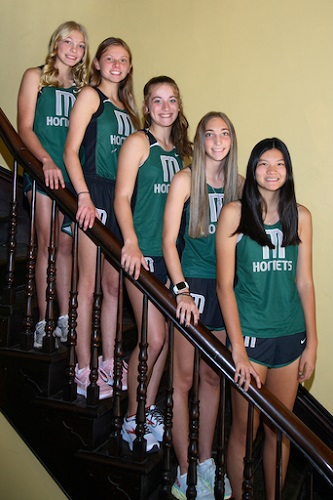 “We didn’t have enough to score as a team for either boys or girls for most of the year,” Stephenson said. “We were wondering if we were ever going to with this girls team, to be honest with you. We had Alivia, who ran her heart out last Saturday (at Regionals), she came out, and so did Gracey Loker — they both came out and they have obviously been great additions to the team. They allowed us to get to this point where we’re going to the state meet.

“It is a hard thing to do and a hard thing to convince a kid to do. The least amount you’re going to do on any given day of practice is four miles. It’s a hard sell. But we do a lot of things outside of practice. We used to do more before the pandemic. We do team dinners, which is always a fun thing to do. With the smaller teams, we still have just as much fun. It’s a good thing.”

Mendon finished fourth at the Division 4 Regional at Portage Central with 92 points, trailing Kalamazoo Christian (26) and Battle Creek St. Philip (72). Allen was medalist by over a minute with a time of 19:02.09. But a 13th-place finish by Hostetler, a 23rd-place effort by Schabes, Stuart’s 34th-place run and Behrends’ 45th-place finish helped secure the Finals berth.

Allen’s rise to the top of the program’s record list required besting her cousin Kasey Culp’s time of 18:43 from 1997.

“She was cheering me on the whole time,” Allen said of Culp. “She lives in Kentucky and she was texting me and asking me … she was almost as nervous as I was.”

Having competed against most of the top-seeded runners in D4 already this season, Allen is excited to be a part of a lead pack Saturday in Brooklyn that includes VanderKooi, Buckley sophomore Aiden Harrand, Maple City Glen Lake senior Makenna Scott and Western Michigan Christian freshman Grace VanderKooi.

“It really makes me think about how they were running in each meet and what they do,” Allen said. “It has helped me know what to do when I go to state.”

“She has had a lot of success this year,” Stephenson said of Allen. “She had COVID early on in the year and we’re lucky it was early on in the year. It took her a while to get back. I think she’s back to form now and doing well. She is definitely there in that top five (at state). She is probably the most driven runner I’ve ever had. She’s amazing, and she loves to do what she’s doing — and it shows. She has a workout regimen that I defy any high schooler to do.

“Getting out clean isn’t a worry because she gets out fast. That’s always been her thing. She has only been behind a couple times this season. She’ll keep chasing if that happens. This week is going to be an awesome race because of who you have there. That’s quite a top five for a D4 Final. It is going to be a fun race to experience.”

Stephenson and Allen both agreed it will be a whole lot more fun having that experience as a team, made a whole lot sweeter after the adversity they faced in 2021.

“It doesn’t matter when we get them, as long as we get them,” Stephenson said. “Everyone is out here doing the same thing for the same cause.”

PHOTOS (Top) Mendon’s Presley Allen leads the pack during her team’s Division 4 Regional at Portage Central. (Middle) The Hornets advanced to the Finals as a team with a third-place Regional finish. (Photos by Nicci Plummer/JoeInsider.com.)