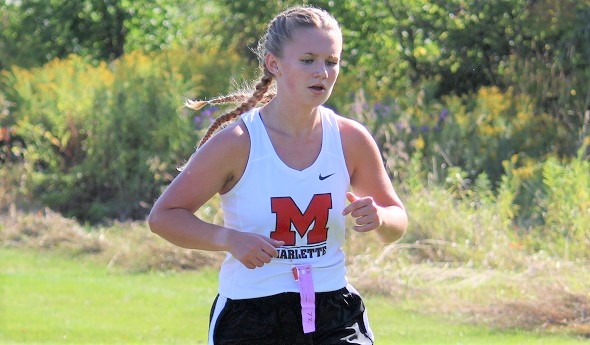 Riley Ford wouldn’t have it any other way.

“I’m more of a summer person, but in regard to running, I like the cooler weather,” the Marlette senior said. “I perform a lot better in the cold. I don’t get as overheated. I love the cold – when your legs are almost numb because it’s so cold – I love that feeling.”

Ford will compete for a second straight Regional championship, the next step toward what could be a third straight all-state honor. More importantly, however, she wants to get back down to the times she was running a year ago, and the cold weather could play a major role in that. Not just because of her preference, but because of her health.

During the 2019 track season, Ford was diagnosed with asthma, which was brought on by a tree pollen allergy – something that flares up during the warmer months. While she’s dealt with it admirably, setting school records in the 800, 1,600 and 3,200 meters in track, and winning five of her 10 cross country races this season, she knows she hasn’t been at her best.

“I’ve tried to stay positive,” Ford said. “I went on a college visit and was talking to one of the girls who also had asthma, and she said, ‘It’s OK. Sometimes you’re not going to be able to finish every workout.’ I’ve been realizing that some of it is beyond my control. It’s been very frustrating. Super, super frustrating. But I keep going back every Monday after a race and trying to get better.”

Initially, Ford thought she was dealing with a cold, but it wouldn’t go away. She began audibly wheezing during races, something Marlette coach Chris Titus – who is also Ford’s uncle – noticed as strange, as his star runner was known for her incredible endurance.

“She had set the school record in the mile, two mile and half mile, and everything was going really good,” Titus said. “We got to late May, and we started to notice this wheezing problem. By the time we got to June, she was in trouble.”

Ford also was very aware that something was off.

“I kind of noticed that my lungs were starting to feel heavy,” she said. “I knew I was in good shape in the track season, because it was the first year I had upped my training. I knew it was something else. It was not really an out-of-shape feeling.”

She cut back some of her training during the summer as she dealt with her new condition, and now runs with an inhaler.

Despite all of that, her season-best time of 19:03.3 ranks fourth in Division 4. She finished fifth in the division a year ago at the MHSAA Finals, and was 22nd in Division 3 as a sophomore.

Ford, who has a personal best of 18:49 and broke the 19-minute mark three times as a junior, knows there are better times ahead of her, and she’s hoping to start posting them Saturday.

“I’m not really just looking to win,” she said. “I’m hoping to run under 19 – I did it last year. Not only do I want to win it and get points for my team, but I want to drop my time to go into states with some momentum.”

Her season goal is very much the same, as she said she hopes to finish strong and giver herself some confidence and momentum heading into the preparation for her senior track season and beyond. Ford plans to run collegiately and has narrowed her choices to two schools: Huntington University in Indiana and Dalton State College in Georgia.

No matter how things finish, Ford already has taken her place as the top female distance runner in Marlette history, as not only does she hold the three track records, but also has the school’s best cross country time.

“She’s had a great career,” Titus said. “Every single year, she has excelled and improved. I’ve had some very good girls runners, and she’s darn close to a minute faster than anybody I’ve ever had. A lot of those (records) are going to be there for a while. She’s drove them down to the point that she’s likely going to keep those for a while.”

That praise isn’t lost on Ford.

“It makes me feel really good knowing how much time, effort, blood, sweat and tears I put into this,” she said. “It means a lot to me. There are tons of runners that he’s coached. To stack up with (the best) is just insane.”

PHOTO: Marlette’s Riley Ford charges ahead during a race this fall. (Photo courtesy of the Marlette girls cross country program.) 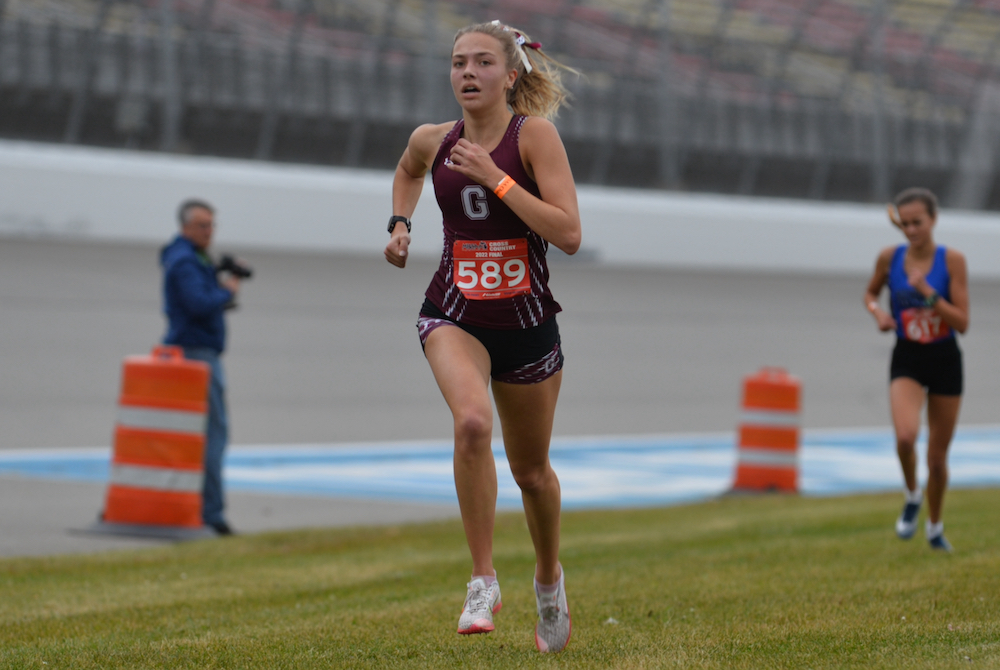 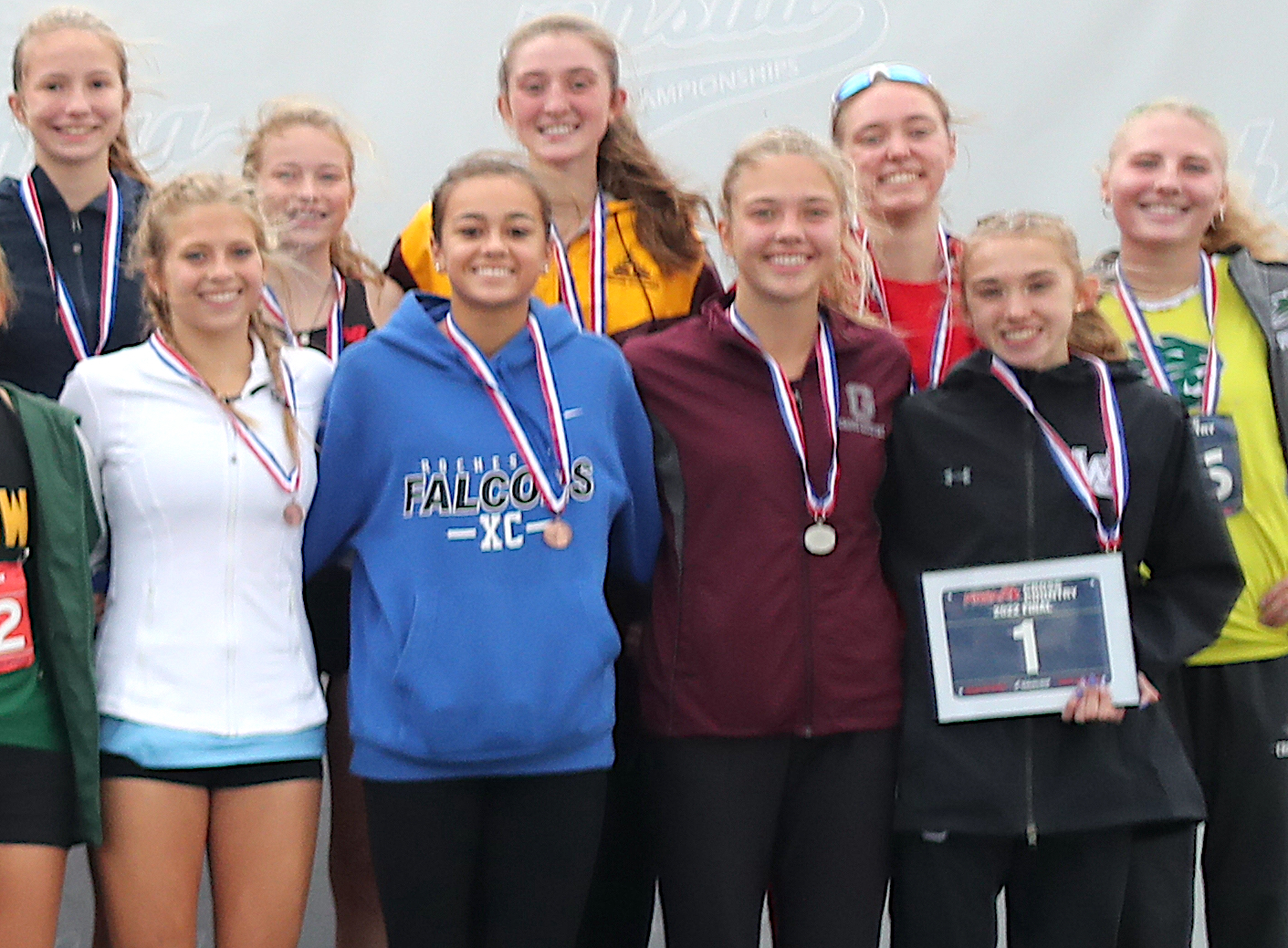