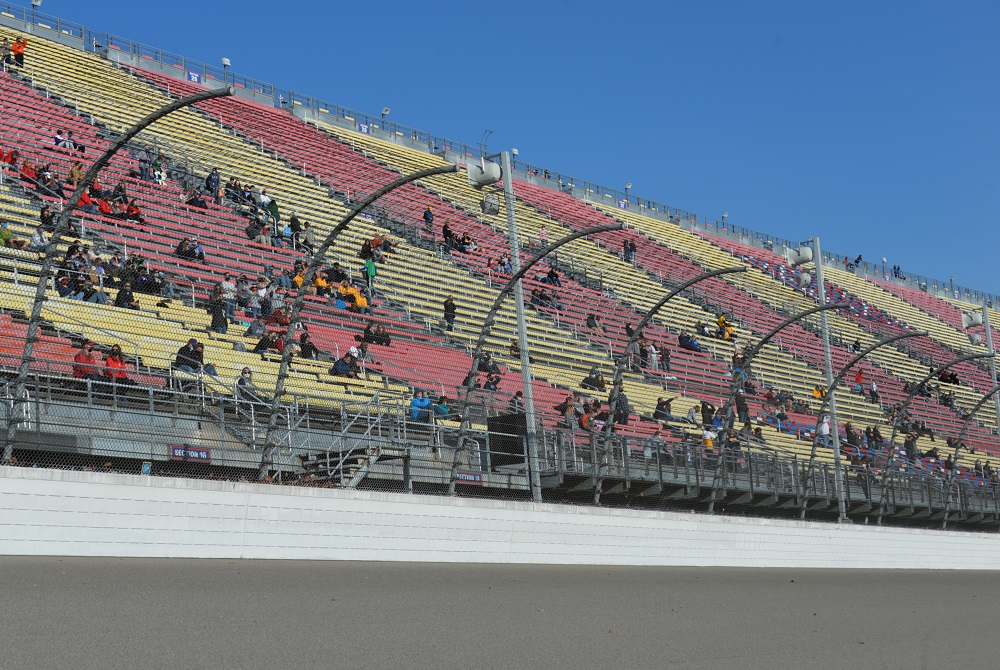 The “MHSAA Vault” features stories from past publications and other documents in the MHSAA Library. This issue takes a look at the MHSAA Cross Country Finals at Michigan International Speedway, which celebrated 25 years in 2020 – although it was an event that nearly didn’t happen last fall …

In 1996, the MHSAA and Michigan International Speedway began a partnership the changed the course of the Lower Peninsula Cross Country Finals – quite literally.

The land in and around the track at Brooklyn would host the Finals for all classes of runners in one place on one day, an annual festival of nearly 2,000 runners competing for the MHSAA’s top honors.

Even skeptics – and there were several among running purists who thought the course was too flat, for example – can’t deny the results.

Finals attendance nearly doubled in that first year, and crowds in excess of 10,000 have enjoyed a day of racing several times, including a record 12,153 in 2011.

In fact, attendance failed to reach at least 8,000 only twice since the move to MIS.

Of course, last year was an exception, when attendance was limited to 1,000 spectators per session due to the COVID-19 Pandemic. Fans also were restricted to the grandstands rather than following the action throughout locations on the course.

To reduce the number of runners in each race, the event was spread over two days, with each Division being run in two separate “sections” with times then combined at the end to determine team and individual champions.

While not ideal, the end result was another year of fantastic efforts at MIS – both from student-athletes and those behind the scenes.

“Even at the last hour, less than a week ahead of the Finals, we were closer to not having the Finals than we were to having them,” said MHSAA Assistant Director Cody Inglis, who coordinates the cross country postseason. “Rumors and challenges of mandated shutdowns, testing and other requirements were being discussed and caused a lot of unknowns. Even at the Regional level, we had schools, Regional courses and hosts shutting down their facilities; we had to relocate four Regionals 48 hours prior to race times. That scenario just could not happen at the Finals level where far more runners and much more travel would be involved.”

Among the many last-minute hurdles was the edict from NASCAR – which owns MIS – that all persons on site be temperature checked upon entry. That meant securing thermometers that were easy to operate in short order, along with personnel necessary to conduct the readings.

The attendance limitations certainly helped to implement the temperature screening, but brought their own issues.

“Limiting spectators was not a popular decision, but it really was the only way to have a race,” Inglis said. “We were taking direction and working with policies and protocols from the MDHHS, the Governor’s office, Lenawee County Health Department, MIS and NASCAR.”

Part of the solution was to utilize the grandstands as a “barrier” between participants and spectators. The reduced number of fans were dispersed over thousands of seats while still allowing them the chance to watch their student-athletes compete.

“It wasn’t the same, it wasn’t easy or perfect, but it was what we had to do to have a race,” Inglis said. “Separating the Finals into two days and different sections also allowed us to spread out the event and limit the number of people on site at any one time. This was a key part of the plan and worked well even though it separated races within a Division.”

The MHSAA, MIS and the cross country community never lost focus of the main goal: a culmination of the season for the student-athletes, who deserved something last year more than ever. And, more than ever, MIS once again displayed its advantage as a venue that could adapt to the fluid nature of the times to pull off the event.

“There were some thoughts of using four different sites, but as we learned during the Regionals, the climate of things was so tenuous from one area of the state to another that we couldn’t be 100-percent certain that there wouldn’t again be last-minute cancelations,” Inglis said. “MIS was wonderful to work and collaborate with, and was the best option to get it done. It was never mentioned once publicly about the possibility of not having the Finals – only how we could best do it under uncharted conditions.”

The moving parts and ever-changing scenarios created more complexity than ever in finalizing a season, but every decision was made with the complete desire to conduct the Finals as close to normal as possible.

“I firmly believe that a finish to the season, no matter the differences in race formatting and fan experience, was something everyone would have taken when the season began in August,” Inglis said.

Indeed, the finish line in Year 25 at MIS might have been the most gratifying of them all.