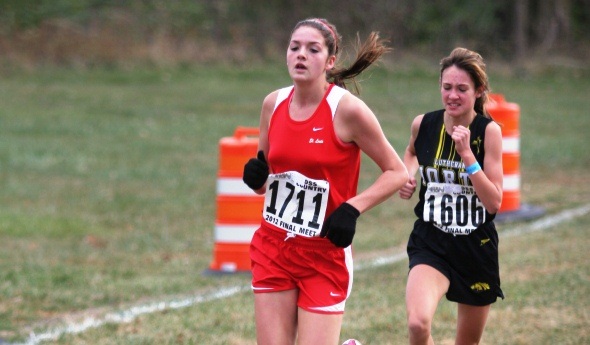 BROOKLYN — Gina Patterson of Macomb Lutheran North was one of the favorites to win the MHSAA Lower Peninsula Division 3 cross country championship, based on her performance last season.

She may have been the only person who didn’t view herself as one of the runners to beat.

Perhaps it was the power of tempered expectations that relieved her of any pressure. Whatever it was, Patterson dominated a field that featured some of last year’s top finishers to win going away with a time of 17:43.4 Saturday at Michigan International Speedway.

Patterson was sixth at the MHSAA Final last season, finishing behind three runners who were in Saturday’s race.

“I just came out here and looked forward to having a good experience,” Patterson said. “It was a great surprise.”

In shattering her personal best, Patterson reached the mile in just under 5:30. She took the lead for good after the two-mile mark.

“It felt great,” she said. “I didn’t know how fast we were going. When we crossed the line, I wasn’t expecting it to be that quick of a first mile. I just pushed it to finish it and seal it.”

As the race unfolded, she wasn’t sure if the fast early pace would catch up with her.

“I kept looking back and thinking if I was going too fast and what was going to happen,” said Patterson, who was relieved to see the gap between her and Serna growing as she entered the stadium for the final half mile.

The team race was considerably closer, with Jackson Lumen Christi edging Grandville Calvin Christian by a 167-171 margin. Caro was third with 201 points.

It was the Titans’ ninth MHSAA team championship and first since 2007.

PHOTO: St. Louis' Raquel Serna (1711) and Macomb Lutheran North's Gina Patterson keep pace at the front of the Division 3 Final. Patterson broke away for the win. (Click to see more from RunMichigan.com.)