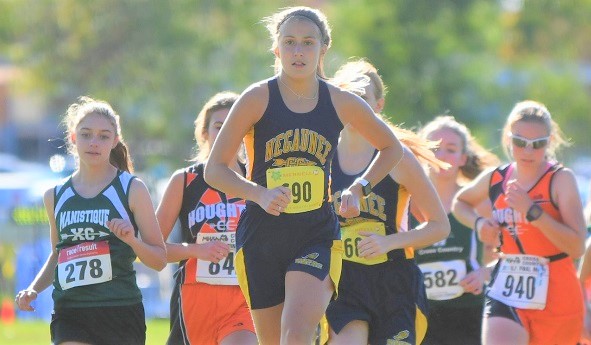 After an illness forced Paupore to miss a week of school and training – and threatened the rest of her season – the two-time reigning Upper Peninsula Division 1 champion returned to competition and set a Tracy Strom Invitational record of 19:29.2 at Al Quaal Recreation Area, earning the MHSAA “Performance of the Week.”

Paupore cleared the field by 2:04 and cut seven seconds off her winning time from 2018 at the hilly Ishpeming-area course. She has won all but two races over the last two seasons – her only non-victories were in the “Elite” race at the Spartan Invitational at Michigan State University, where she finished 23rd this fall and 30th a year ago running against many of the Lower Peninsula’s best. Paupore will test herself against downstate competition again this weekend at the prestigious Portage Invitational as she seeks to push toward a personal record in the mid-18s. She has dropped her PR nearly nine seconds already this season, to an 18:48.8 she ran at the Marquette County Meet on Sept. 5. Paupore also dominates on the track – she’s won the 800, 1,600 and 3,200 meters at the Upper Peninsula Division 1 Finals the last two seasons after finishing second in all three races as a freshman, with her 3,200 time in 2018 (11:25.52) the meet record.

Running certainly runs in her family. Paupore’s mother Vickie (Leathers) Paupore ran collegiately at Lawrence University in Wisconsin and is Negaunee’s girls track & field coach, and Emily’s father Mark Paupore has run half and full marathons. Emily Paupore also played basketball her first three years of high school but instead will run indoor track this winter. She’s unsure where she’ll continue after graduation in the spring – but she’ll have options. Paupore also carries a 4.222 grade-point average and is interested in studying elementary education or pediatrics.

Coach Lisa Bigalk said: “She's one in a million, one in a career. I’m very honored to be her coach. She is very dedicated, very enthusiastic and positive, and I think she really loves running and wants to become the best runner she can be. At times, it's pretty amazing, I've had to hold her back. That doesn't happen real often with high school athletics. ... Besides being a great role model and leader for our team, she's really looked up to by other high school and middle school runners in the whole U.P. I’ve heard coaches, parents other athletes say she’s very respected and is a great role model.”

Performance Point: “I was really sick, so I really wasn't sure what was going to happen that day. And it's a really challenging course, so I knew it was going to be a hard day for me,” Paupore said. “So I just went out and did what I could. … We weren't sure what sickness I had. We kinda thought I had mono(nucleosis) for a while, so they didn't want me running on it. It was a challenge, and just having that thought go through my mind that I wasn't going to be able to run the rest of the season and I wasn't going to be able to finish my senior year – I guess I take it for granted sometimes. But it made me realize how lucky I am to be able to run and use my gifts.”

It’s been a great high school run: “I just think every year, (I’ve been) trying to get better and faster, just to improve. And on improving myself instead of focusing on who I'm racing against, my competition – I think every year I've gotten better at that. And I'm a more confident runner, so I think I'm proud of that. … I've had a lot of fun running in the U.P. A lot of times it's a different kind of challenge because you don't always have that constant competition as you would downstate, but just getting to run -- I know everyone I'm racing against, and they're like my family.”

Road trip: “This past summer I met a lot of girls who run downstate and who are really good downstate. So I got to run with them, and just getting to compete against them a little bit … and run against better competition, girls who are going to be in front of me and much faster and having girls all around you all the time, it really pushes you harder. I can get pushed up here, but it's really fun getting to run downstate. I love it. … I think (downstate) they're kinda like, 'Who are you?' And I tell them I'm from the U.P., and they’re like, 'Oh, really?'”

Cheering us on: “I know a bunch of people who have run in the U.P., and we just get so much support from all of our communities. I think that's one cool thing about running in the U.P.: The whole community is always behind you and always supporting you. It's really everywhere we go. It doesn't matter if it’s your rival school or anything; they’re always supporting us, and I think it's a really special thing.”

Those before me, and after: “Obviously a runner in the U.P. like Lindsey Rudden (Marquette grad 2016/now runs at Michigan State), she did a lot of cool things up here. So I definitely respect her, and Colton (Yesney, Negaunee grad 2018/now runs at University of Michigan). Past runners in the U.P. have done well for themselves, I think. I'm hoping I can show (younger runners) that you can still be a good runner in the U.P. and show people what U.P. kids are made of. You can still do it just as well, and we have a little bit of extra fight.”