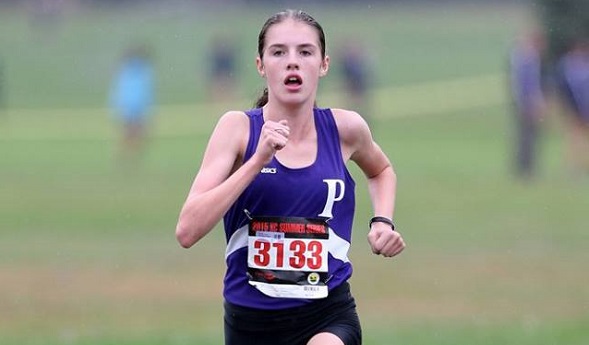 Forsyth has been one of the state’s fastest distance runners since starting her high school cross country career three seasons ago. But she’s made a jump to MHSAA championship contender this fall, showing it again by running a career record 17:21 to finish ahead of a loaded field at the Oct. 8 Portage Invitational and earn Michigan National Guard “Performance of the Week” for Oct. 3-9.

Forsyth finished seventh at the MHSAA LP Division 1 Cross Country Final as a freshman and 13th last season, and her 17:21 was more than five seconds faster than her best time of 2015. She also finished seventh in the 3,200 at the MHSAA Track & Field Division 1 Final this spring and ran the first leg of the Finals-champion 3,200 relay. Her school records are especially impressive considering the high regard for Pioneer’s program, which won three cross country and 16 girls track & field MHSAA titles under late coach Bryan Westfield, who died during the summer of 2015 after a fight with cancer. Forsyth is now coached by Nancy Boudreau, who took over last fall after serving as Westfield’s assistant for five years and also coached for a decade in Bowling Green’s running programs.

Coach Nancy Boudreau said: “Anne is just now starting to believe in herself. She is super motivated and is always striving to do her best. In the last year she has taken all aspects of training more seriously, especially the weight training and core training. She is also a tremendous team leader and keeps things very light in practice and at meets. She is well known for her inspirational pep talks before races, which get the girls psyched for the races.”

Performance Point: “We all got out really hard in the beginning, and I was kinda worried I wasn’t going to be able to hang with them,” Forsyth said of the Portage win. “Partway through I felt really good, and I started trying to push up the hills – trying to push the whole way. I was really surprised; throughout the season I’ve been staying with (the top runners) for about a mile, and they’ve been pulling away. It boosted my confidence that I stuck with them longer.”

This year’s jump: “Partly it’s an attitude change, just knowing that I can do it. When it hurts in the middle (of a race), if you don’t think you can do it, you just slow down and not really care. … We’ve (also) been doing slightly different training, going on slightly longer runs. Our workouts are more intense, and we’ve been doing a little weight training. It just makes me feel more consistent, like I don’t have as many really bad days.” 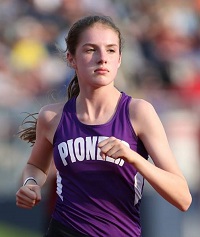 Full team ahead: “We’ve done really well. We’re trying to get everybody to get more consistent, all of us running well the same day. A lot of us know we can run faster, and it’s motivating to know we haven’t hit our peak yet.”

Pep talker: “It’s really random. I just pick something – it’s kinda dumb – but it gets everybody hyped up and excited. Just acting kinda crazy can shake out some of the nerves. I was always like that. I try to keep everybody loose (because) we tend to get nervous.”

Westfield wisdom: “He really taught us how to care about it. If we have a bad day, that it’s not the end of the world. He really showed … athletics can help you in every part of your life. He just showed a lot of compassion.”