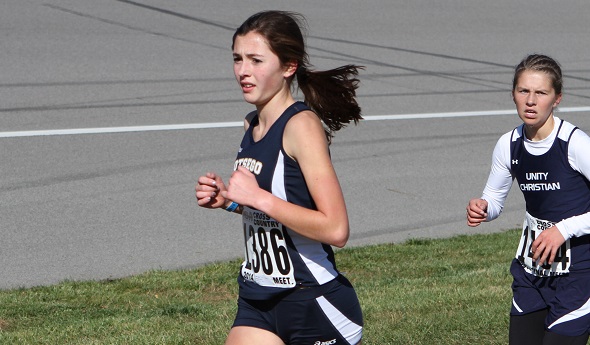 OTSEGO – Megan Aalberts was in middle school when she first realized the potential of her classmates and what their future running days could look like.

“Going into sixth grade and middle school, I could already see that the girls in my grade and a year behind me were really talented and super hard-working,” said Aalberts, a junior on Otsego High School’s girls cross country team. “We had a pretty good season in middle school, and then coming into high school and making it to state our first year was an incredible experience. We wanted to keep it going, and I’m hoping this year is really awesome.”

The Bulldogs have experienced unbridled success at the state level the past two seasons under coach Steve Long, a teacher at the school.

Otsego placed third in Lower Peninsula Division 2 at the MHSAA Finals in 2013 and was runner-up a year ago to Grand Rapids Christian.

Those were the top two Finals finishes in program history – and seem to have set the tone as an experienced group has begun its pursuit of the program's first MHSAA title.

The Bulldogs have shown consistency over the past decade, qualifying seven times for the LP Finals and recording five top-10 finishes. But last season’s accomplishment was built on youth, as there were no seniors among the top seven. All but one of that top seven returned this fall.

“We have a lot of experience, and most of the girls have quite a bit of state meet experience,” Long said. “It’s a huge advantage that these girls know what to expect and how to perform well on the big stage. We’re mixing in a few young runners and they’re feeding off the underclassmen. We’re excited to see what they can do.”

This year’s group remains young with Madison Secord as the lone senior. 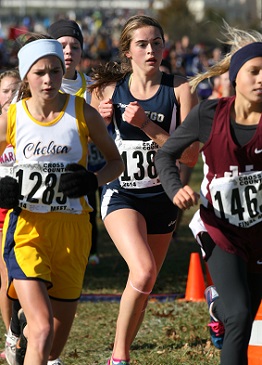 She joins a talented collection of juniors and sophomores, spearheaded by Aalberts, a junior who placed third overall at last year’s MHSAA championship meet.

“It was a really exciting feeling to know that everyone was coming back,” Aalberts said. “We just know that every day we’re going to try our hardest and push each other. Expectations are pretty high for our team, and our goal is to compete the best we can every day.”

The Bulldogs, ranked No. 2 in LP Division 2 this week behind Grand Rapids Christian, have achieved early success and gone unbeaten in the Wolverine Conference.

They also won the 16-team St. Joseph Invitational and followed that with a victory at the Paw Paw Invitational.

“I’m very happy with where we’re at, and we’re trying to stay focused on improving and getting better,” Long said. “The challenge this year is to not think we need to be perfect. We just have to focus on ourselves and what we can do.

“Go out there and try to do the best we can and run the way we always run. And that’s by having fun and loving what we do. I think they’re doing a really good job of that.”

Drobny, who was 27th at last year’s MHSAA Final, said there is some pressure to add to the program’s prior successes.

“There is a little bit of pressure, but now we can count on each other to work hard and not let each other down,” she said. “Having everyone back is helpful because we all have the same energy as last year and the same motivation and dedication. The state meet is our main focus, and that’s what we’re striving for.”

A couple key components of the Bulldogs are their competitive nature and close bond. 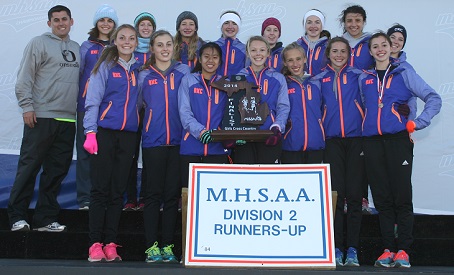 “How the girls get along has a huge impact on how we end up at the end of the season,” Long said. “The girls are a bunch of sisters and they love each other, but they are willing to go out and compete against each other when they are racing. It’s a good atmosphere.”

Aalberts said she and her teammates don’t go their separate ways at the end of the season. Instead, they stay connected through different events.

“We’re definitely like a family,” she said. “We’re super supportive of each other, and we’re really close. We had a Christmas party and Valentine’s Day party, so we are just in contact with each other after the season ends.”

Added Drobny: “We’re super close, and we spend so much time together at morning and afternoon practices. We run together in the offseason and in the summer, and that helps because we motivate each other to run faster and to beat each other.”

Although the Otsego is one of the smaller schools in Division 2, it still showcases depth. All 10 of the girls on the team clock times under 21 minutes.

“We’re pretty deep for a small school,” Long said. “And the goal continues to get better. We were second last year, but if we’re not better, then we’re still not going to be at the top of the podium.”

PHOTOS: (Top) Otsego's Megan Aalberts rounds the final curve at Michigan International Speedway on her way to a third-place finish at last season's Lower Peninsula Division 2 Final. (Middle) Erica Drobny, middle, runs with a pack on the way to finishing 27th. (Below) The Bulldogs pose with last season's MHSAA runner-up trophy; six of the top seven runners are back this fall. (Click to see more from RunMichigan.com.)