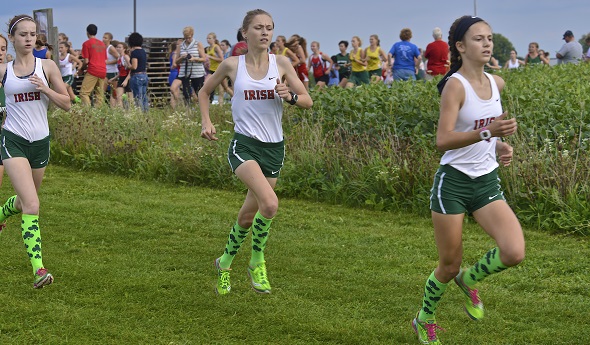 A total of 987 girls will launch from the starting line during four MHSAA Lower Peninsula Cross Country Finals on Saturday at Michigan International Speedway.

And a number of those athletes have plenty of experience crossing the finish line first over the last few seasons as well.

In all four divisions, the reigning team champions enter as favorites to win again, Birmingham Seaholm in Division 1 for the third straight season. Two individual champions – one from 2015 and another from 2014 – will also look to add to their accolades.

Click for all Finals qualifiers, a map of the course and links to buy tickets and watch the Finish Line camera on MHSAA.tv, and come back to Second Half later Saturday for coverage of all four meets. See below for many of the competitors to watch; Saturday’s first race begins at 10 a.m., with the final awards presentation slated to end at 4 p.m.

Seaholm has won the last two Division 1 titles and is the favorite to extend the streak to three straight despite graduating a few top runners for the second straight year. Senior Audrey Ladd and juniors Rachel McCardell and Emily Rooney took the top three places at their Regional at Grosse Pointe South, all in 18:12, as all seven Seaholm runners finished among the top 20. Ladd was 11th and McCardell 16th as the team’s top two at last year’s Final, when the Maples won by 46 points. Northville is the 2013 champion and finished fourth and third at the Finals the last two seasons, respectively. The Mustangs again dominated their Regional (at Willow Metropark) despite graduating their top three from last season. Junior Ana Barrott was the Regional champion in 18:35 and sophomore Nicole Cybul was fourth in 19:07. Pioneer won its Regional at Lake Erie Metropark ahead of No. 6 Saline and should make a big jump from eighth at last season’s Final with five back from last year led by junior Anne Forsyth; she was 13th last season and won her Regional in 18:16.

Otsego has been ranked No. 1 in Division 2 all but one week this season, with its top six runners back from the team that finished 83 points better than the field at MIS a year ago. Seniors Megan Aalberts and Sophie Hirzel – who finished fifth and sixth, respectively, at last year’s Final – took second and third at their Regional as Otsego placed all seven runners among the top 11 in the Division 2 race at Portage. Grand Rapids Christian is the only other team to occupy the top spot in the coaches poll this fall with four of its top six back from 2015 including senior Megan Schenkel. She finished 25th last season but won her Regional last week in 19:32 as the Eagles placed four among the top five. Grand Rapids Christian was third in 2015 behind also East Grand Rapids, which won its Regional by six last week over No. 7 DeWitt. The Pioneers have their top four back from 2015, led by junior Kate O’Connell, who was 29th at the Final and took sixth (19:12) in last week’s Regional.

Gone is reigning individual champion Holly Bullough, who graduated after leading St. Francis to the team title. But returning for the Gladiators are five others who ran, including fourth place Katelyn Duffing, fifth-place Emmalyne Tarsa and 12th place Joyana Tarsa. Duffing, a sophomore, won their Regional in 18:30, while Joyana Tarsa, a junior, was second in 18:36. Benzie Central was at the same Regional, finishing second while putting four among the top nine led by junior Sierra Pallin at 18:39. Four Benzie Central runners are back from the team that finished second at MIS in 2015. Lansing Catholic finished fourth last fall and is again paced by now-junior Olivia Theis, who finished ninth at the Final and won her Regional last week in 18:26 ahead of sophomore teammate Lauren Cleary (18:50) and freshman teammate Jaden Theis (18:57.2). Olivia Theis and Cleary are among four Cougars returning to Brooklyn.

No seniors ran on Sacred Heart’s first championship team since 1999, and six of seven runners are back this weekend including fourth-place Alexis McConnell, fifth-place Bailley McConnell and 10th-place Scout Nelson. All seven of this year’s runners were among the top nine at their Regional, won by senior Alexis McConnell (18:43) ahead of Bailley (18:44), sophomore Cammie McConnell (19:19) and sophomore Lauren MacDonald (19:37). Reigning Finals runner-up Harbor Springs should be in the hunt again after placing the top two at its Regional in junior Alyssa Kihnke (19:14) and sophomore Ellie Fleming (19:41) and seven of the top 17. Pewamo-Westphalia was ninth in Division 3 last season with only two seniors; this season’s team has four freshmen but also three of the team’s top four Finals finishers in 2015. Freshman Aubrey George won her Regional by 40 seconds in 19:44 as the Pirates took seven of the top 11 places.

Individuals: Battle Creek St. Philip senior Ava Strenge was runner-up last season and won Division 4 as a sophomore; she’s a favorite again after claiming her Regional in 18:38. She was followed at the Regional by Athens junior Corra Hamilton (19:38) and Kalamazoo Hackett junior Mary Ankenbauer (19:52); Hamilton was 39th at last year’s Final and should make a jump, and Ankenbauer was third and will be in the mix. Springport junior Caitlin Henne returns after finishing sixth and Concord junior Samantha Saenz is back after placing seventh a year ago. Saenz (19:14) won her Regional, as did Marion senior Kyle Sikkema (19:19), Walkerville senior Emily Merten (20:05), Auburn Hills Oakland Christian senior Megan Nichols (19:19) and Plymouth Christian sophomore Sienna Ruiter (20:59).