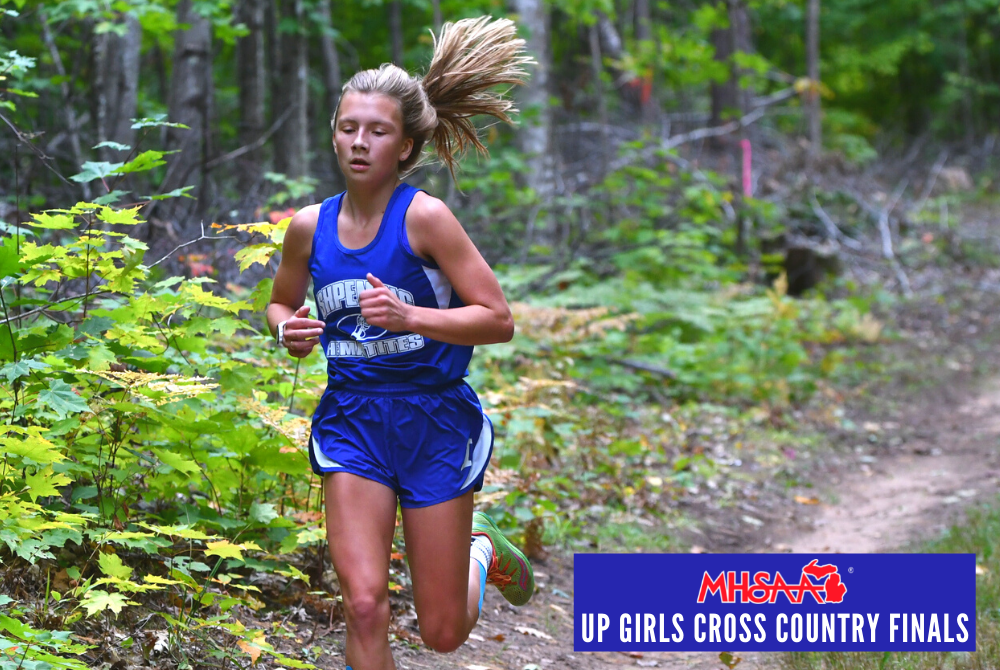 There is plenty of potential for new champions to emerge Saturday at the Upper Peninsula Girls Cross Country Finals at Gentz’s Homestead Golf Course in Marquette – and also opportunities for past champions to find their ways back to the front.

Returning individual champions are back in all three divisions. But whereas 2020 winner Paige Sleeman is returning for Houghton in Division 1, the past champions in Divisions 2 and 3 are from two seasons ago – Hancock junior Maylie Kilpela and Rock Mid-Peninsula senior Landy Koski, respectively. All three will have to outrun speedy contenders to cross the line first again – Sleeman from teammate Paige Seagren, and Kilpela and Koski from last season’s runners-up Lola Korpi from Ishpeming in Division 2 and Hattie Cota from Munising in Division 3.

The team competition for the most part features a number of teams used to being at the front of the pack. But watch in Division 1 for Negaunee, running to earn its first team title in nearly 40 years.

Saturday’s races begin with the Division 1 girls at 11 a.m. and conclude with the Division 3 boys at 1:30 p.m. Check back Saturday evening for coverage, and see below for more teams and individuals to watch. (Click for race information and competitors.)

Negaunee is seeking its first Finals championship in this sport since winning three straight in the former Class C-D from 1981-83. The Miners did not run at the 2020 Finals and did not have enough participants to place as a team in 2018 or 2019, but they return this weekend with seven runners including junior Endla Harris – who ran at the 2019 Finals as a freshman. Houghton is another favorite after edging Marquette by two points last season to claim its first Finals championship. The Gremlins return three of their seven runners from 2020 led by reigning individual champion Paige Sleeman and third-place Ingrid Seagren; both are seniors. Westwood finished fourth last season and returns three runners as well including sophomore Retta Boburka, who finished 15th a year ago.

Individuals: Houghton is bringing the star power with Sleeman winning last season’s Final by five seconds and Seagren seeking her first championship after running sixth as a freshman and third as both a sophomore and junior. Menominee similarly is led by a speedy duo as senior Hayden Buck was sixth and junior Attica Brandt finished seventh in 2020. Total 11 of last season’s top 20 finishers will be running this weekend. Escanaba senior Ciara Ostrenga also returns after finishing 10th, and Calumet junior Kiira Berg was 11th.

St. Ignace has finished among the top two the last four seasons with championships last year and in 2017, and five of last season’s top six Finals runners are back this weekend – including four who placed among the top 16 overall – led by sophomore Brady Wisteria (fourth) and senior Mariana Zaragoza (ninth). Three from Ironwood’s third-place team last fall also are back, led by junior Lilley Smith (sixth in 2020), and Hancock returns three of last season’s top nine and four of the top 20 placers including junior Maylie Kilpela (third), senior Sierrah Driscoll (fifth) and senior Adia Keranen (eighth). Kilpela was the individual champion in 2019. Neither Wakefield-Marenisco nor West Iron County will run enough participants to accrue a team score.

Individuals: Last season’s top 10 included only one senior, meaning a fast and experienced field will be back in contention. Leading the way is Ishpeming sophomore Lola Korpi, who finished second as a freshman and only 14 seconds off the lead, but 28 seconds ahead of the rest of the pack. Senior teammate Taylor Longtine also is back after finishing seventh last season.

Munising broke Chassell’s three-year hold on the title in 2020, and four of the top 19 individual placers will run for the Mustangs this weekend including junior Hattie Cota – last season’s runner-up – and junior Monique Brisson, who finished ninth. Dollar Bay, seeking its first team title since 2010, was fifth last season but returns all five of its runners led by senior Kaylee Cavis, who finished 15th individually. Newberry brings back three from its third-place 2020 team led by sophomore Kaylen Clark, who finished 10th overall. Chassell does bring back four of its top seven from a runner-up team Finals finisher.

Individuals: Total, 11 from last season’s top 20 also return in Division 3. Cota finished 11 seconds off the lead last season and will match up again with Rock Mid-Peninsula senior Landry Koski, who was fourth last season and won the individual championship as a sophomore. Eben Junction Superior Central junior Madisen Begovac also should be in the mix after finishing seventh last season.

PHOTO Ishpeming’s Lola Korpi sets the pace at the WIN Meet earlier this fall at the Negaunee Township Field. (Photo by Cara Kamps.)