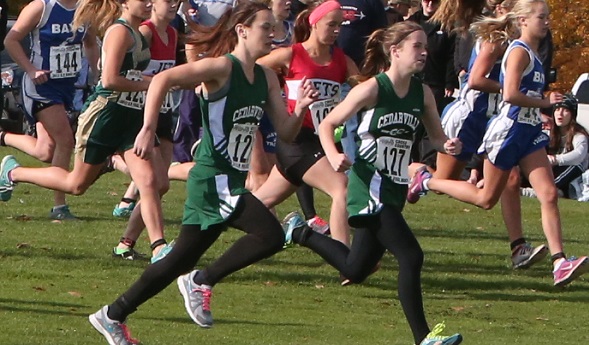 In Division 1, Marquette is seeking its 29th MHSAA team title – owning the most by far of any school in either peninsula. Ishpeming in Division 2, meanwhile, is piling up accomplishments it hadn’t achieved in 35 years – and can add the crowning achievement with its first Finals win since 1980.

Somewhere in the middle, rivals Cedarville and St. Ignace should battle in Division 3 in what could be the most exciting race of the day.

Here's a look at some of the teams and individuals expected to cross the finish line first. Click for Saturday's race schedule and a list of all qualifiers.

Marquette has won more than twice as many Upper Peninsula Finals as any other school – Calumet happens to be second on that list with 11. The Redettes are heavy favorites again with four of the top nine individual finishers from last season back after the team scored 62 points fewer than the field. Junior Lindsey Rudden and sophomore Amber Huebner finished second and third, respectively, last season, while seniors Calla Martysz and Shayla Huebner came in eighth and ninth. But Calumet returns three of its top five, led by sixth-place Leah Kiilunen and 15th-place Corey Miller; both are juniors and Kiilunen finished second in 2012.

Individuals: Three more of last season’s top 15 will run this weekend. Escanaba senior Aimee Giese will race for her third top-10 finish after coming in fourth as a sophomore and 10th as a junior. Gladstone sophomore Leigha Woelfer was fourth last season in her first MHSAA Final, and Sault Ste. Marie senior Michaela Rushford improved from 17th in 2012 to 13th last season. Menominee senior Lilly Johnson also will try to finish on a fast note – she came in eighth as a freshman.

Ishpeming is favored to win its first MHSAA title since 1980 – but it’s been that kind of season for the Hematites, who also won their Mid-Peninsula Conference title for the first time since 1980. Ishpeming is shining with a lineup featuring five freshmen and two sophomores including Khora Swanson, who finished eighth a year ago. Westwood, second in the M-PC, is led by league individual champion Kathryn Etelamaki, a junior, and junior Anastasia Bjork, who finished ninth at last season’s Final. Hancock is keyed by two top-15 finishers from 2013 – 10th-place Kaylor Holmstrom, a senior, and junior Ashley Aho, who came in 14th.

Individuals: Iron River West Iron County senior Tori Harris-Hogaboom finished eighth as a freshman, sixth as a sophomore and seventh as a junior. She’s the second-highest returning finisher to this race, behind Norway junior Kyra Johnson, who finished fourth in 2013. Ironwood senior Katie Piispanen finished 14th as a sophomore.

Cedarville was champion in 2011 and runner-up last season and 2010, and returns a pair of top sophomores that lead a team with six underclassmen total. Emma Bohn is back after finishing third, and Leila Schlosser came in 12th as a freshman in 2013. But St. Ignace should provide an incredible challenge with its top five finishers back from last season’s runner-up in Division 2. Junior Lily Calcaterra was the individual runner-up in that race and in Division 3 as a sophomore, and sophomore Rosy Shimkovitz and junior Katie O’Rourke finished 11th and 12th, respectively, last season.

PHOTO: Cedarville's Emma Bohn (127) finished third in the Division 3 race a year ago and leads this season's favorite. (Photo courtesy of RunMichigan.com/Paul Gerard.)