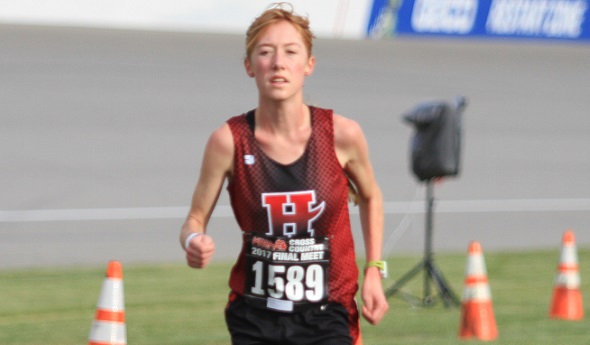 Michigan International Speedway will showcase Saturday the last MHSAA Finals for a pair of the most successful champions all-time in this state.

Hart’s Adelyn Ackley will run for her third individual championship while attempting to lead her team to a repeat in Lower Peninsula Division 3. Rockford’s Ericka VanderLende won last season’s Division 1 individual title with one of the fastest 5K times in Finals history, and she enters this weekend with the state’s fastest time this fall.

A total of 958 runners will take to the course at MIS for the girls races, which begin with Division 4 at 10:50 a.m. – the boys start the day with their Division 4 at 9:30. Below are some of the teams to watch and a glance at each of the individual fields as well. Click for all Finals qualifiers, a map of the course and links to buy tickets and watch the Finish Line camera on MHSAA.tv, and come back to Second Half later Saturday for coverage of all four meets. (NOTE: “Rankings” of individual runners below are based on data at Athletic.net, which orders runners based on the single fastest times they’ve run this season.)

Troy held off Northville by five points to claim last season’s championship, but the Mustangs have six of their seven runners back including sophomore Yasmine Mansi (ninth in 2017) and senior Nicole Cybul (18th). Those two rank ninth and 11th, respectively, among runners regardless of division this fall. All five scorers are back from the Clarkston team that finished eighth a year ago, and Ann Arbor Pioneer brings back four of its top six from the team that finished fourth.  Junior Zofia Dudek placed 20th individually for the Pioneers last fall, and freshman Sarah Forsyth ranks 16th regardless of division among this season’s best.

East Grand Rapids has finished runner-up twice (2015 and 2016) since last winning the championship in 2011, and is back in Division 2 after placing 13th in Division 1 last fall. The top three finishers from that team return, and six runners rank among the top 29 in Division 2. Petoskey finished 19th last season but without a senior; five returnees are joined by two freshmen, and sophomore Emma Squires ranks seventh in the division. DeWitt has three runners ranked among the top 35 and returns four from the team that finished third last season, led by senior Ashley Shipps (13th individually in 2017).

Hart has ranked among the top teams in the state regardless of division the last two seasons, keyed in part by a number of members of the Ackley family. Adelyn Ackley will attempt to become the 26th three-time girls Finals champion, and her top time of 17:00.6 ranks her third in the state regardless of division. Total, five of Hart’s top six from last season are back including as well sophomores Savannah Ackley (sixth place individually) and cousin Lynae Ackley (20th). Calvin Christian is seeking its first championship in this sport after finishing third a year ago, and returns four of the top five runners from that team. Clare was fifth last season without a senior; senior Lainey Veenkant (12th individually) leads five returnees and two freshmen heading to MIS.

The Irish have won the last three Division 4 championships, last year by 99 points – but they’re in for perhaps the toughest race of this run against Saugatuck, which edged Sacred Heart to win the Division 4 race at the Oct. 6 Portage Invitational (although Sacred Heart was missing its fifth runner). The Irish have five of their seven runners back from last year’s championship team, with senior Scout Nelson coming in third individually in 2017, junior Desiree McConnell eighth and senior Lauren MacDonald 19th. Total, Sacred Heart has four of the top 19 ranked runners in Division 4. Saugatuck has three of the top 13, including senior Thea Johnson, who finished fifth in Division 3 in 2017. The Indians as a team last season finished fourth in Division 3 without a senior; the five scoring runners are back. Pittsford was 10th in Division 4 last season with just one senior, and five of the top six runners from that team will run this weekend led by senior Renee Osborne (16th individually in 2017).

PHOTO: Hart’s Adelyn Ackley charges down the final stretch on the way to winning her second straight Division 3 championship last fall at MIS. (Click for more from RunMichigan.com.)