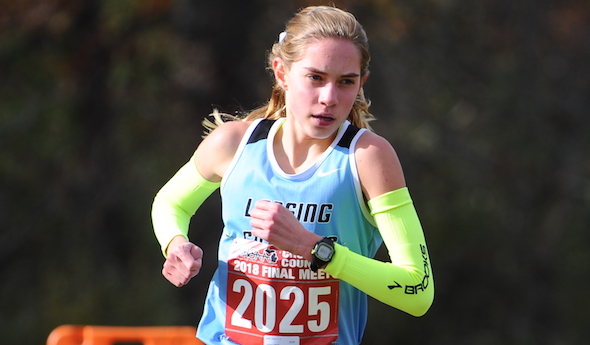 BROOKLYN — The crown is staying in the family.

Cougars junior Jaden Theis won with a time of 18:01.9, finishing 14.6 seconds ahead of Makenna Veen of Plainwell.

The first three finishers were juniors. There were no seniors in the top 11.

“I’ve got to keep the tradition going,” Theis said. “It just feels really good to keep the last name out there ruling D2.”

Last year, Olivia Theis set the Finals record with a time of 16:52.1, breaking a mark held by 2009 Foot Locker national champion Megan Goethals of Rochester. So, it helped that Jaden didn’t have to contend with her sister this year. It also helped being healthy.

“I was sixth last year,” she said. “My ankle was bothering me.”

Jaden had the benefit of getting sisterly advice from an MHSAA record holder. 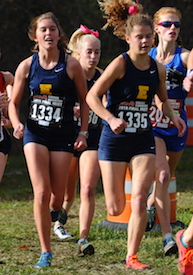 “Just stay calm, relax, have fun out there,” Jaden said. “I wasn’t too worried about time today, knowing the course conditions. I’m happy with it.”

Veen has finished in the top five three times at MIS, with one season remaining. She was fourth as a freshman, fifth as a sophomore and second this year.

“I honestly didn’t expect to place as well as I did,” Veen said. “But I race well in these nasty conditions.”

East Grand Rapids won the team championship in commanding fashion, scoring 51 points to win by 108 over runner-up DeWitt. The Pioneers had their five scoring runners across the line before DeWitt got its second finisher.

The Pioneers moved back to Division 2 after placing 13th in Division 1 last year. Their times Saturday would’ve made them competitive with Division 1 champion Clarkston. Clarkston’s first two runners were faster than East Grand Rapids’ by considerable margins, but the Pioneers had the advantage by close margins with their third, fourth and fifth runners. The teams would’ve tied, 147-147, if East Grand Rapids ran the same times in Division 1, with Clarkston winning the sixth-runner tie-breaker.

It was the sixth MHSAA Finals championship for East Grand Rapids, which last won in 2011.

PHOTOS: (Top) Lansing Catholic’s Jaden Theis comes around a bend during the Division 2 Final on Saturday at MIS. (Middle) East Grand Rapids’ Katie Hessler (1334), Anna Petr (1335) and Audrey Whiteside run as part of a pack early in the Division 2 Final. (Click for more from RunMichigan.com.)