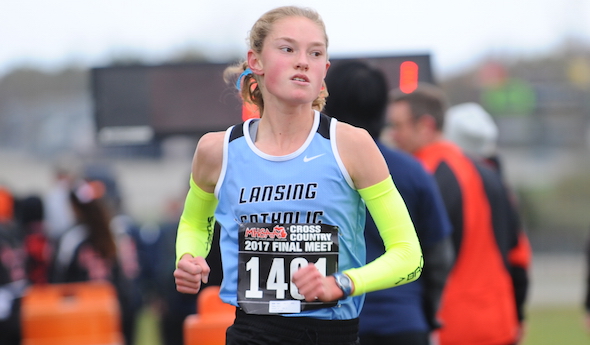 BROOKLYN — Of the thousands of girls who have run in the MHSAA Cross Country Finals at Michigan International Speedway, only one had ever broken the 17-minute barrier.

Winning the 2009 Lower Peninsula Division 1 meet in 16:54.8 just a month before winning the national Foot Locker championship made Rochester’s Megan Goethals a legend in the sport.

So, where does that put Olivia Theis?

Theis, a senior at Lansing Catholic, took down Goethals’ record by blistering a muddy MIS course in 16:52.1 to win the Division 2 title. Her performance also led the Cougars to the team championship.

“I didn’t expect it, especially coming in as a freshman,” Theis said. “I just had no idea how good I could be. I think my team has definitely pushed me to be the best I could be.”

It was the first individual title for Theis, who improved from 19th as a freshman to ninth as a sophomore to second as a junior when Lansing Catholic ran in Division 3.

Defending champion Kayla Windemuller of Holland Christian stayed with Theis until the second mile. A 5:29 second mile, followed by a 5:11 third mile, allowed Theis to break the record and win by a landslide.

“I didn’t know if she was going to come with me or not,” Theis said. 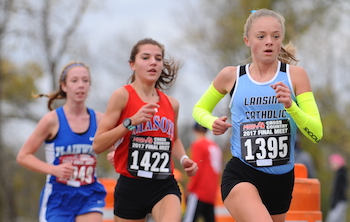 “We knew going in we were going to have to race really hard, and that’s just what we did,” Cleary said.

It was the first MHSAA championship for Lansing Catholic, which took second in Division 3 in 2000 and 2016.

Olivia Theis and Frost ran in all four meets as the Cougars progressed from sixth place in 2014 to fourth in 2015 to second last year.