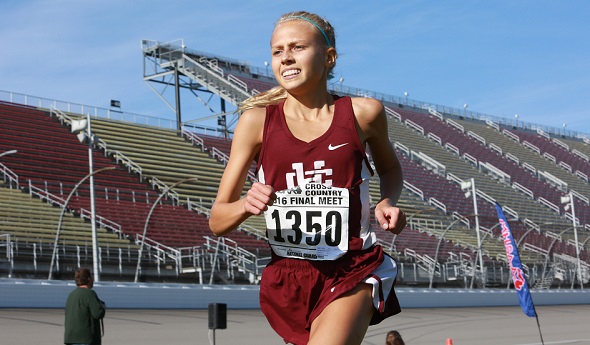 And even when the Holland Christian senior loses her way, the final outcome doesn’t change.

She still, however, broke 18 minutes, won the race and laughed about her misdirection snafu.

“I was supposed to go straight but turned, and people turned me around,” Windemuller said. “So I was extremely surprised with my time considering I was just doing a tempo run and I went the wrong direction. I was trying to negative split each mile and then I came across the line at 17:57. I was super surprised by that.”

Windemuller, 17, in the midst of her final cross country season, is one of the elite runners in the state and is setting her sights on repeat success while preparing for college.

Last November, Windemuller put forth a dominating effort in winning the LP Division 2 title by an impressive 24.5 seconds over St. Joseph’s Anna Fischer.

Windemuller and Freyhof, who live five minutes from each other, had fierce competitions against each other the past three years, but Freyhof graduated from Hamilton and now runs for the University of Nebraska.

“It’s honestly different now,” said Windemuller, who also has won the 1,600 and 3,200 meters at the past two LP Division 2 track & field championships. “We had our first meets this year and it’s weird to not have her there. I trained a lot with her this summer, and she helped me with the college process.

“She’s not here, but I do have new competition with Olivia and Jaden Theis (Lansing Catholic), who moved up to Division 2. I’m excited to race against them.”

Windemuller and Freyhof built a strong relationship on and off the course while competing in the same conference.

“They made each other better runners, and Kayla loved racing against her,” Holland Christian coach David DeKruyter said. “They pushed each other, but now she doesn’t have to race against the top girl in the state at every meet.”

DeKruyter was Windemuller’s sixth-grade teacher at Pine Ridge Elementary. He has seen first-hand her development into a talented runner over the course of the last six years.

“She was a pretty good runner back then, and we knew right away that she was going to be a standout runner,” DeKruyter said. “She’s just very motivated. She loves running, she loves the challenge of it and she thrives on competition. Those ingredients put it together for her to excel as a runner.

“She’s been given a God-given talent of running and she’s using it and developing it as best she can right now.”

A strong work ethic has factored into Windemuller’s success. And it carries over to her studies as well. 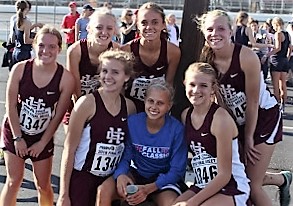 “I really want to see how fast I can get, and my hard work shows in school, too,” she said. “My grades don’t come naturally to me, and I have to work hard to get good grades.

“My whole work ethic shows in the classroom, and then I try to show that when I run. I try to be the best version of myself that I can be. My parents work hard, and they taught me to work hard.”

DeKruyter has seen a different side of Windemuller as a senior. She’s shown leadership and served as a role model on a strong squad that is currently ranked No. 5 in LP Division 2.

“She seems to be a much more mature athlete,” he said, “as far as understanding the training at the level she is racing to be more of a team leader. She’s taken and developed her role as a team leader to a completely different level than she ever has before.

“She has pulled the other girls along with her, and it’s nice to have a team back her up and make this is a special year for her.”

Windemuller has seen a change in herself, too.

While still focused and driven, she’s trying to relax and not be as serious as in the past.

“Last year I got up-tight, and I wanted everything to be perfect,” Windemuller said. “I wanted to see myself grow as a runner, and I was too focused and I worked too hard.

“This year on the easy workout days I run with my teammates. I’m more relaxed this year and it’s fun to do easy days with my teammates and bond with them more. They support me a lot and like me to reach my goals, but I like to see them reach their goals.”

Windemuller loves the talent and dedication of this year’s group.