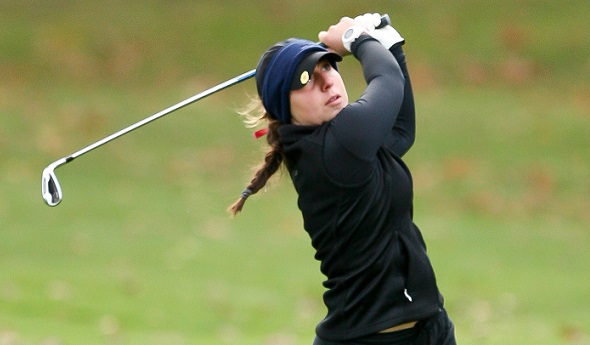 MIDLAND — There are a lot of reasons why a young person from Michigan would want to head south to spend her college years.

Soaking up some sun on the beach or bidding adieu to blizzards and wind-chill factors rank high on the list of perks, but not for Stephanie and Alexis Carras of Midland Dow.

For them, better year-round weather means more quality time on the golf course. Stephanie, a senior, will compete collegiately at the University of Georgia, while Alexis, a junior, has been looking into Wofford College in South Carolina as she sorts through recruiting offers. Both destinations will offer the sisters the opportunity to play through the winter.

Golf has become that kind of priority for the Carras sisters, who have become two of the best golfers in Michigan in a relatively short amount of time.

As members of a golfing family, they were exposed to the sport as youngsters. However, both focused primarily on basketball, while Stephanie also played volleyball. It wasn't until just before high school that they began to take golf seriously.

"I started around my eighth-grade year," Alexis said. "I started doing tournaments then. Then my whole life basically became golf."

Stephanie's freshman year was the senior year of older sister Kharissa, who came out for golf that season for the first time after three years on the volleyball team. That combination elevated a Dow team that was eighth in its Regional the previous year to a third-place finish in the 2013 MHSAA Lower Peninsula Division 2 tournament.

It was an eye-opening experience for Stephanie.

"It was actually after the state tournament my freshman year that I decided I would just go all-in and practice really hard in golf," Stephanie said. "When I went to that tournament, it was the first tournament that was a big deal. There was a lot of pressure, and I loved it. I loved the competitiveness. I loved the pressure." 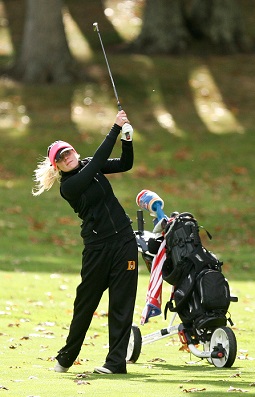 Stephanie Carras has thrived in the pressure of the MHSAA Finals in her first three years of high school, finishing among the top four individually each time. After taking third as a freshman, she was fourth in 2014 and second by two shots in 2015. Alexis tied for third last season, three shots behind champion Karina VanDuinen of Muskegon Reeths-Puffer.

Their efforts led Dow to the best finish in school history, a second-place showing behind Birmingham Seaholm. The Chargers, ranked No. 1 coming into the tournament, were two shots behind Seaholm after the first round, but shot 340 in the second; Seaholm shot 329.

"We were just a little off, but Seaholm played well," Dow coach Doug Bradford said. "It wasn't like we really tanked the second day. We didn't play quite as well and Seaholm played well. The kids were disappointed, of course. By the time we got someplace to eat, they realized second in the state is a great accomplishment; that was the best in school history. To be one of the top two teams in your division, what a nice accomplishment it was; it was a real successful year."

Before 2013, Dow wasn't a factor on the state golf scene.

The Chargers qualified for the Finals only four times during the first 41 years that the MHSAA sponsored the sport. They made the top 10 only once, taking eighth in 1982. The last three years have been the best in school history, as the Chargers took third in 2013, fifth in 2014 and second in 2015.

"They want to play with those good teams," Bradford said. "A few years ago, before we got to this, the kids were intimidated if we went down and said, 'We're playing Rochester today,' They would've had a really hard time with that. That would not have been fun. They wanted to play schools similar to them. Now the girls look forward to that challenge, hoping we play with the better teams in the tournament. I explain to them that usually we do. That's an honor thing. People setting up the tournaments recognize we're a strong team, so they're putting us with other strong teams."

Having two strong golfers at the top of the lineup is a great start, but is meaningless if there isn't enough depth to propel a team high in the standings. 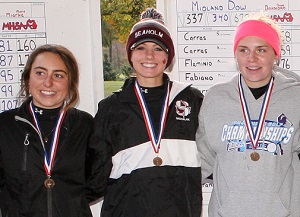 The Chargers have a group of players behind the Carras sisters who post consistently solid scores and have experience playing in big tournaments.

Mina Fabiano averages 87.5, shooting in the 90s only once in eight 18-hole rounds. Grace Baillargeon averages 89.8, Caroline Szabo 90.4, Morgan Deiters 90.9 and Tatum Matthews 93.8. The Chargers have eight players who have shot 87 or lower at least once this season.

"Our whole team is doing so well," Stephanie Carras said. "It's incredible. We always know we can lean on each other. It's a very fun team to be part of. It's more fun when you're with a team, because you're happy when other teammates do well. Even if you have an off day, someone else will come in with a low score who can make it better and pick you up."

Stephanie Carras averages 72.8 for 18 holes, winning five of her seven tournaments. Her 69 in the Frank Altimore Invitational tied a school record. Alexis Carras averages 75.9, winning three of her eight tournaments and taking second to her sister twice. In nine-hole play, Alexis has won three of Dow's four events. Stephanie has won two nine-hole matches, tying for first with Alexis once.

"We used to play basketball together," Stephanie said. "When we'd do summer camps, we'd be on opposite teams. We played different positions, but we always liked to guard each other.

"We're very competitive, but also happy to see the other one do well, too. If I get beat, I'd rather it be by my sister."

Bill Khan served as a sportswriter at The Flint Journal from 1981-2011 and served as a correspondent the last three years for Second Half. This is his final report, as he recently accepted a position with the Livingston Daily Argus & Press. He can be reached at billkhan35@gmail.com.