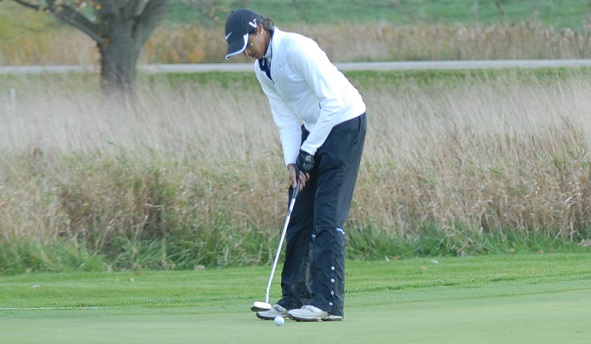 ALLENDALE – It was a case of mixed emotions for Bloomfield Hills Cranbrook-Kingswood's Cordelia Chan.

The junior standout was elated to become the individual champion at Saturday's MHSAA Division 3 Final, but also heartbroken by her team's runner-up finish.

Chan posted a two-day total of 157 at The Meadows at Grand Valley State University to win medalist honors.

She was three shots better than teammate Greer Clausen, who finished runner-up with a 160.

Chan was the only player in the field to break 80 in both rounds. She fired a 5-over 78 Friday and closed with a 6-over 79 Saturday.

“I'm feeling kind of upset because my team didn't win, and then I kind of feel regret because I tripled the last hole and there were some putts that I did leave out there,” Chan said. “But I do feel happy that I won. I wish I could've had both.”

In the closest team competition in recent Finals history, a fifth score tiebreaker was needed to decide the champion.

Top-ranked Detroit Country Day and second-ranked Cranbrook-Kingswood were knotted up with identical scores of 707 after 36 holes, but the Yellowjackets won based on the combined aggregate of the fifth score from both days.

It was the first MHSAA Finals title for Country Day in girls golf. The program has been in existence since 2002.

“We've always been rivals with Cranbrook, a friendly rivalry, and we didn't play our best today and they played really well. It's just a good thing we had a good day yesterday (Friday), and it couldn't be any closer coming down to that fifth score.” 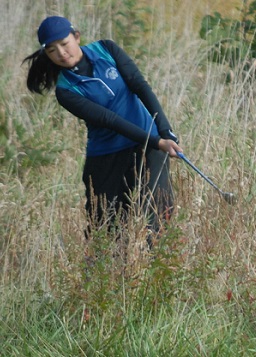 Senior Ellie Miller led Country Day with a 162 total and was third overall following rounds of 82 and 80.

Junior Nicole Junn finished at 179, while sophomore Simran Brar and senior Monika Hedni came in at 183 and 184, respectively.

“We're just so happy right now,” said Miller, who finished among the individual top 10 for the second straight season. “We didn't think this would be a reality and now it is. We really worked together this season and we're all really close friends.”

Hedni thought her team had won by a single stroke before she was corrected by her coach.

“We're in a little bit of shock, and thank God we all pulled through,” Hedni said. “We're really happy and excited, and we really wanted to improve this year and play well.”

Country Day opened with a 347 and took a commanding 13-stroke lead into Saturday's final round.

However, Cranbrook-Kingswood stormed back with its own 347 to even the score.

The Yellowjackets edged the Cranes by one stroke at Regionals.

“They told us coaches that with the possibility of bad weather, if they couldn't get 18 holes in the second day, then the first day scores would stand,” Steffan said. “We talked about having to come out strong in case we didn't play (Saturday), and I think the girls were nervous today because they knew they were ahead.

It was the second consecutive runner-up finish at the Finals for Cranbrook-Kingswood, which finished two strokes back last season.

Cranes coach Mark Moyer commended his team for improving by 13 strokes from Friday, but he was disappointed by the final outcome.

“It's real tough,” he said. “I knew it would go to the fifth position, but I didn't know it was the aggregate of both days. The girls are obviously disappointed with the what if, what if, but everybody can do the what ifs, so you have to let it go.

“With the group that played today, there was only one senior, so we have a lot of girls coming back and we'll use this as a learning experience to move forward. I congratulate Country Day on the job they did.”

Moyer was thrilled by the play of Chan, who placed runner-up in last year's Finals.

“It's tremendous, and she has worked so hard, not only during the season, but starting back to early spring,” Moyer said. “It's really impressive to see a young lady that can pull it together, and she's only a junior. It's exciting to know we have her coming back next year.”

“It was more about the team,” she said. “I wanted to play well for my team because I know I'm one of the leaders, but winning first is kind of cool, too.

“I knew it was going to be close because the players before me were playing well, too. I just wanted to wait and not get too excited.”

PHOTOS: (Top) Detroit Country Day's Monika Hedni follows through on a putt during Saturday's Division 3 Final. (Middle) Eventual individual champion Cordelia Chan of Cranbrook-Kingswood fires a chip out of the rough at The Meadows. Click to see more from High School Sports Scene.)