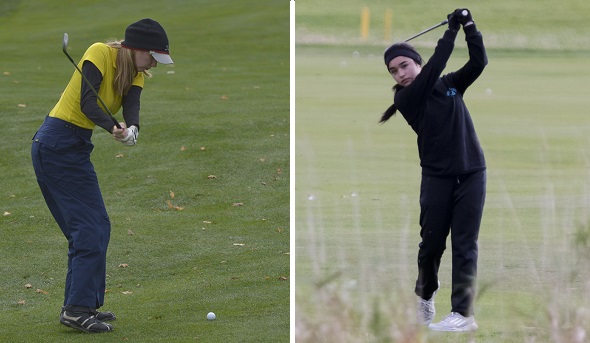 But that’s not foremost on her mind this morning.

“I’m not focusing on that,” Cox said. “I’m focusing on striking the ball well, not making tactical errors, just going out and having fun in my last high school tournament.”

The 18-year-old is the only girl from northern Michigan to win a Lower Peninsula title since the MHSAA started offering a postseason tournament in 1973.

“They are two of the best, if not the best, (girls) golfers to come out of this area – ever,” Glen Lake coach Paul Christiansen said. “And Anika is just a sophomore, which is amazing.”

Cox and Dy have played in numerous high school and junior tournaments together. They text frequently.

And when asked, they’re genuinely excited to talk about the other.

“She can hit the ball so far,” Dy said of Cox. “She eats the short courses alive. She’ll drive the green. She’s so long and powerful.”

“She’s very focused,” Cox said of Dy. “She doesn’t make a lot of mistakes. She might not hit it as far as me sometimes, but she makes up for it with a really good short game.”

That’s been evident this fall as Dy has lowered her 18-hole average nearly seven strokes, dropping from 77.1 to 70.5.

“I’m hitting the ball a little better, but it’s mostly been my putting,” she said. “Each course is different and you have to adapt to the greens. I think I’ve adapted better this year.”

Dy, who shattered the women’s course record at the Grayling Country Club with a 65 in August, agreed she’s keeping the ball in the fairway better, and it’s enabled her to “score well’ even when she’s not at the top of her game.

The 15-year-old won last Thursday’s Regional on The Meadows at Grand Valley State University with a 3-under 70. That was the same course where she fired a 79-77 in last year’s MHSAA Final. 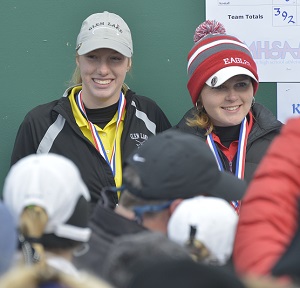 “I had a pretty good day, but honestly it was not my best because I had a stretch where I struggled and bogeyed a couple holes,” she said. “I wasn’t hitting it as well. But my attitude and positive thinking kept me going. I kept it in the present and didn’t think about what happened because I knew I couldn’t change it.”

Dy’s round included an eagle.

“She missed another eagle when a 20-foot putt just lipped out,” Nolan said. “Overall, she played solid golf.”

So did her teammates. West shot a 309 and placed four golfers in the top six. Hunter Kehoe was second with a 76, Megan Jenkinson tied for fourth with an 81 and Grace Ellul tied for sixth with an 82.

“They were excited,” Nolan added. “When we looked back at our scores (at The Meadows) last year we knew we could do better. We wanted redemption.”

“Hunter’s improved so much,” Nolan said. “Last year she had a few rounds in the 70s, but she was consistently in the low 80s. Now, she’s got into a streak of shooting in the 70s, and I’m excited for her.”

Dy said the Titans, who have won 12 tournaments in a row, celebrated after the Regional, but not like last year.

“I think we expected it,” she said. “We were super happy, but our focus now is on states. We know there will be a lot of good teams in the Finals. We just want to do our best.”

West is ranked No. 2 in Division 1 behind Rochester, which won its Regional with a 289. Rochester was led by Brooke Busse’s 69.

Cox, meanwhile, had to contend with windy conditions last Friday at Manistee Country Club to win her Division 4 Regional. She shot a 79 – her highest score of the season.

“I didn’t play as well as I would have liked,” she said, “but the conditions were by far the worst of any Regional.” 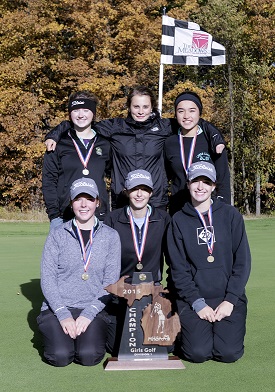 “We had sustained winds of 20 to 30 miles-per-hour,” Christiansen said. “Club selection was really difficult.”

It was the fourth consecutive Regional crown for Cox.

“Not too many kids are able to win a Regional event four years in a row – in any sport,” Christiansen said. “That, in itself, is a representation of how consistent she’s been over the years.”

Cox is averaging just over 74 a round, nearly the same average she sported a year ago. But her scores have been more consistent. A year ago, they ranged between 69 and 83. This season she’s been in the 70s every tournament.

She’s done that despite being sick a couple weeks.

In addition, Cox, who has committed to Bowling Green, reached the semifinal round in the 100th Michigan Women’s Amateur in August, losing to eventual champion Allyson Geer by a stroke on the final hole.

“When you count her summer and fall, she’s had an outstanding year,” Christiansen said.

Cox qualified for the MHSAA Finals as an individual, like last year, which means she will not play in the same group with any individual contenders whose teams qualified.

“It might hinder you a little, but at the same time I’m going to play my game,” she said. “It doesn’t matter who I’m playing with because I’m playing against the course.”

Christiansen expects Cox to go into the Finals excited and confident. His only concern?

“I hope she doesn’t put too much pressure on herself to do well,” he said.

For one thing, Christiansen added, you can’t control what your competitors are doing.

“It’s not like basketball where you can play better defense and keep (opponents) from scoring,” he said. “You just have to go out, do your thing, do the best you can and what happens, happens.”

What Christiansen hopes happens is this: “That she ends (her high school career) with a third championship.”