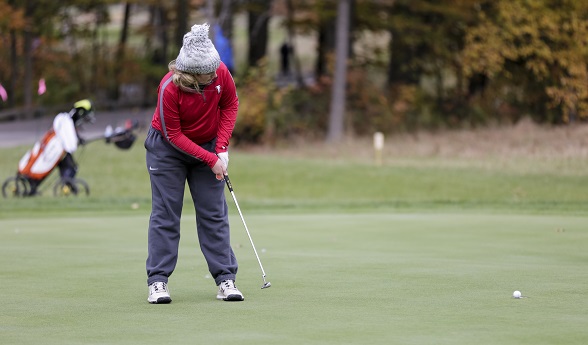 KENTWOOD – Mackenzie Keenoy walked off the golf course for the final time as a high school golfer when she competed as an individual at Saturday's MHSAA Lower Peninsula Division 1 Final.

The East Kentwood senior standout didn’t play as well as she had envisioned. However, the 17-year-old had no regrets about her last tournament that was played amid less-than-ideal conditions at The Meadows at Grand Valley State University.

“The wind was crazy on the first day and it was cold, and it started snowing for most of the second day,” Keenoy said. “The wind never stopped blowing, and my ball never wanted to go on the greens. That’s how my career ended, but it’s OK. I didn’t do as well as I thought I was going to, but I’m pretty positive about it and now I’m ready for the next step.”

Keenoy struggled to a 91 in her opening round, but recovered to shoot a respectable final-round 83. Her 174 total wasn’t among the top 10, but it didn’t take away from the banner high school career she enjoyed during an incredible four-year run.

Keenoy became one of the catalysts in the resurrection of the East Kentwood program. She took part in four MHSAA Finals – three with her team.

The Falcons placed in the top 10 at the Finals three consecutive years, sparked by the talents of Keenoy and spring graduate Sarah White. As a junior last season, Keenoy carded a top-10 individual finish to help lead the team to the program’s first MHSAA Finals championship – a resounding 22-stroke victory that she will forever cherish.

“It was awesome,” Keenoy recalled. “We knew we had a good shot going in, and after the first day we didn’t even look at the scoreboard. We didn’t want to know. We went out the second day and just worked our hardest, and we knew after the front nine that we had it. It was super exciting, especially because all the seniors were graduating.”

The Falcons didn’t have a chance to defend their title this season. Keenoy was the lone senior after heavy graduation losses left the Falcons with an inexperienced and young squad.

Still, Keenoy shined as the team’s No. 1 golfer. She won six tournaments, including the Ottawa-Kent Conference Red midseason and postseason tournaments, and emerged as the top player in the Grand Rapids area.

Keenoy fired a 75 at her MHSAA Regional to qualify for the Final as an individual. 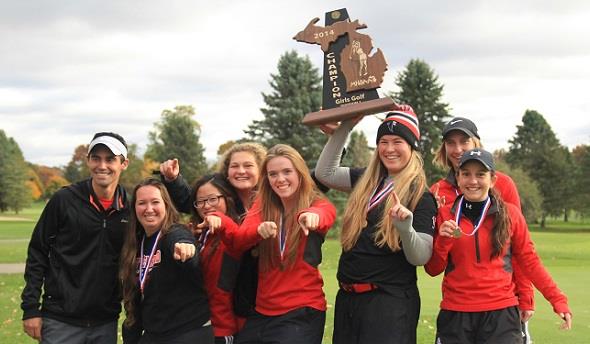 “I just wanted to do my best and be there for my team because they weren’t there,” Keenoy said. “It was different not having any of my teammates there and warming up by myself. I would’ve much rather been there with my team, but I was just happy to represent East Kentwood at the state finals this year.”

East Kentwood girls golf coach Alex Giarmo was proud of Keenoy’s ability to persevere at the Final after a rough first day.

“We’ve been through a lot together and it was cool to do it one more time with her,” Giarmo said. “We had a lot of fun, and she never got down. Crazy things can happen in golf, but there was never a time when I thought that this was going to blow up. She executed really well on Day 2, and could’ve shot really low if not for a couple bad bounces.”

Overall this fall, Keenoy owned a scoring average of 78.1 for 18 holes and 36 strokes for nine.

“I won every tournament I played except for Regionals and the Finals, so I met every single goal,” Keenoy said. “I went out there and played for my team every day and worked hard at practice. With our team being so young, I wanted to be a role model for them.”

Keenoy embraced her role as a mentor to her younger teammates. She preached to them about work ethic and what it would take to achieve their individual goals.

“I loved it,” she said. “They didn’t know what to expect, so I tried to help them as much as I could. I told them, ‘This is what you have to do, you have to work hard to get where you want to be.’ I showed them how hard I worked the past three years, and this is where it got me. 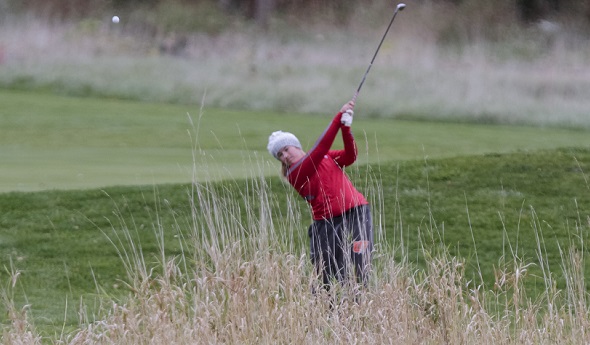 “They all want to be great players, and I’m excited to see what the future holds for them next year.”

Giarmo said Keenoy’s experience and tutelage were important contributors to the team’s growth.

“She was a big help, and when you have a senior leader that has been through that many battles, it really helps your team look more mature,” he said. “It was a tight-knit team, and she did a great job leading them through moments of uncertainty.  She had a phenomenal year, and she really embraced that No. 1 role. It was nice to see her get wins, and she was very reliable. That’s what you want in your No. 1 golfer.”

Keenoy, whose best attribute is her putting, is taking her talents to college. She recently committed to the University of Findlay in Ohio.

Keenoy chose the Oilers, who competed in the Division II National Tournament in the spring, after also considering Wayne State and Southern Illinois-Edwardsville.

“I’m really happy that I made that decision, and I liked the atmosphere of the whole place,” said Keenoy, who’s already been accepted into the nursing program. “It’s very much like Grand Rapids, and it’s the kind of place that I was looking for to go. It was the perfect fit for me, and I’m really excited.”

With her high school career finished, Keenoy is eager to reach her potential in the upcoming years.

“I’m looking forward to the future,” she said. “I worked my butt off to get here and that hard work has paid off. I’m excited now to transition from being a Falcon to an Oiler.”

PHOTOS: (Top) Mackenzie Keenoy putts during Saturday’s second round of the MHSAA Lower Peninsula Division 1 Final. (Middle) Keenoy, hoisting the trophy, poses with her teammates and coaches after last season’s championship win. (Below) Keenoy drives a shot at The Meadows at GVSU. (Click for more from HighSchoolSportsScene.com.)