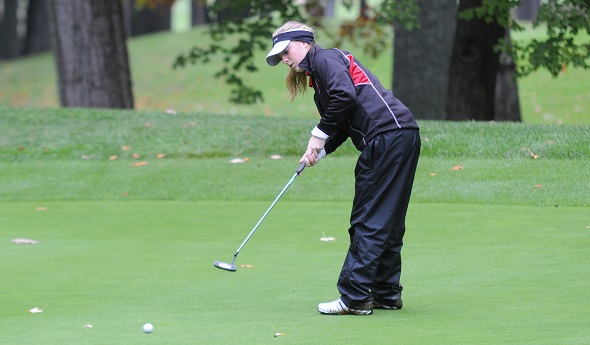 BATTLE CREEK – Margaret Esordi says she likes to play golf in the rain, and she proved it Saturday in the MHSAA Division 4 girls golf championship meet at Bedford Valley Golf Course.

Esordi, a sophomore who has been the No. 5 player for Grosse Ile, battled the cold and rain for a 38 on her first nine holes and finished with a team-best 85 to lead the Red Devils to their second MHSAA championship in three years.

“I was in shock when I came in,” said Esordi, who shot 94 on Friday. “I was just really focused, and I wasn’t thinking too much. I was just focused on helping my teammates, especially the seniors. I wanted to make it special for them.

“I like to play in the rain, and we knew the challenges that we faced, and we all stuck together and focused.”

Grosse Ile coach Jim Bennett was thrilled with the play of Esordi.

“She’s been No. 5 all year, and she came to life and just had a great front nine,” he said. “She just hit everything solid and started making putts.”

Senior Emily Bargardi confirmed just how special it was to win another title.

“It feels amazing,” she said. “We were state champions my sophomore year, so to have the feeling again is incredible. Since I was a sophomore then, I really didn’t know what really was going on, but being a senior makes it that much better.”

Bargardi’s two-day total of 171 led Grosse Ile, but she slipped to an 88 on Saturday after an opening 83 on Friday.

“I normally don’t play that good in bad conditions,” she said. “It was really tough for me because I was really nervous because of my previous times in the cold and rain – they haven’t been so good.

Bargardi said she was re-energized when she found out how well Esordi was playing.

“Oh my gosh, I think that almost made me play better because it made me so happy,” Bargardi said. “I was so proud of her.

Grosse Ile had a balanced team, and all five players finished among the top four for the team on either Friday or Saturday. In addition to Bargardi and Esordi, Katherine Kuzmiak had 88-92-180, Megan Moco had 91-96-187 and Katie Williams had 101-95-196.

“We’ve been bunched together all year,” Bennett said. “We don’t have that No. 1 player that goes out and shoots a great score, but all the girls pick up each other.” 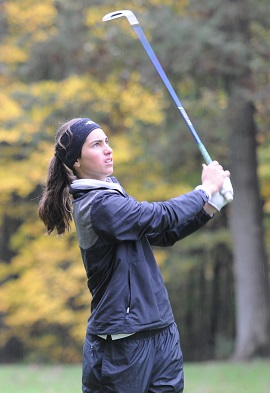 The second-place finish by just two strokes was tough to take for Grand Rapids NorthPointe Christian.

“Our girls are hurting al little bit right now from looking at themselves, but you can’t do that,” coach Tom Koert said. “I’ve even had to take a second and say, ‘Wait a minute. We all tried our hardest.’ Not one girl gave up one minute, and that’s the proudest you can be of a team. If they all give every minute out there, you can’t dip your head.

“We’ll fix ourselves from this, but right now it’s hard for them and me. I’m so proud of what they did.”

Grand Rapids NorthPointe Christian did have the most inspirational player in sophomore Jessica Zystra, who was honored at the end of the tournament for her courage to play golf after having scoliosis.

Zystra had surgery to put two metal rods in her back and she has 10 fused vertebrae, but she walked all 36 holes and finished with 104-99-195.

“The hardest part was before the surgery, deciding whether to have it or not because I was afraid I wouldn’t be able to do any activities like sports anymore,” Zystra said. “It’s been great the last couple of years. I’ve recovered very well, and it’s just been great.”

When asked if she could have imagined this day a few years ago, Zystra could not have given a better answer.

“Anything can happen, and today’s just a great day,” she said.

Monica Koert led Grand Rapids NorthPointe Christian with 84-75-159, and third-place Flint Powers Catholic had Kristen Wolfe and Morgan Zloto each with 168 as the team finished six strokes behind Grosse Ile.

Three-time defending champion Lansing Catholic finished fourth and had the individual champion in senior Jacqueline Setas, who had a 150 total to win by nine strokes over Koert, who finished second. Setas had 77 on Friday and 73 on Saturday and seemed more pleased with the showing of her team, which lost four of its top five players from a year ago.

“I think everyone really didn’t think our team could be in the top five this year, so I think we made a bold statement,” said Setas, who plans to play golf at Michigan State University. “Just to make top four is an accomplishment.”

Lansing Catholic shot 359 on Saturday for its lowest 18-hole score all season.

“I’m feeling pretty good but a little sad for the seniors who are leaving,” coach Mary Schafer said. “It’s been a very special time.”