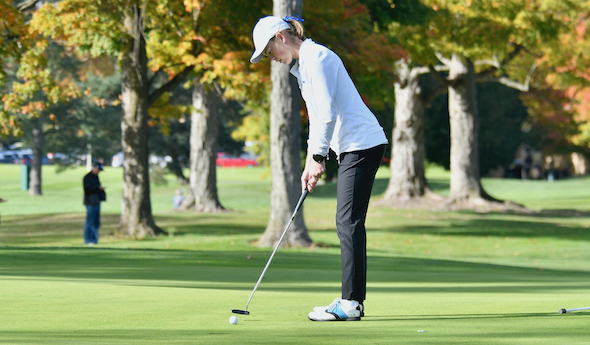 GRAND RAPIDS – Lilia Henkel admitted to struggling a bit with her golf game during the months leading up to this high school girls golf season.

You wouldn’t have guessed it after the Forest Hills Northern senior sent a buzz through the statewide golf community with a record-setting performance in her season debut.

“It was a mediocre summer, and the past few tournaments before then I didn’t play that well,” Henkel said. “I played some of my worst golf, and I just wasn’t hitting the ball where I needed to. I was frustrated and confused about what was happening.”

Henkel overcame the issues she was encountering in the first event of a fall season that was in jeopardy due to the current Covid-19 pandemic.

Golf, tennis and cross country were the first sports cleared to play after five months, and the three-time all-state selection took advantage of the opportunity.

“It was obviously the first event for any high school sport and everything just set up perfectly,” said Henkel, who made the all-state Super Team last season. “The weather was beautiful, the course was awesome and it was good to be back with the team. With everything that has been going on, we all just wanted to go out and have fun and make it as memorable as possible.”

Henkel has enjoyed her share of high school golf highlights; she individually tied for second at the 2019 Lower Peninsula Division 2 Final, tied for third in 2018 and was seventh as a freshman.

But her round at Stonegate certainly made for another memorable moment.

She set a course record, besting the previous low round of 66, set by former Miss Golf and two-time MHSAA Finals champion Laura Kueny.

“The pro at Stonegate couldn’t believe it, and he gave her a certificate,” Forest Hills Northern coach Kent Graves said. “That’s a difficult course. We’ve been going out there to play for a number of years and it’s not an easy course by any means, but she was just all over it that day.”

Henkel’s first nine holes included three birdies and three eagles, as she shot a stunning 8-under-par 28 entering the back nine.

She rolled in a 25-foot eagle putt on No. 5, and then followed with a 20-foot chip-in from just off the green on No. 6. She chipped in for an unexpected eagle yet again on No. 9.

“That was one of my favorite holes,” Henkel said. “It was a short par 4 and I drove it to the side of a greenside bunker. I didn’t realize how fast and downhill that green was, and I duffed my chip. I hit ground first, and it landed just five feet on the green. I thought it was going to be short, but it kept going and went in.”

Henkel made four more birdies on the back nine for a 32. Her final score bested her previous low round by seven strokes; however, she wasn’t completely satisfied after the round.

“If I didn’t leave anything out there I would’ve been like, ‘Wow, I just shot a really good score,’ but I honestly felt like at the very least I left three (shots) out there, if not four or five, because I had two three-putts and then I remember a 6-foot birdie putt that I missed.”

Graves, who has guided the Huskies to three straight wins at the MHSAA Division 2 Finals, also believed Henkel could’ve gone even lower.

“I hate to say this, but I looked at her card and saw 60 and I was disappointed,” Graves said. “She had 28 (on the front nine) so I was hoping for sub-60. That is the silliest thing in the world to say in retrospect, but what a great round. It was just one of those days when everything came together.”

Henkel admitted to having aspirations of bettering her score as well.

“On the 11th tee box I said to myself and to the girls I was playing with that I was going to shoot 59,” she said. “That was my goal. There wasn’t a sliver of doubt in my mind that I couldn’t go and do it. I was having fun, it was an awesome day, so I thought, ‘Let’s go do this.’”

Led by Henkel and senior Anna Fay, a two-time all-stater, the Huskies have since won two more tournaments – the Kent County Classic and Forest Hills Central Invitational. Henkel shot under par at both.

Henkel likes this year’s veteran group as she and her teammate pursue a rare fourth Finals win in a row. The Mona Shores teams from 2009-12, with four straight titles, are the only Lower Peninsula girls golf teams to win more than three straight Finals championships.

“If we could get the four-peat it would be a cherry on the top, mic drop, I’m out,” Henkel said. “I’m really looking forward to the rest of the season, and the other girls have been shooting great scores so far. I see the potential in this team, and we’ve been working hard in practice. It’s been really nice.”

Graves believes this year’s team can contend for another Division 2 title.

“You certainly give yourself a chance anytime you have players like Lilia and Anna on the team,” he said. “Everyone has a great one and two, but it’s that three, four and five (player) that really wins championships. And I think we’re really solid in those positions this year.”