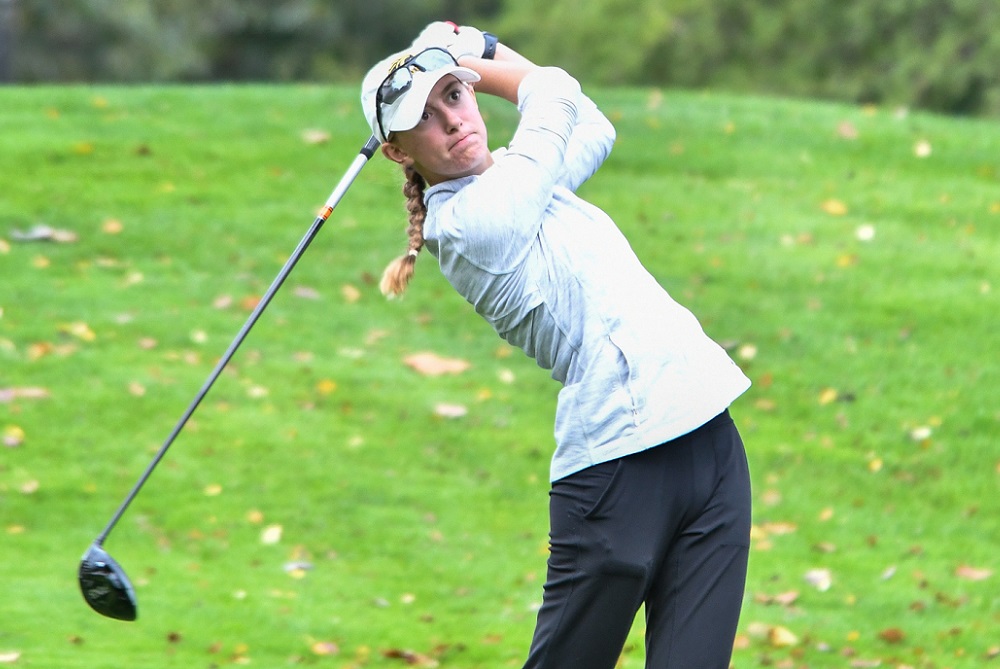 Last season saw some of finest performances in MHSAA Lower Peninsula Girls Golf Finals history. And with a number of standouts returning this weekend, we’re looking forward to the encore.

Macomb Lutheran North’s Lauren Timpf is a returning individual champion after her 139 last season was the second-lowest score in LPD3 Finals history and tied for third-lowest for any Class or Division, with her opening round 66 setting an all-Class/Division record. Ann Arbor Greenhills’ Mia Melendez set the LPD4 Finals record with a title-clinching 143 – and she’s back as just a sophomore.

South Lyon senior Gabriella Tapp is pursuing her third individual title after shooting a 144 in 2021 to tie for the fourth-lowest 36-hole score at an LPD2 Finals. Portage Northern’s KT Leinwand posted the 10th-lowest for that division all-time in finishing second at 148.

Meanwhile on the team side, Northville is in pursuit of a fifth-straight LPD1 championship – and coming off a two-day 615 last year that was the second-lowest in all-Class/Division Finals history.

Play both days this weekend begins at 10 a.m. See below for a number of teams and individuals who could be in contention, and check out the MHSAA Website for full lineups and more.

Rankings are by iWanamaker based on teams' 18-hole rounds through Regionals.

This is a loaded top three. Northville has won the last four LP Division 1 championships and claimed the Kensington Lakes Activities Association Tournament title last week. Brighton defeated Northville earlier this season in match play to eventually end up the champion of the KLAA West. And Adams is just a few weeks removed from winning its first Oakland County championship. Brighton was fourth and Adams seventh last season, and Rockford is aiming to be another serious contender ranked No. 4 after finishing eighth a year ago.

Northville: Seniors Samantha Coleman and Avi Gill are the only returnees from last year’s Finals top five, but both bring plenty of high-level experience to this weekend. Coleman just missed placing among the top 10 individuals last year after tying for sixth as a sophomore and scoring for the Mustangs at the 2019 Final, while Gil tied for 14th in 2020. Northville won last week’s Regional at Washtenaw Golf Course by 36 strokes, shooting a 324, with senior Ally Zuidema finishing first individually, Coleman second and junior Meera Sankar tying for sixth.

Brighton: The Bulldogs have ascended from not qualifying as a team in 2019 to tying for sixth in 2020 and finishing fourth last fall. All five of last season’s starters are back this weekend, and junior Abbie Pietila missed placing in the top 10 last year by three strokes. Brighton shot a 310 at El Dorado in Mason to win last week’s Regional by 28 strokes, with senior Amelia Gatti third, junior Lauren Forcier tied for fourth, junior Madison Martens sixth and Pietila seventh. The Bulldogs are seeking their first Finals championship, having finished LPD1 runner-up in 2017.

Rochester Adams: The Highlanders also are seeking their first Finals championship, having finished runners-up in 1999 and 2020. Adams was seventh last season with just one senior in the lineup, and junior Laura Liu is back after tying for fourth individually last year and just missing the top 10 as a freshman. Senior Grace Wang also returns after tying for ninth individually in 2020. Adams won its Regional at Metamora Country Club with a 315, 17 strokes lower than No. 5 Rochester High. Junior Katie Fodale tied for individual runner-up, with Wang fifth and Liu sixth.

More individuals of note: Grand Blanc senior Kate Brody has been one of the state’s most dominant golfers during her four seasons, winning the LPD1 individual championship in 2020, tying for fourth last year placing third as a freshman. Troy Athens senior Olivia Hemmila also has been driving toward a high finish after tying for ninth last year and qualifying for the Finals her first two seasons as well. They and Liu are the only top-10 returnees from 2021, although Troy senior Riley Hayden was 11th and should contend again. Brody shot a 65 to win the El Dorado Regional, and Hemmila won at Stoney Creek Metropark last week. Also claiming Regional titles were Rockford junior Jessica Jolly – with a 64 at The Meadows at Grand Valley State – Farmington junior Venetia Chap and Rochester sophomore Madison Yang.

South Lyon won its first championship in 2020, after finishing runner-up in 2019, and the Lions placed third last season. Mercy is seeking its first top-two Finals finish since placing runner-up in LPD1 in 2012; the Marlins won LPD1 titles in 1999 and 2001. Byron Center is seeking its first championship but coming off its highest Finals finish, runner-up last year to a first-time champion in Dearborn Divine Child. South Lyon shot a 321 to edge Mercy by seven strokes and win last week’s Regional at Farmington Hills Golf Club.

South Lyon: Senior Gabriella Tapp is finishing up another of the most illustrious careers in MHSAA history, seeking to add a third championship to her Finals titles in 2019 and 2021 and tie for sixth place in 2020. Senior Ellen Albert joined her in last season’s lineup, and sophomore Kaylyn Wisniewski tied Tapp – and then defeated her in the tie-breaker – to win the medalist honor at last week’s Regional, where Albert placed fourth.

Farmington Hills Mercy: The Marlins finished fourth at last season’s Final with six players figuring into the lineup – and none a senior. Five of those six are slated to play this weekend, and all five placed among the top 15 at the aforementioned Regional at Farmington Hills GC. Sophomore Maeve Casey was third, junior Abbey Slankster fifth, sophomore Lisa Polakowski sixth and senior Chloe Vig seventh. Vig was the team’s low scorer at last season’s Final and also scored for the team that finished fourth when she was a freshman in 2019.

Byron Center: The Bulldogs also made their run at the championship last season with a younger group, graduating only one from the five that finished nine strokes back. Junior Macie Elzinga finished third individually last season, and she was the Regional runner-up at Yankee Springs in Wayland last week as Byron Center won the team title by 22 strokes. Seniors Jayda Kerns (seventh) and McKenna Turnbull (tied for ninth) also placed among the top 10 at the Regional.

More individuals of note: The top four and six of the top 11 individual finishers from last season are back. Portage Northern junior KT Leinwand was runner-up in 2021, four strokes back of Tapp and four ahead of Elzinga, and Coopersville junior Lauren Davis was one of three players to tie for fourth last season. Zeeland West junior Rylee Smith tied for ninth, and Grand Rapids Forest Hills Northern senior Ashleigh Duflo was 11th and just a stroke out of ninth. Leinwand edged Elzinga by a stroke to win last week at Yankee Springs, and Davis was the Regional champion at Arrowhead in Lowell. Midland Dow freshman Sophia Lee, Dexter freshman Avery Manning and Ypsilanti Lincoln junior Madison Cowhy also won Regional titles.

Cranbrook Kingswood is the reigning champion after edging Grosse Ile by six strokes a year ago, with that title the Cranes’ first since 2001. Grosse Ile would love to similarly add to its proud history this weekend, with its most recent championship in 2011. Lutheran North also is a regular near the top, finishing sixth last season with its most recent Finals title in 2017.

Bloomfield Hills Cranbrook Kingswood: The Cranes graduated three from last season’s championship team, but junior Sienna Ilitch will be playing in her third Final and junior teammate Mackenzie Behnke also was a starter last year. Cranbrook’s 334 at Flint Elks Club last week was second at that Regional but also second-lowest among all LPD3 scores. Behnke was third, Ilitch fourth, sophomore Sophia Kouza fifth and junior Anya Samsonov tied for sixth with scores of 82, 83, 84 and 85, respectively.

Grosse Ile: The Red Devils graduated two of their top four from last season’s runner-up team, but return the third-place individual finisher and another who just missed making the top 10. Senior Lily Bargamian, junior Hanna Hargrove and senior Sydney Botten all are back and were the team’s top three scorers at last week’s Regional at Huron Meadows in Brighton. Bargamian – the third-place Finals finisher in 2021 – won last week’s Regional, with Hargrove fourth after finishing three strokes outside the Finals top 10 a year ago.

LP Division 4 at The Meadows at Grand Valley State University

Two-time reigning champion Montague just missed advancing to this year’s Finals, but Lansing Catholic is in the field after finishing second both of those seasons. Lumen Christi was third last season and is seeking its first championship since 2004. Lenawee Christian was fourth in 2021 and Kalamazoo Christian was sixth, and both are seeking their first top-two finishes.

Jackson Lumen Christi: All five starters are seniors after four started as juniors a year ago and three as sophomores in 2020. Senior Ashley Hilderley missed the top 10 at last year’s Final by a stroke, and she was the medalist at last week’s Regional at Pine Hills in Laingsburg as the Titans finished 13 strokes better than runner-up Lansing Catholic. Michaela Hauer tied for third, Alexa Spencer placed sixth and Anna McClure ninth at Pine Hills, with Hauer and McClure joining Hilderley as three-year anchors in the lineup.

Adrian Lenawee Christian: The Cougars have built from 17th in 2019 to tied for ninth in 2020 to fourth last season, when senior Lauren Swiggum also tied for fourth individually. Lenawee Christian returns all five starters from last year’s Finals lineup, and all five placed in the top 10 last week at Hills of Lenawee in a 59-stroke Regional win. Senior Morgan Bell was the runner-up, Swiggum was fourth, junior Yuki Nakamura fifth, senior Avery Sluss sixth and senior Madalyn Shaw tied for 10th.

Kalamazoo Christian: Although three seniors graduated off last year’s team, now-senior Kylie Gernaat and now-sophomore Jordyn Bonnema were the team’s low scorers at last fall’s Final. They are joined this time by another senior and two more sophomores, and that group won last week’s Regional at Moss Ridge in Ravenna by 43 strokes against a field that also included No. 4 Montague, No. 5 Kalamazoo Hackett Catholic Prep and No. 6 Grandville Calvin Christian. Gernaat was second individually, sophomore Scarlett Hindbaugh was fourth and Bonnema finished fifth.

More individuals of note: Only three of last season’s top 10 are back, and four of the top 12. But Ann Arbor Greenhills’ sophomore Mia Melendez is the reigning champion and coming off a 15-stroke Regional win at Washtenaw Golf Club. Traverse City St. Francis sophomore Grace Slocum was eighth at the Final last season, and Brooklyn Columbia Central sophomore Logan Bentley was ninth – making for some possibly intriguing Finals for the Class of 2025 over the next few seasons. Bentley and Slocum joined Melendez and Hilderley as Regional champions last week, as did Grandville Calvin Christian senior Andrea Diemer and Remus Chippewa Hills sophomore Madison Allen.