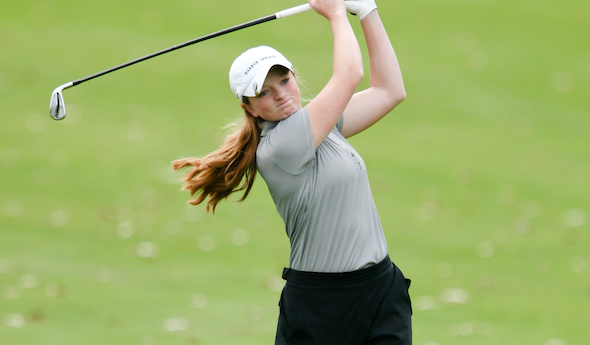 Golf etiquette dictates that golfers should always yell "fore" upon hitting a shot that carries the risk of hitting another golfer. As long as one yells "fore," the golfer did all she or he could to warn the other golfers.

Golfers also are supposed to convey this message to others in as polite a manner as possible.

“Four” though is the polite warning golfers should heed as they participate in the Division 4 golf championship at Michigan State University’s Forest Akers West on Oct. 17.

The school record-holder from Harbor Springs is not likely to exclaim “four” – but she is looking to at least claim “four” —  as in consecutive MHSAA Finals championships.

Jacque O’Neill won the individual title last fall as a junior. She’ll be looking to repeat that feat as well as help the Rams win a third team championship in four seasons after they finished Division 4 runners-up in 2019. O’Neill, now a senior, was a freshman on the 2017 Division 4 champion Harbor team and a sophomore on the 2018 championship squad.

Shouting the word “fore” once usually suffices, although it's acceptable to shout it repeatedly if the shot is sailing toward another group of golfers.

No one would blame O’Neill is she shouted four repeatedly.

But be clear. O’Neill isn’t sounding this warning. Her golfing is.

In addition to seeking a fourth straight team or individual Finals championship, she is likely to be selected to the Division 4 all-state team for a fourth-straight year. She is  coming off a third-straight Regional individual championship.

Her hopes for a team title this October lie in four as well. Harbor has a pretty good idea whom of its golfers will fill the top three scoring spots. The fourth will go to one of the newer players. The fourth may make the difference as the Regional champions seek another Finals championship.

“My goal is certainly to win another state championship, but I wouldn’t say that I feel a lot of pressure,” O’Neill said. “I’m just looking at it as another chance to show my ability, and hopefully break my new record. 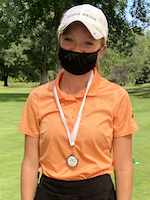 “Any nerves I feel after that usually changes to excitement, and it is one of my favorite feelings.”

O’Neill put her name in history books this fall. She shot a school-record 73 at the Cheboygan Country Club.

“She works for everything,” said her coach Pete Kelbel.  “She practices all the time.

“If she plays a round and her putting his bad, guess where she is practicing ... on the putting green.”

Kelbel is taking the Rams to their eighth-straight Finals. He’s won two titles with his record-setting senior’s older sister, Calli O’Neill. Calli, now on the golf team at Aquinas College, and Jacque have benefited from strong family support and three golf professionals, one of whom is especially closely tied.

Brian O’Neal, the girls’ father, is a golf pro. He was once named to Golf Digest’s “Best Teachers”  list in Michigan. Jacque has received guidance from another golf pro, Shaun Bezilla, Harbor Point’s head golf professional and director of instruction. And, her high school coach, Kelbel, is a golf pro at Walloon Lake Country Club.

“I want to express my extreme gratitude for being a part of such an amazing program with such great teammates,” the younger O’Neill said.  “Being on the golf team these past four years has been one of the greatest experiences of my life, and I am very excited about my next chapter. But it is very hard to say goodbye to this one.

“I have met so many amazing people, and I have such great memories,” she continued. “So thank you to everyone who has made this journey so great. I also want to thank Shaun Bezilla for helping me get my game to where it is today along with Pete Kelbel for all of his help in making me the player that I am today. As well as everyone at Boyne Highlands for their support. I would not be where I am today without the help from these people and many more.”

As she prepares for another Final, she is focused on all the family support she receives.

“Calli was one of my teammates in the past, and she has always pushed me to work harder and practice more,” Jacque noted. “She has definitely helped me fall in love with the game of golf because it is something that we love to do together.

“My dad has helped me develop my game throughout the years and pushed me to work harder,” she went on.  “My mom, Connie, is my biggest supporter and comes to all my matches. She is always encouraging me. Having a family that all loves golf certainly helps! My extended family has also always encouraged me and helped me along the way, which means the world to me.”

Harbor Springs athletic director Anna Rigby is proud of the golf program’s history. She is looking for another good result at this month’s Finals.

“I've developed an incredible sense of pride watching the program be so successful year after year,” she said. “For Jacque to consistently achieve that level of success in a sport like golf speaks volumes to her fortitude and commitment to the game.

“I'm feeling good about what we'll see from her in the Finals again this year.”

Kelbel has his own “fore” warning for everyone. Although it is really more of a fact of the matter.

“Jacque can’t get enough golf,” he said.  “She has kept growing and getting stronger throughout the year and improved her strength as swimmer.

“She’d play if you tied her up like a mummy,” he continued.  “She just deals with it and she wants to shoot a school record every time she plays.”