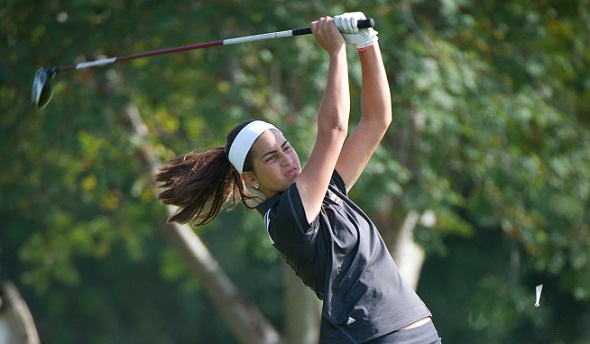 A seventh grader at the time, Jacqueline Setas followed DeWitt’s Liz Nagel through newspaper articles as the Panthers standout played her way to the 2008 Miss Golf Award.

Nagel is considered perhaps the best ever to come from the Lansing area. But the same is being said now of the Lansing Catholic junior's potential.

Setas has accomplishments to earn to match Nagel, but is off to a strong start with two Division 4 all-state selections. And this summer, Setas found herself finishing second only to Nagel in the stroke play of the Michigan Women’s Amateur – and then matching Nagel by making the semifinals of the match play.

It was a tremendous performance during an excellent summer, and further set the table for the high expectations Setas is making good on this fall.

“It’s crazy to be mentioned in the same breath as her,” Setas said of Nagel. “I feel like this summer, I was playing really well. I feel my game was up there with (the best) too.”

A Second Half High 5 recipient this week, Setas has won five tournaments this season and finished second twice as the two-time MHSAA Division 4 champion Cougars have loaded their schedule with the best from all over the state. She’s averaging 74.3 strokes for 18 holes and 35.9 for nine-hole matches, and last week fired a 68 to win the Capital Area Activities Conference White championship at Wheatfield Valley.

Setas’ most impressive win likely came at the East Lansing Invitational at Walnut Hills Country Club, where she grew up winning junior club championships. She shot a 70 to finish five strokes better than a field that included returning all-state Super Team selection Hannah Pietila of Brighton.

Setas’ runner-up finishes were nearly as impressive as her wins – she shot a 72 at Milford’s Heather Highlands Shootout to finish second to Plymouth Super Team selection Kelsey Murphy, and shot a 76 to finish two strokes behind Muskegon Catholic Central all-stater Aya Johnson at Birmingham Country Club.

Setas shot 39 or better in all seven of her team’s nine-hole matches, finishing first at all but one and shooting lows of 30 and 33.

She is one of an impressive crew of golf talents in the Lansing area this fall: Okemos’ Elle Nichols, like Murphy, also is a returning Super Team selection, and Holt’s Pader Her and Lansing Catholic teammates Dani Crilley and Janie Fineis all can go toe-to-toe with the best in the state.

“Our top three have played incredibly consistent golf, and they’ve had a great run,” Cougars coach Mary Schafer said. “It’s that mixture of athletic ability, loving the sport and wanting to get better. They can have a ton of natural athletic ability, but they don’t reach their potential because they don’t work at it hard enough. If they’re prepared, keep working at it, and work at getting better, they go from being really good to great.”

And in Schafer’s mind, that describes Setas’ progression exactly.

Setas isn’t just a golfer. She plays wing on the basketball team and centerfield in the spring. But break down her golf game, and it’s easy to understand why she’s considered a natural at her favorite sport.

She drives the ball 260 yards, about 15 more than a year ago, and with a sharp short game to match. Her course management also has improved this fall, and her mentality is just right. “Bad bounces, they don’t last long with her,” Schafer said.

But Setas sees her success as a result of something more. She played every day from May into the beginning of high school season, and in tournaments all but two weekends this summer.