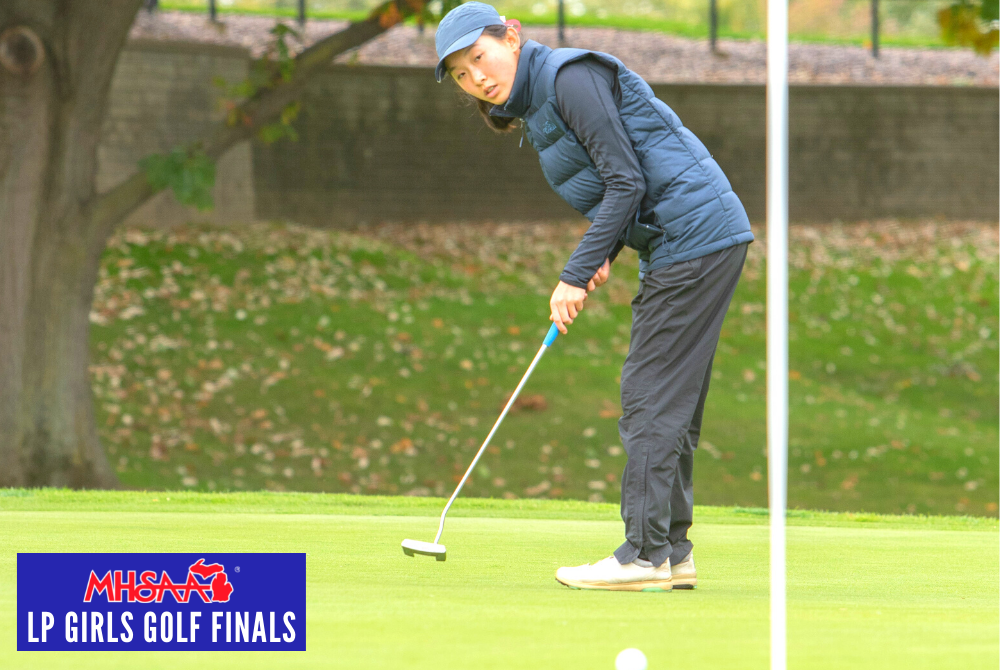 Be prepared for an encore or two, or more, at this weekend’s Lower Peninsula Girls Golf Finals.

Three 2020 team champions were top-ranked by iWanamaker heading into this postseason, and three of last season’s individual champions (plus a fourth from 2019) also will be back in the fields at The Meadows of Grand Valley State, Battle Creek’s Bedford Valley and Michigan State’s Forest Akers West and Forest Akers East.

The Finals have returned to a two-round, two-day format after COVID-19 precautions led to a one-round championship tournament a year ago. See below for a number of teams and individuals who could be in contention, and check out the MHSAA Website for full lineups and more.

LP Division 1 at The Meadows at Grand Valley State

Northville is seeking to become the eighth – and second in Lower Peninsula history – to win four straight Finals championships. But Plymouth is always in the mix, with fourth, third and second place finishes the last three seasons, and the Wildcats are seeking their first championship since claiming back-to-back titles in 2012 and 2013. Okemos was fourth in Division 1 in 2019 and third in Division 2 a year ago, and is seeking its first championship to go with a program-best runner-up run in 2013.

Northville: The Mustangs bring back plenty of championship experience. Four golfers will return from last year’s title-winning team, when all five finished among the top 19 individual placers. Junior Samantha Coleman led the way tying for sixth, and she and senior Megha Vallabhaneni tied for fourth as Northville placed second as a team at last week’s Regional at Washtenaw Golf Course.

Plymouth: The Wildcats should be carrying momentum into this weekend after finishing five strokes better than Northville to win that Washtenaw Regional. Senior Bridget Boczar brings star power to the top of the lineup after placing eighth as a freshman and tying for fourth individually both of the last two seasons. She was the individual champ last week and Plymouth’s top four at the Regional all are returnees from the 2020 Finals lineup, as senior Grace Boczar was third at Washtenaw and sophomore Brooke Morris was eighth.

Okemos: Two-time Finals champion Allison Cui has been one of the state’s best for three seasons, winning the Division 1 individual title as a sophomore and Division 2 as a junior and finishing runner-up in Division 2 as a freshman after a tie-breaker. Back in Division 1, she was second at her Regional as Okemos edged Brighton by three strokes to win at Davison Country Club. She’s one of three golfers back from last season’s Finals lineup, and freshman Alena Li followed her tying for third at the Regional.

South Lyon was runner-up in 2019 and won its first championship in 2020, and the Lions enter this weekend after tying for the second-lowest Regional score in the division. Haslett and Gull Lake both are seeking their first top-two team finishes in this sport, after coming in fourth and 11th, respectively, last season. Byron Center shot a Division 2-low 339 to win its Regional ahead of Battle Creek Lakeview and Gull Lake.

South Lyon: All three Lions back from the 2020 Finals lineup placed among the top 12 at the Regional at Groesbeck last week, with junior Gabriella Tapp the medalist. She was the Finals individual champion as a freshman and tied for sixth last season. Seniors Sophia Joseph and Logan Foust were ninth and tied for 12th, respectively, at the Regional and also return from the 2020 run.

Haslett: The Vikings finished second at Groesbeck, nine strokes back, but with three top-15 individuals – and only one senior in the starting lineup. Junior Sydney Dausman was third and sophomore Mina Yoo seventh at the Regional after both finished among the top 18 at last year’s Final, and they are two of four returning from last season’s lineup.

Richland Gull Lake: The Blue Devils will bring three seniors back to the Finals after Annie Betts and Lauryn Jerke tied for sixth and finished 10th, respectively, at the Regional at Island Hills. Betts tied for 15th at the Finals a year ago.

Two-time reigning champion Bloomfield Hills Marian also is back after finishing third (and ahead of Goodrich) at their Regional, and Lutheran North, No. 7 Flint Powers Catholic and No. 4 Grand Rapids South Christian have been in the title mix regularly over the last four seasons. Cranbrook will be playing for its second Finals title in this sport and first since 2001, while Lutheran North was the champion most recently in 2017.

Bloomfield Hills Cranbrook Kingswood: The Cranes shot a Division 3-best 324 to win their Regional at Pontiac Country Club, with all five golfers finishing among the top eight individually. Four of those five were part of the lineup that finished fourth at the Finals in 2020, where now-senior Ashley Cong tied for ninth individually. She was third at last week’s Regional, with senior Natasha Samsonov coming in second.

Macomb Lutheran North: The Mustangs were second at the Pontiac Regional behind Cranbrook paced by three finishers among the individual top 10. Sophomore Lauren Timpf shot a 74 to win the Regional after finishing third at last year’s Final, and junior Aileen Consentino tied for sixth topping a lineup with only one senior.

Bloomfield Hills Marian: Also at Pontiac, Marian finished third and will make the trip to the Finals with a nearly new lineup after graduating four from last year’s championship team. The lone returnee, senior Ashley Carroll, finished fifth at the Regional and junior Colleen Hand was fourth.

Montague posted its first top-two Finals finish last season in winning the Division 4 title by a mighty 27 strokes, and the Wildcats shot the second-lowest score among all Division 4 teams at last week’s Regionals. Chippewa Hills will be playing for its first top-two finish, while longtime power Lumen Christi will be playing for its first Finals title since winning Division 3 back-to-back in 2003 and 2004. Lansing Catholic, last season’s Finals runner-up, shot the best Division 4 Regional score last week by 23 strokes, a 331.

Montague: The three returning players from last year’s championship lineup were Montague’s top three scorers at the Regional last week at Katke in Big Rapids. Senior Orianna Bylsma was the Regional medalist and tied for fifth individually at the 2020 Final. All five Wildcats finished among the top 11 at the Regional, with senior Gabriella Moreau, sophomore Mackenzie Goudreau and senior Claire Meacham placing fourth, fifth and tied for sixth, respectively.

Remus Chippewa Hills: The Warriors are back after tying for ninth at the Final last season and finishing second to Montague last week at Katke. All four players who carded scores at the 2020 championship tournament are back, and four golfers finished among the top 12 at the Regional led by freshman Madison Allen in third and senior Kerstin Stadtfeld tied for sixth.

Jackson Lumen Christi: The Titans’ 355 last week was one stroke behind Montague’s for the third lowest at any Division 4 Regional as they finished second to Lansing Catholic at Cascades in Jackson. All five golfers finished among the top 12 including junior Ashley Hilderley in second and senior Caroline Hilderley tied for seventh. Ashley Hilderley is one of three scorers back from last year’s 13th-place Final team finisher.