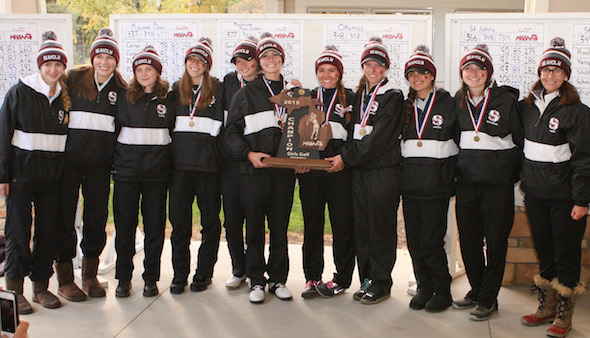 BATTLE CREEK – As the Birmingham Seaholm girls golf team gathered Saturday in the clubhouse of the Bedford Valley Golf Course, the body language of the girls suggested they might not have played well.

They were somber. They hugged. They cried. However, they actually played well enough to win their third consecutive Lower Peninsula Division 2 championship, and the emotion they were showing was the sadness of losing 11 seniors to graduation, including three who played this weekend.

“It was more sadness that it was the end of their high school careers,” said Seaholm coach Cathie Fritz, a co-coach along with Leon Braisted.

Seaholm’s fourth MHSAA championship came with a score of 664, 13 strokes ahead of runner-up Midland Dow and 28 ahead of third-place South Lyon. But it was closer than scores made it appear.

“We did not have a score in mind,” she said. “We had a goal of just beating the girls in our group, or at least staying as close to them as possible so nobody could get too far away.

“My sophomore year we came back from 17 down to win by one, so every shot seriously counts, and we just focused on the notion that everything counts.” 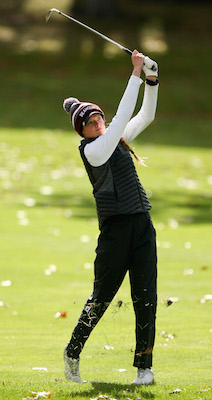 Seaholm’s second-day score of 329 was at least 11 strokes better than the rest of the field, and senior Catherine Markley led the way with a 79 after a first-day 85.

“I was just hoping to do better than yesterday, and I didn’t expect to do this well, so I’m really proud of myself,” Markley said. “This was a roller-coaster of emotion, especially at the end.

“I was so nervous to finish, but at the same time I knew it was my last hole of high school golf, so it was really emotional, but I’m really excited that it ended so well.”

Cunningham, who delivered back-to-back rounds of 82, had high praise for Markley.

“Our team really pulled it together, and Catherine Markley, she’s MVP,” Cunningham said. “She had 79 and everybody played amazing. We could not be happier with how the girls played today.”

Seaholm’s steady scoring was the ticket to the title. The eight scores used toward their total ranged between 79 and 89. In addition to the scores by Cunningham and Markley, Jordan Michalak had 80 and 79 to lead the team with a 159 total, and Hailey Roovers added rounds of 88 and 89.

Seaholm also used Cate Joelson on Friday and Emma Whittington on Saturday, but neither figured in the top-four scoring. Joelson said watching on Saturday was tougher than playing on Friday.

“You’re kind of biting your nails watching your teammates and hoping for them to do well,” she said.

Michalak’s effort was good enough to earn her a tie for third place individually, but she was left with a feeling of frustration after a triple bogey on her final hole. A par would have put her in a playoff for the individual championship.

“I had a bad last hole of high school golf, but that’s OK. I still finished great and it was enough to be top three,” she said. “I was so overwhelmed with emotion, both good and bad, and the tears were definitely flowing.

“I knew that it was close, and I was a little bit worried. But then I came in and it really didn’t matter, and everyone else was pleased with their own scores.” 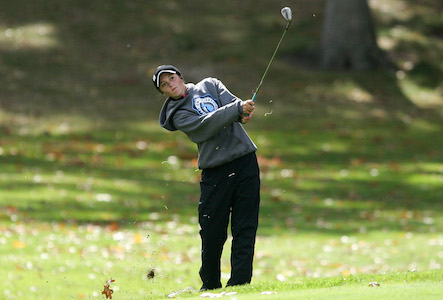 The individual MHSAA championship went to Muskegon Reeths-Puffer freshman Karina VanDuinen, who followed a first-day 82 with a 74 to edge Stephanie Carras of Midland Dow by two strokes. VanDuinen sat in the front row as the scores were put on the big board one by one.

“It was harder watching than it was playing,” she said shortly after learning that she had won the championship. “I’m trying not to cry right now, and I’m just shaking.”

VanDuinen is just 14 years old, and she has been playing golf for just three years. Her parents, Mike and Christa, knew immediately that she was gifted in golf.

“She was in the high 90s in her first week, and the second week she was in the 80s, and it went from there,” her father said.

VanDuinen won the regional with a 71 but soared to a first-day 82 at the MHSAA Final, leaving her five strokes off the pace going into the final day. It was a deficit she knew she could overcome, but she also knew it wasn’t going to be easy.

“I knew if I shot low enough there was a chance, but I didn’t think I was actually going to do it,” said VanDuinen, who had a second-day 74. “I thought I needed to shoot 72, so I didn’t think it was going to be good enough.

“My drives and putting were definitely good, though.”

VanDuinen’s parents said the difference between Friday and Saturday was simple: Putting.

“Her putts weren’t falling Friday like they did today,” her mother said.

“I actually think she hit the ball better Friday than she did today, but she made the putts today,” her father said.

VanDuinen started her second round with five pars and a birdie through the first six holes and went on from there to win. As a freshman, she has the opportunity to win four MHSAA Finals titles, but she knows that won’t be easy.

Portage Northern senior Morgan Janke-Wolff had a highlight of her own with an eagle on the par-5, 378-yard fourth hole. She chipped in from about 10 yards off the green.

PHOTOS: (Top) Birmingham Seaholm poses with its MHSAA championship trophy Saturday at Bedford Valley. (Middle) Seaholm’s Hailey Roovers follows through on an approach shot. (Below) Muskegon Reeths-Puffer freshman Karina VanDuinen unloads a shot on her way to the individual title. (Click for more from HighSchoolSportsScene.com.)