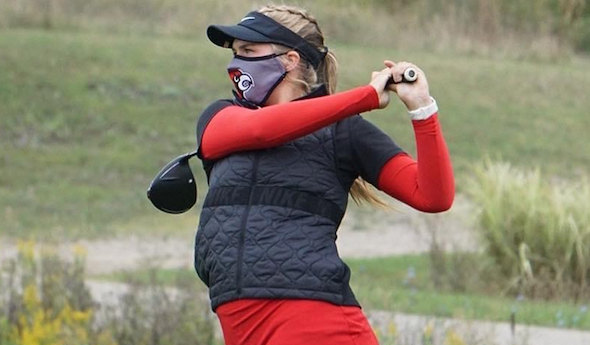 JACKSON – As a freshman at Michigan Center High School near Jackson, Kamryn Shannon was a volleyball player who decided to try golf for the first time.

“My grandpa (Bob Shannon) was the golf coach for a long time at Michigan Center,” Shannon explained. “He wanted someone in the family to pick up the game. I decided I’d give it a try.”

Her Cardinals teammates are happy she did. Now a junior and in her third season golfing, Shannon will lead the Cardinals into the Lower Peninsula Division 4 Final on Saturday at Michigan State University’s Forest Akers West. This will be the second consecutive season the Cardinals have qualified. Last year, Michigan Center finished 15th as Shannon shot a two-day total of 197.

“Our team has come a long way,” she said. “If we were to finish in the top five, I would be so happy for us. I’d like to see all of our hard work pay off.”

“It kind of came easy, but I was putting in tons of work,” she said.

Shannon lives in Vandercook Lake but started attending Michigan Center in the sixth grade. She has two older sisters, one who played basketball for the Cardinals. Besides golf, Shannon plays basketball and softball for Michigan Center.

Last basketball season, the Cardinals reached the Regional Final before the season ended due to Covid-19. She scored four points, including a 3-pointer, in Michigan Center’s 42-41 upset of Grass Lake. The Cardinals won their final 16 games of the season.

“We had a pretty good team,” she said. “We had four seniors who were really good and being recruited to play college basketball.”

Shannon said there was some concern this school year about the golf team being allowed to compete in the conference and Regional tournaments after students were sent home due to the coronavirus.

“The golf season almost ended,” she said. “Luckily, the school pulled through.” 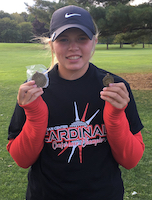 Shannon finished first at the Cascades Conference Tournament, helping Michigan Center to its first conference golf championship at Ella Sharpe course in Jackson. The team won each of the conference events by an average of 37 strokes, and all five Cardinals golfers – including also Baylee Carlisle, Elly Trefry, Sydney Cramer, and Savana Stewart – made first team all-conference. The team set several records during the outstanding season, and they were ranked throughout.

At the Regional, Shannon was medalist after shooting an 87 at the Cascades Golf Course in downtown Jackson.

She now attends school virtually every day. After school she works at The Grande Golf Club in Jackson, on the range picking up balls and cleaning carts. Working there has its advantages.

“Because I work there, I can use the range and golf for free,” she said. “I was going there a couple of times a week because we live near there and my mom said, ‘Maybe you ought to get a job there.’”

It was a good idea. Shannon said it’s helped her game.

“I’m super happy with how I’ve been doing this year,” she said. “Last year I got a lot of double bogeys and triple bogeys. This year I try to hit pars on every hole, but even if I don’t get one, I’m not mad.

“Golf can be super tough. You have to be able to think about the shot and stay calm, go up to the ball, focus on just that and swing. I’m down about 10 strokes from last year.”

She credits Steven Saari, the head golf professional at The Grande, with helping her game.

“I started taking lessons from him, and he’s helped me so much,” she said. “When Steve tells me something, I go and hit one or two buckets of balls every day until I get it down. I knew when he started teaching me that I really had to listen. There are so many little things in golf that make a big difference.”

Shannon is long off the tee – hitting drives consistently in the 240-yard range. She said she works about three days a week at the course but is there pretty much every day.

The daughter of Craig and Stephanie hopes to study golf course or sports management and play golf in college. She’s made some unofficial visits already to in-state schools.

For this weekend, she has a goal. She wants to break 80.

“I know that I am capable of it,” she said. “I did it this summer in tournament play. That’s what I want to do.”