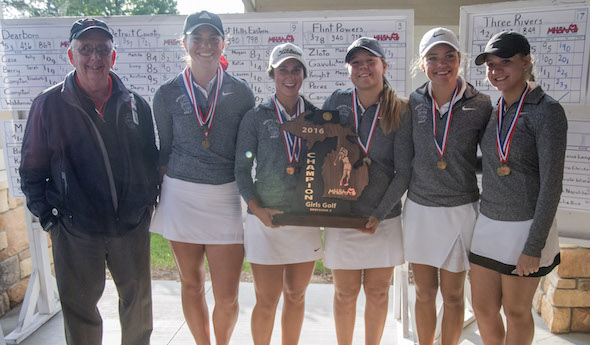 That team was Spring Lake.

Spring Lake’s winning margin was 35 strokes fewer than Pontiac Notre Dame Prep (697) but not nearly the rout of a year ago when the Lakers edged the runner-up team by 70 strokes.

It was the third consecutive title for Spring Lake, which became the first Division 3 team in MHSAA history to win three straight championships. The MHSAA Lower Peninsula tournament moved to four divisions from two classes in 1999, and prior to that, Grosse Ile won three in a row from 1996-98 in the Class B-C-D meet.

“Spring Lake has had only one other team win a state championship, and that was girls cross country, so to be a part of a team that won three consecutive state titles is something special,” said Spring Lake senior Anna Kramer, who tied for medalist honors but lost in a playoff to Pontiac Notre Dame Prep sophomore Danielle Staskowski.

“I think it was just first-day nerves,” Nelson said, “and my putting was a lot better (Saturday).”

Sophomore Hannah Klein, who had an eight-stroke improvement over the first round and finished 89-81 for a 170, echoed the feeling about first-day nerves.

“There were a lot of people watching, and I had to get used to it,” said Klein, the only sophomore on the team. “We were really focused on winning, and every shot counted. I felt like every shot had to be amazing to be able to pull out the win.” 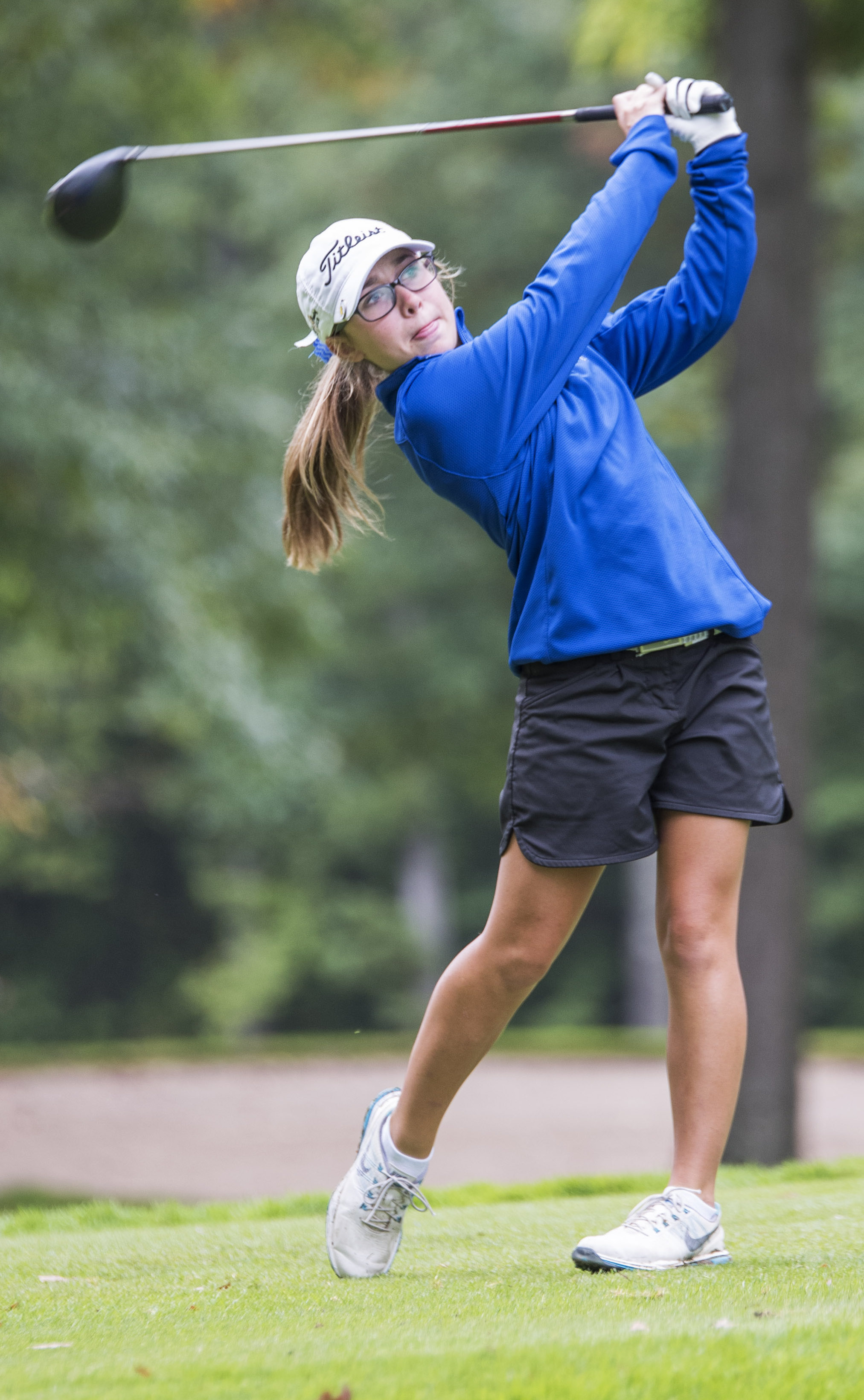 Two other seniors rounded out the five players who took the course for Spring Lake. Jackie Olszewski duplicated rounds of 87 but did it in a strange fashion. She had 39 on the first nine and 48 on the second nine the first day and then flipped them on the second day with 48 on the front and 39 on the back.

“I went through a bad streak both days,” Olszewski said. “I had five or six terrible holes, and then I had to make it up. I just told myself to forget about it and do my best because I couldn’t change what had happened.”

While Olszewski’s 87 counted the first day, it wasn’t needed the second day as fellow senior Jaedyn Shelton went from 93 on Friday to 84 on Saturday.

“I’ve worked really hard over the years to get to this point, and it feels really good,” she said. “We all didn’t have great rounds on Friday, but we all improved, and that is what we were looking to do.

“For me, there were a lot of nerves, because it was my first time at states, so I was worked up, and I think that’s how everybody felt.”

Everybody, including coach George Bitner, whose extensive background brings plenty of experience while his grandfatherly nature brings comfort and confidence.

“This is like having six daughters,” said Bitner, who has coached girls golf at Spring Lake since 1980 and also coaches boys golf. He also has coached junior high football, track & field and wrestling, and he said it all adds up to 87 seasons.

“To win a state title, you have to have the talent,” Bitner said. “The results are what I like. It shows that I am getting through to them. The girls listen better than the boys, they drink more water than the boys, and they stick together and do things together. They are an unbelievable group of girls.”

“Anna is a practice-aholic,” he said. “She will come out of the clubhouse and go to the putting green for 30 minutes, go to the chipping area and sand for 20, go up for an hour on the driving range and then go back to the clubhouse, but first she spends another 30 or 40 minutes on the putting green. That’s her routine every day, and the other girls follow it.”

Although the Lakers won their third MHSAA Finals title, the day finished on a disappointing ending for Kramer. On the first playoff hole, Kramer ran a long putt well past the hole and three-putted as Staskowski parred the hole for the individual title.

“It’s tough to three-putt in a playoff,” Kramer said. “I read the putt fine. One of my friends came up to me after and said she had that putt Friday and you can’t tell how fast it is, and it just flew by the hole.”

Staskowski, who opened with an 80 on Friday, improved to 73 on Saturday to force the playoff. She was in the same pairing as Kramer, and they were tied after 12 holes and matched each other the rest of the way to set up the playoff on the par-5 No. 16.

Staskowski, who finished fourth last year, drilled the 4-foot putt right into the hole, and she said she knew she had it the moment she hit it. She chipped just short of the green with her third shot, while Kramer was on the green but was facing a very long putt.

“I felt like I could get the chip up there and then get it to the hole so I would have an easy putt,” Staskowski said. “I hit that putt maybe 50 times on the putting green, so when I stood over it, I was like, ‘You made 50 of these. You’ve got it,’ and then I hit the putt.”

Staskowski had parred the hole Friday and birdied it Saturday prior to the playoff.

“I started my round off with four bogeys (Saturday), and then I didn’t have a single bogey coming in,” she said. “I made three birdies, and once I got to the place where I felt like I was playing well, it just didn’t go away.”