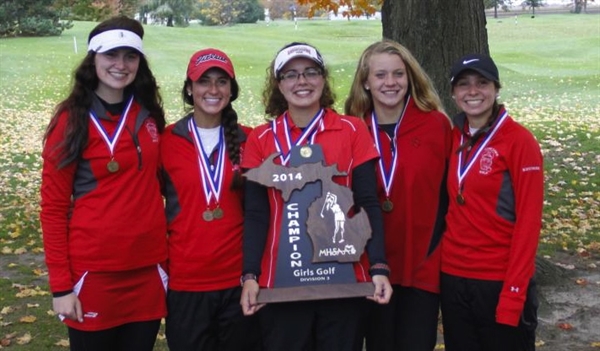 EAST LANSING – You could say that Spring Lake golf coach George Bitner was due.

Bitner, who started coaching boys golf at Spring Lake in 1968 and founded the school’s girls golf program in 1980, reached the pinnacle Saturday when his girls team rallied for the school’s first-ever golf MHSAA championship at the Lower Peninsula Division 3 Final at Forest Akers East.

“This is a different bunch,” explained Bitner, who calls himself 77 years young. “They are range rats that just want to get better. You can’t ask for much more than that.”

The Lakers delivered the old golf coach his first MHSAA title in dramatic fashion, erasing a six-stroke deficit to Bloomfield Hills Cranbrook-Kingswood after Friday’s opening round near the campus of Michigan State University.

Spring Lake sophomore Anna Kramer finished second overall with scores of 78 and 75, keying the Lakers’ Saturday charge as all five players improved their score from Friday for a surprisingly wide 18-stroke victory.

“We were behind after the first day, but not by much, so our goal was for all of us to play a little better and that’s exactly what happened,” said Kramer, who drove the ball well all day to improve on her fourth-place Finals finish last fall as a freshman.

While it was a tough day for Cranbrook, which placed second for the third consecutive year, senior Cordelia Chan capped her stellar career for the Cranes by repeating as Division 3 medalist.

Chan fired her second consecutive 75 in the cold, windy conditions to hold off Kramer by three shots. Emily Barker of Lake Odessa Lakewood placed third at 160.

“I wasn’t actually swinging very well, but the course was open enough where it kind of played to my mistakes,” Chan explained. “I worked on my game last night with my dad so that kind of helped – with my tee shots, especially.”

Freshman Kate Cao was second for Cranbrook at 172 and senior Molly Wiener third at 174.

This year, Spring Lake was the team that made the biggest adjustments between Friday’s opening round and the close of play Saturday afternoon.

All five of the Lakers’ players improved their score by at least two strokes, with the biggest moves coming in the middle of the lineup. Junior Kayla Krueger shot 87-81-168 and senior Ginnie Olszewski shot 83-79-162. Junior Emma Conroy (90-86-176) and freshman Madelyn Nelson (90-88-178) rounded out the Spring Lake scoring.

Olszewski, the only senior in the Spring Lake top five, achieved her goal of breaking 80 on Saturday despite a quadruple bogey on her final hole. It was quite an improvement from her freshman year, when she shot rounds of 117 and 116.

“We went from basically nothing in my freshman year to state champs in my senior year, so that feels really, really, really good,” Olszewski said. “It’s so cool that it wasn’t just one of us. Everyone stepped up, which is awesome for Coach Bitner.”

Bitner, who was inducted into the Michigan Interscholastic Golf Coaches Association Hall of Fame in 1996, has built his coaching philosophy around the acronym “kismif” – keep it simple, make it fun.

He believes that emphasis helped his girls relax and go out and play their most impressive team round of the season Saturday.

“I honestly wasn’t worried with the six-stroke deficit one bit,” said Bitner, who started his coaching career 50 years ago as the boys track coach at Holton High School in 1964. “The girls were so focused. They just went out and did it.”

Bitner, who gave a golf lesson to his wife, Eunice, on their first date, has had the privilege of coaching both of his children, Alyson and Andy, at Spring Lake. And just because he has now won an elusive MHSAA Finals championship, he has no plans to stop coaching.

“I don’t know what I’d do if I retired,” said Bitner, who will head with his wife next week to his winter home in North Fort Myers, Fla., where he stays until returning in early March to coach the Spring Lake boys golf team. “And besides, I have four of my top five players back and I had to leave quite a few more good players off for state.”

Spoken like a coach who is just getting started.