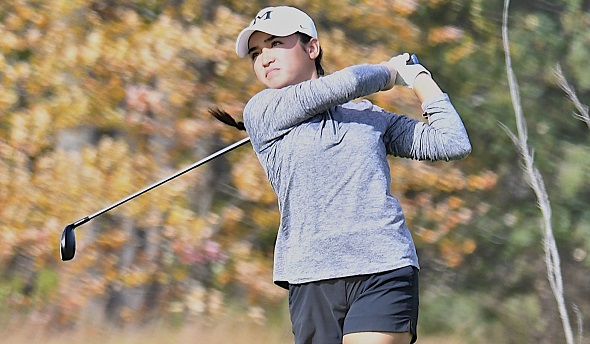 TRAVERSE CITY — Anika Dy already has cemented her legacy as one of the greatest female high school golfers in state history.

Still, she continues to add to that decorated career as she winds down her senior season at Traverse City West.

Dy, the winner of the state coaches association’s Miss Golf Award the last two years, is the two-time reigning MHSAA Lower Peninsula Division 1 medalist and has been the Titans’ top performer on two team state title runs. She caps off her last season for West this weekend at Bedford Valley Golf Course in Battle Creek when she and the Titans look to sweep the team and individual championships for the second straight year.

“I don’t think it’s quite hit me yet. It doesn’t feel like it’s ending, that’s for sure,” said Dy. ““I think I’ll be on a high of emotions. I’m going to come home and probably realize that it’s all over and start reflecting on these four years.”

What a four years it’s been, too.

Dy announced her arrival on a statewide level her freshman year when she was one of only three golfers to break 80 on the first day of action at the 2015 Lower Peninsula Division 1 Final at The Meadows at Grand Valley State. But her chance to finish first was dashed when she three-putted the last hole and closed with a two-day total of 156 — one shot behind Brighton’s Julia Dean, who came from five strokes back over the last 18 holes.

“That really, really stung,” said Dy. “I came back that next year wanting it really bad.”

Since then she’s been unbeatable on the state’s biggest stage, shooting a 143 (72-71) to redeem herself and card the low score by two strokes over Clarkston’s Meghan Deardorff at the 2016 Final at Forest Akers East. She repeated in resounding fashion last year at The Meadows course when her 141 (69-72) put her eight shots in front of Rochester’s Savannah Haque.

As satisfying as those individual victories have been, Dy has been more fulfilled by the team success the Titans have enjoyed. She calls West’s championship her freshman year her most vivid memory from the past four.

“Just because it was so unexpected,” she said of a title the Titans won over Rochester that came down to a fifth counter tiebreaker. “There is a difference for me (between individual and team success). It’s so much more fun when it’s with the team.”

Dy started playing golf at age 6 and surged to an elite level as a model of consistency and with an unequivocal work ethic.

“She has a love for the game and works very hard,” said Scott Wilson, the club pro at Bay Meadows Golf Course in Traverse City who has coached Dy for the past eight years. “She’s always been very consistent. She’s been consistent in her ball striking, and she has a great short game.”

Dy honed her game through Wilson’s junior elite program, first at Crystal Mountain and then at Bay Meadows. She’s maintained a challenging summer tournament schedule as well, taking part in a number of high-caliber events, including the Michigan Women’s Amateur, the Michigan Women’s Open and several USGA qualifiers. 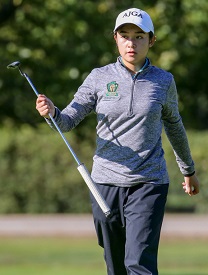 “We’ve always tried to set her up in tournaments that would be challenging to her, almost a little over her head even,” said Wilson. “She’s excelled at every level.”

Dy also has helped spur increased interest in the sport within her school as the Titans’ roster ballooned to 17 players this year on the heels of last year’s Division 1 title.

Dy has emerged as one of the leaders of that squad, along with fellow seniors Jillian Ellul, Hope Aspenleiter and Evelyn Krueger.

“This year it’s definitely been a challenge to be that leader,” she said. “I’ve had great seniors to look up to my past three years. It was a little tricky at first because we doubled the size of our team from last year. There were a lot more new girls who needed a lot of direction, but it’s been fun getting to know them and watching them grow into better players.”

Those new responsibilities haven’t had a negative affect on Dy’s game. She’s been regularly shooting in the upper 60s and near 70 and has finished as the medalist at every meet this season except one — when her younger sister Anci, a sophomore, beat her at an invitational in Alpena. Anci Dy, a tremendous golfer in her own right, was the Regional runner-up last week after finishing seven strokes behind her sister.

“It’s going to be our last high school tournament together, and I really want all of us to succeed,” Anci said. “I’m really excited to play on the team with her one last time.”

Next year Anika Dy will head to the University of Michigan for the next stage of her playing career.

“She’s going to a great school,” said Gagnon. “The coaches at Michigan are excited to have her. She’s going to be an asset for them from the very beginning. It’s a progression. She’s accomplished everything she’s going to accomplish in high school. It’s time to see what she can do at a different level.”

As for where golf could take Dy into the future, Wilson said the sky is the limit for his star pupil.

“She’s going to continue to try and put her skills to the test and see where it goes from there,” said Wilson. “It’s all up to her how far she wants to take it.”