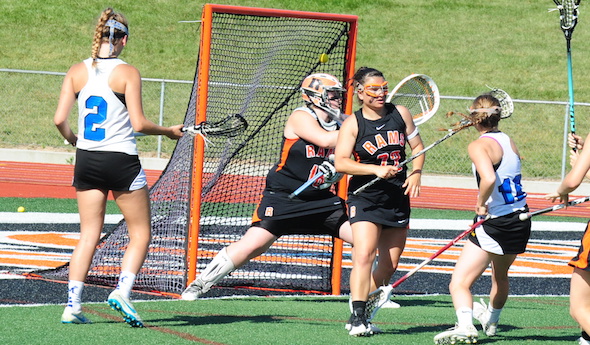 ROCKFORD – Lacrosse often is not a goalie’s game – and especially not when the player defending the net must stop the speedy lime-sized ball flying at her multiple times from point-blank range.

But her teammates were correct Saturday in giving Rockford goalie Katie Elwell the game ball after the top-ranked Rams’ 10-9 win over Bloomfield Hills Marian in the MHSAA Division 1 Final.

After opening up a comfortable 8-1 lead during the first half, Rockford found the net only two more times during the final 33 minutes.

Elwell – who signed as part of the first recruiting class for the new program at Central Michigan University – stopped 11 shots total and allowed only two goals over the final 20 minutes to help the Rams secure their third straight MHSAA championship.

“I don’t credit myself. Everyone stepped up at one point to help us, and especially at the end. We couldn’t have done it without every single girl on that field,” Elwell said.

“It’s hard for me to focus sometimes (while also directing the defense), and I knew I just had to focus in the moment and focus on that ball so that I could make that stop to help my team.” 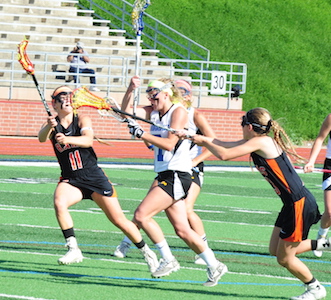 Rockford is 59-14-1 over its three championship seasons, its best single-season finish of the run this spring at 21-3. Its only losses this spring were twice to Division 2 champion East Grand Rapids and Arrowhead, the top-ranked team in Wisconsin.

The Rams had gotten a look at Marian already this season as well, defeating the second-ranked Mustangs 14-7 at the end of April.

But the Marian looked like two teams over the course of Saturday’s Final.

The Mustangs took a more aggressive attack to Rockford during the second-half run, which included multiple goals by senior Caroline Forester and sophomore Claire Kelly.

Marian turned up the pressure one last time during the final two minutes, but two key plays by freshman Brooklyn Neumen and a clutch save made the final score stand.

Neumen first caused a turnover on her team’s side of the field. Marian senior Olivia Hargrave-Thomas stole the ball at 1:24 to regain possession for her team. Elwell turned away what could’ve been the game-tying shot by Forester with only 55 seconds to play. With 36 seconds left, Neumen won a jumpball to the front right of the Rockford goal and sprinted downfield to run off most of the remaining time before her teammates took care of the rest.

Junior Grace Gunneson and senior Alexandra Vandermolen both scored three goals for Rockford, and Vandermolen also had an assist. She scored the Rams’ final goal four minutes into the second half to give them a 10-7 edge.

Senior Hannah Lievois also was up to the championship task in net, making eight saves for Marian. The Mustangs were making their second appearance in an MHSAA Final and also finished runner-up in 2009. They finished this spring 21-4.

“Once you get down by six or seven goals, against a good team, it’s very hard to make it close. We made a game of it, right to the end,” Marian coach Jamie Francek said.

“I would love to play them again, if we could,” he added. “If it wasn’t for that little period of time in the first half where they got up on us, I think we were the better team most of the game.”