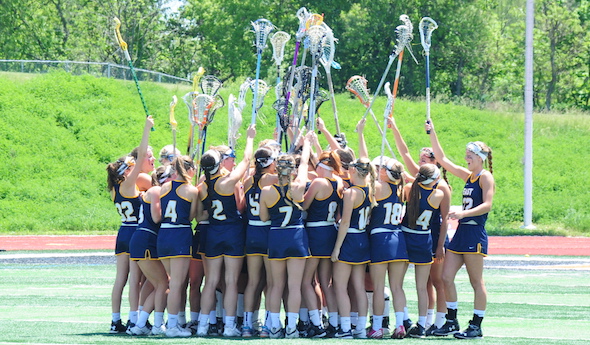 ROCKFORD – “Dynasty” is too easily thrown around in describing sports teams.

But East Grand Rapids’ girls lacrosse program has earned that level of distinction with its success over the last four seasons.

In doing so, East Grand Rapids also made it four seasons without losing to a Michigan team, a streak that began with the first game of 2012. The Pioneers finished this spring 24-1, losing only to the team from Medina, Ohio, while picking up wins as well on the road at Illinois powers Hinsdale Central and Wilmette Loyola Academy.

“It was a goal of ours to send a message throughout the state, and the country. And we went out and played Illinois teams, and succeeded,” said Pioneers senior Liza Elder, who finished her final season as one of the top single-season and career scorers in MHSAA history. “We had a lot of girls playing together for a long time, and I just think we were great leaders to the underclassmen and really bonded this year.”

Total, the Pioneers are 92-5 over the last four seasons – with seniors Elder, Jane Goodspeed, Emily French and Elle O’Connell part of the lineup for the entirety. 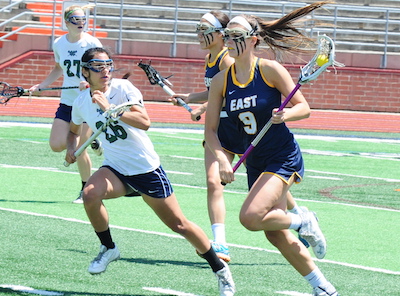 “Two years ago, the class of 2013 has a similar run. They took a little longer to jell, but this senior class had those upperclassmen to bring them along,” East Grand Rapids coach Rich Axtell said. “This class is clearly our best class, the best team we’ve ever put on the field. They set a really high bar for the underclassmen, and the underclassmen know it.”

A total of 12 seniors also played roles on the 2014 championship team before helping the Pioneers take another step toward an unprecedented run. No other team has won four straight titles in MHSAA girls lacrosse history; two other teams won three straight.

Only three opponents this season scored in double figures on East Grand Rapids, which beat reigning Division 1 champion Rockford twice among its most notable instate wins.

“If a team beat us, they could claim that for years and years,” Pioneers sophomore Lindsay Duca said. “Our coach emphasizes that we can’t have a bad day. We can’t let one thing upset us; if one person is playing badly, the whole team has to pick each other up.

“(The Medina loss) was a couple weeks ago, and we came right back at it, really motivated.”

Cranbrook Kingswood scored first Saturday, only 45 seconds in on a shot by senior Maddy Weber. The score was knotted 2-2 after 10 minutes before Duca scored the second of her five goals to start a 5-0 run. Elder had two of her seven goals during another five-goal run during the second half.

Elder finished this season with 119 goals, second most in one season since lacrosse became an MHSAA-sponsored sport in 2005. Duca also had five assists Saturday.

The Cranes eliminated three top-10 teams during the tournament, and their other three losses this season were all by only one goal apiece.

Freshman Isabelle Scane had three of the team’s six goals and an assist, and Weber – one of six seniors – scored twice.

“I said (to my team after), someday we’ll be holding up the other trophy, and when we do that, it will be dedicated to the seniors,” Courter said. “This is our first year together, and we give them all the credit for us making to the state final for the first time ever.”