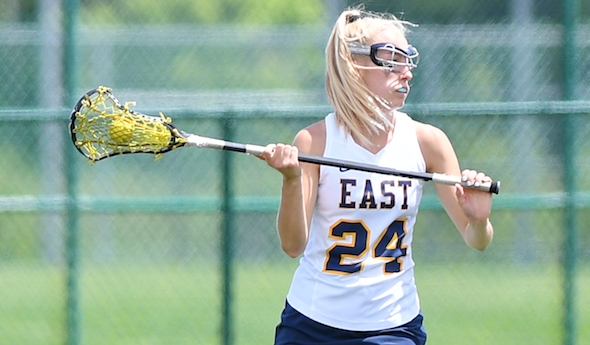 The Pioneers’ senior attack had seven goals and three assists as East Grand Rapids regained the Division 2 championship Saturday with 22-7 win over Bloomfield Hills Marian, earning Whiteside the MHSAA “Performance of the Week.” She finished this spring with 149 goals – second-most for one season in MHSAA history – and a record 208 points despite playing in what’s considered the toughest league in the state.

Whiteside was a freshman on EGR’s 2016 championship team and helped the Pioneers finish Division 2 runner-up in 2017 and reach the Semifinals a year ago. She also had 59 assists, 107 draw controls and 31 ground balls this season and finished her career with 409 goals and 114 assists for 523 points – her goals and points rank second all-time, and her assists are seventh most for a career. East Grand Rapids finished this season 24-2 and tied for the Ottawa-Kent Conference Tier 1 title with Rockford, the eventual MHSAA Division 1 champion for the seventh straight season.

This was a celebration-filled school year for Whiteside, who also helped the EGR cross country team to the Lower Peninsula Division 2 title in the fall with a 21st-place finish at Michigan International Speedway. She was named this winter as one of 32 MHSAA/Farm Bureau Scholar-Athlete Award winners and graduated with a 3.9 GPA to go with her athletic and other extracurricular successes. It’s difficult to talk about Whiteside without also discussing four-year varsity teammate and close friend Mary Schumar – Whiteside’s business partner as well as they direct a summer lacrosse training academy for younger players. Schumar is heading next to an established power in Marquette University, while Whiteside will continue her career at Central Michigan University for a program that just completed its fourth season – she picked the Chippewas in part for a chance to play a major role in that program’s ascension. Whiteside is considering studying to become a nutritionist or go into personal training and fitness, and she’s also interested in business and marketing.

Coach Rich Axtell said: “Audrey has since her freshman year been a leader by example on this team. She never takes a day, a drill or a play off. She goes hard all the time. She has won virtually all of the sprints and conditioning exercises that we have done over the past four years. She ran cross country each fall and then attended almost every offseason conditioning session that the team held. After losing to CK in the Finals in 2017 and to Okemos in the Semifinals in 2018, Audrey, Mary Schumar and the rest of the team committed themselves to doing what it takes to win another state title. Audrey switched from midfield to attack be able to work more closely with Mary and to increase their offensive productivity. Both players had a 40-percent increase in their offensive statistics this year. Despite all this success, Audrey and Mary have remained very modest, always being genuinely surprised when I told them their statistics. When our games were in hand, they frequently passed up scoring opportunities to allow their teammates a chance to shine. Their selflessness and humility have helped to produce one of the closest and happiest teams I have ever coached. Obviously, we will miss Audrey's offensive production, but we will miss her dedication and leadership even more.”

Performance Point: “It definitely is the best way to end my senior year,” Whiteside said. “Having been to the Cross Country Finals in the fall, I think I really wanted to end my senior year right with another state championship. Our team not making it to the (Lacrosse) Finals last year, that really inspired us to work harder this season, to finally go to the Finals and hopefully win. … Our mentality going into the playoffs was to have really fast starts, because we’re usually a second-half team. We wanted to set up strong from the first draw, but I think going in with that mentality really helped us. I think we really did have a different mindset going into the state Finals … it just all came together.”

One for all: “It’s hard to describe, but (winning the title is) honestly the best feeling. We had three incoming freshmen make it this year, and I think that helped us a lot with the intensity of the team. And I think I wanted to get it for those freshmen because I know what it is like, because when I was a freshman we won. It was just honestly the best feeling and I wanted them to have that – and also all the other sophomores that made it and juniors, just everyone together.” 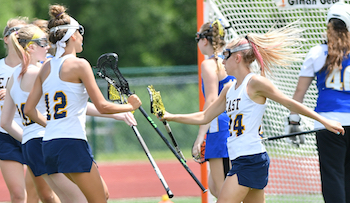 Back in business: “My friend Mary Schumar and I started a lacrosse clinic called EGR Lacrosse Academy last year. We’re trying to make it bigger this year. That’s the goal. We start in a couple weeks. I want to go into business in the future, so it’s a great experience to have to work with all the families and the kids. but I love working with kids so it makes it even better. … I’ve learned (business) takes a lot more time and work than I thought it would. And also, communicating with people is very essential to creating a great business and creating relationships. Creating bonds with people and connections is going to get you way farther than anything else – and also working harder.”

My friend Mary: “We have been friends since second grade – we went to different elementary schools but ended up being in the same friend group from middle school on to now. Playing with her freshman through senior year has been so amazing. She had a stellar freshman year – I think she got pulled up halfway and made (six) goals in the state championship game as a freshman, which is unbelievable. I got pulled up to being an attack this year with her to score more points and handle the offense with her, and that’s also been just amazing, working so well together. It just clicked this year. … We play each other (next season). Central’s first game is Marquette, and that’s going to be super surreal to play Mary next year. But we’re really excited.”

Scholar & Athlete: “I think about (being both) a lot. It’s really a motivator to work hard, and it inspires other students to work harder themselves. But also the team aspect – we have a team GPA, and I think all of us want to work harder to get that 4.0 average GPA, which I think we got a 3.7 which is amazing. Being a scholar-athlete, I know raised the bar, raised expectations on me, which I love because I love having pressure. I do better with pressure – especially in games and in the classroom.”