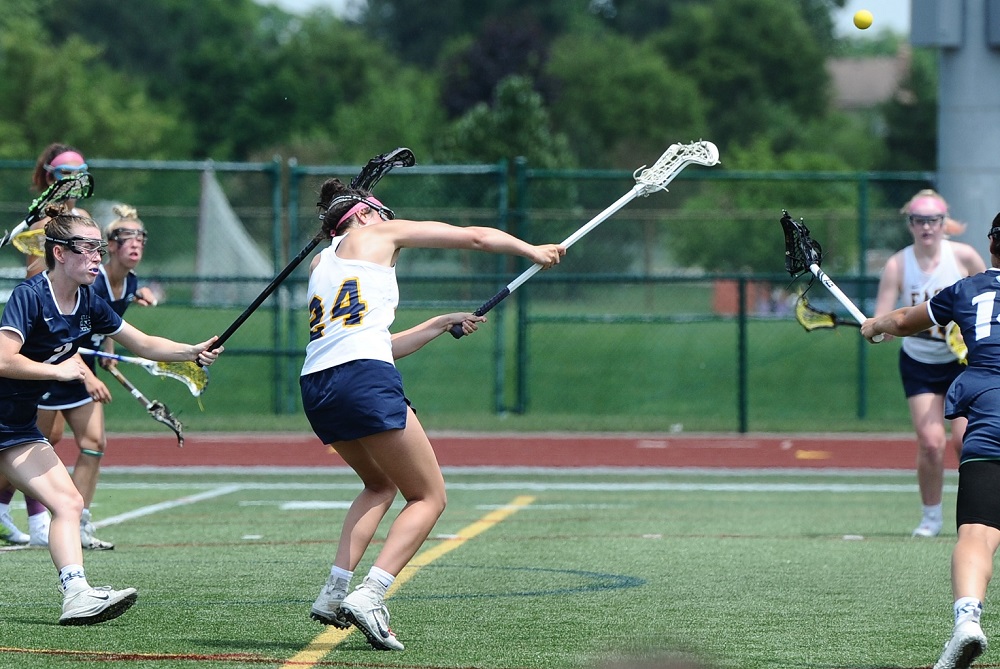 Both of Saturday’s MHSAA Girls Lacrosse Finals will be rematches of regular season games this season. Both also mix championship game regulars with teams that have earned first or first-time-in-a-long-time opportunities.

In Division 1, Brighton is that regular, making its fourth-straight championship game appearance. The Bulldogs will face Grand Rapids Forest Hills Northern/Eastern, a cooperative that didn’t exist in this form until last season. FHNE defeated Brighton 15-7 and 11-7 this spring.

In Division 2, East Grand Rapids when it steps on the field will tie Rockford for the most championship game appearances in MHSAA girls lacrosse history. Country Day, meanwhile, will be returning to the Finals for the first time since 2005. EGR won the lone meeting between the teams, 15-14.

Below is a glance at all four teams playing at Rockford High School. Statistics are through Regional Finals. Rankings are based on the Michigan Power Rating formula used to seed other MHSAA sports. The Division 1 Final is set for 2 p.m., with Division 2 following at 4:30. Tickets cost $11 and are good for both games, and may be purchased online only at GoFan.

Both games will be broadcast and available with subscription from MHSAA.tv, with free audio broadcasts on the MHSAA Network.

BRIGHTON
Record/ranking: 15-5, No. 6
League finish: Tied for first in Kensington Lakes Activities Association West
Coach: Ryan Skomial, first season (15-5)
Championship history: Division 1 champion 2011, runner-up four times.
Best wins: 14-7 over No. 4 Bloomfield Hills in Semifinal, 19-10 (Regional Semifinal) and 20-8 over No. 10 Northville, 12-11 over No. 3 Hartland, 20-5 over No. 5 Birmingham United, 19-16 over Division 2 No. 3 Grand Rapids Forest Hills Central.
Players to watch: Amanda Granader, sr. A; Gabriella Mainhardt, sr. M; Kaia Malachino, jr. M/D; Abigail Burchfield, sr. M; Ella Boose, sr. M. (Statistics not submitted.)
Outlook: Brighton will be playing in its fourth-straight Division 1 championship game with a number of experienced standouts leading the way. Granader made the all-state first team last season, Mainhardt made the second, and Boose, Burchfield and Malachino all earned honorable mentions in 2021. The Bulldogs have won seven of their last eight games with the only losses this season to Northern/Eastern twice, No. 2 Rockford by a goal, Division 2 top-ranked East Grand Rapids and Division 2 No. 2 Detroit Country Day. Brighton has given up single-digit goals in three of four postseason games.

DETROIT COUNTRY DAY
Record/ranking: 16-2, No. 2
League finish: Does not play in a conference.
Coach: Emma Kuehl, fourth season (48-5)
Championship history: Division 2 runner-up 2005.
Best wins: 18-12 over No. 5 Farmington Hills Mercy in Semifinal, 20-10 (Regional Semifinal) and 18-4 over No. 10 Bloomfield Hills Marian, 15-10 (Regional Quarterfinal) and 19-7 over No. 7 Bloomfield Hills Cranbrook Kingswood, 19-16 over Division 1 No. 6 Brighton, 21-3 over Division 1 No. 9 Haslett, 24 -8 over Division 1 No. 10 Northville, 21-6 over Division 1 No. 5 Birmingham United.
Players to watch: Hadley Keating, soph. A (70 goals, 16 assists); Olivia Winowich, fr. M (48 goals, 10 assists); Emma Arico, soph. M (45 goals, 22 assists); Ainsley Shilling, sr. M (35 goals, 19 assists); Ella Thompson, sr. M (47 goals, 14 assists).
Outlook: The Yellowjackets have returned to Finals weekend for the first time since the first season of MHSAA sponsorship of girls lacrosse. And this could be just the start of a run, with eight freshmen and sophomores among the 12 starters. Their only losses were to top-ranked teams – East Grand Rapids and Division 1 Forest Hills Northern/Eastern – and they’ve given up more than 10 goals only three times this season, in those losses and the Quarterfinal win over Mercy. Thompson and Arico made the all-state second team last season, and Keating and Shilling earned honorable mentions.