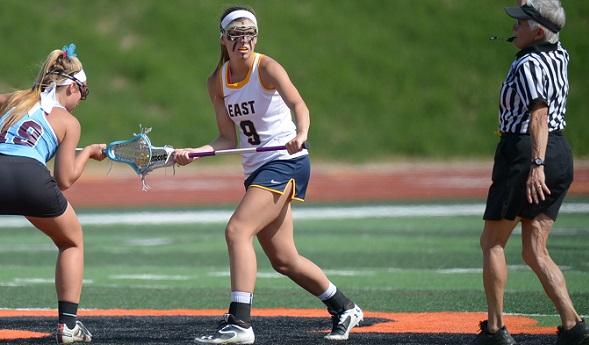 This weekend’s MHSAA Girls Lacrosse Finals at Rockford High School will match the best from east and west – and top finishers from arguably the state's two strongest conferences for the sport.

Click for more information including all results from this season's tournament. Both finals will be streamed live on MHSAA.TV and viewable with subscription, and broadcast on MHSAANetwork.com.

Here's a brief look at the four teams vying for championships (player statistics do not include Semifinals):

BLOOMFIELD HILLS MARIAN
Record/rank: 21-3, No. 2 at end of regular season
League finish: First in Detroit Catholic League Division 1
Coach: Jamie Francek, eighth season, fourth of second tenure (112-49-4)
Championship history: Division 1 runner-up 2009.
Best wins: 19-9 and 22-2 (Semifinal) over No. 9 Ann Arbor Pioneer, 14-3 and 13-10 (Regional Semifinal) over No. 4 Bloomfield Hills, 22-12 and 21-6 (Regional Quarterfinal) over No. 10 Troy, 14-9 over No. 3 Birmingham United in the Regional Final, 14-13 over Division 2 No. 2 Bloomfield Hills Cranbrook Kingswood.
Players to watch: Caroline Forester, sr. A (103 goals, 24 assists); Colleen Grombala, jr. A (69 goals, 31 assists); Sarah Peterson, jr. M (16 goals, 13 assists); Claire Fisher, jr. A (92 goals, 28 assists); Claire Kelly, soph. M (36 goals, 12 assists); Olivia Hargrave-Thomas, sr. D.
Outlook: Marian has won four league championships since Francek returned to in 2012, and this is its best run during his tenures. Cranbrook Kingswood included, the Mustangs also beat six of the top-10 ranked Division 2 teams. Forester is one of five players in MHSAA girls lacrosse history to score at least 100 goals in a season, and she made the all-state first team last season while Fisher, Hargrave-Thomas, Kelly and Peterson all earned honorable mentions. The offensive firepower is impressive, but the defense might be more so; Marian is giving up only 7.8 goals per game.

BLOOMFIELD HILLS CRANBROOK KINGSWOOD
Record/rank: 18-3, No. 2 at end of regular season
League finish: Second in Detroit Catholic League Division 1
Coach: Greg Courter, first season (18-3)
Championship history: Has not played in an MHSAA Final.
Best wins: 24-6 (Semifinal) and 19-2 over No. 10 Farmington Hills Mercy, 24-3 (Regional Final) and 19-5 over No. 8 Detroit Country Day, 16-13 (Regional Semifinal), 10-8 and 16-6 over No. 5 Bloomfield Hills Academy of the Sacred Heart, 16-10 over Division 1 No. 3 Birmingham United, 21-12 over Division 1 No. 10 Troy, 20-8 over Division 1 No. 9 Ann Arbor Pioneer.
Players to watch: Grace Giampetroni, jr. M (59 goals, 44 assists); Ari Vespa, sr. M (58 goals, 17 assists); Isabelle Scane, fr. M (81 goals 22 assists); Brigitte Ballard, fr. G (6.47 goals-against average).
Outlook: Cranbrook Kingswood broke through to the Final for the first time under the guidance of Courter, who formerly coached girls lacrosse in California and Colorado. The Cranes’ losses are impressive as well – by only one goal apiece to Division 1 No. 2 Marian and No. 4 Bloomfield Hills, and also by one in the third of four meetings with Academy of the Sacred Heart. Senior Maddy Weber (39 goals) and sophomore Danielle Augier (28) also provide scoring punch from the attack position, with Augier joining Scane and Ballard among an impressive group of underclassmen making contributions.

EAST GRAND RAPIDS
Record/rank: 23-1, No. 1 at end of regular season
League finish: First in Ottawa-Kent Conference Tier 1
Coach: Rich Axtell, sixth season (119-17)
Championship history: Division 2 champion 2014, 2013 and 2012.
Best wins: 9-5 over No. 3 Okemos in the Semifinal, 9-4, 13-6 and 19-6 (Regional Semifinal) over No. 4 Grand Rapids Catholic Central, 19-1, 18-5 and 18-3 (Regional Final) over No. 9 Caledonia, 18-5 over No. 5 Bloomfield Hills Academy of the Sacred Heart, 11-10 and 13-5 over Division 1 No. 1 Rockford.
Players to watch: Liza Elder, sr. A (111 goals 71 assists); Lexie Duca, jr. A (28 goals, 9 assists); Lindsay Duca, soph. A (46 goals, 46 assists); Elle O’Connell, sr. M (21 goals, 11 assists); Auden Bargar-Elliot, soph. M (54 goals, 6 assists); Jane Goodspeed, sr. D (1 goal).
Outlook: The Pioneers have only five losses over the last four seasons and none against Michigan teams since 2011 as they go for a fourth-straight MHSAA title. In addition to beating top-ranked Rockford twice, East Grand Rapids was 6-0 against other teams ranked among the top 10 in Division 1 at the end of the regular season. Elder’s 182 points heading into this week were the third-most all-time in MHSAA history for one season, and she has more than 300 points over the last two seasons. Goodspeed joined her on the all-state first team last season, while O’Connell and Lindsay Duca made the second team and Lexie Duca earned an honorable mention. Elder will continue her career at Northwestern University.