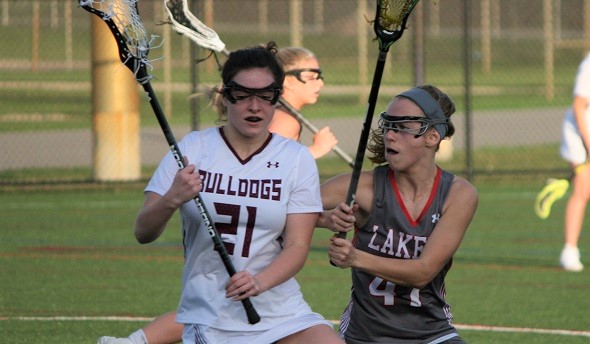 By Tom Lang
Special for Second Half

It’s not enough to recently-graduated Grandville High senior Brianna Trepins to play lacrosse well. She additionally wants to see the sport grow and prosper in west Michigan – and she knows that begins with young kids in the community.

She also knows too well, from personal experience, that coming from less financial means than most peers can keep young girls from giving the sport a try in the first place. Often, it’s as simple as the stigma of not having as nice of a stick as other players.

Trepins, who will continue her lacrosse career at Aquinas College, has helped coach youth in the community. Many times young girls are willing to try the sport but have to borrow a community center stick that’s – let’s say – not top-of-the-line equipment and well-used past its prime.

“Most of the pockets weren’t good, and the girls had to learn how to play with these sticks,” Trepins said. “When they see another girl playing with the brand new, greatest versions of these really cool sticks, that’s hard on them. I could relate. I didn’t have the best equipment growing up, so I sympathized, and I began taking sticks and restringing them – and it all went from there.”

Trepins’ discovery led to starting a business and online store last November – LaxZoo. She sells T-shirts and other lacrosse items to pay for materials to restring lacrosse sticks that people donate. She also repairs sticks of teammates and other players, and the profits from her small fees go to string material for more donated sticks – and in the short term some of the profits have gone to COVID-19 relief efforts.

“I have a ton of respect for entrepreneurs in general, because I think that takes a certain type of bravery – and the fact that she has done that at such a young age; it shows me how much she loves lacrosse and wants to incorporate it into her life moving forward,” said her Grandville coach, Alexandra Vanden Bosch. “And to do all that, she’s taking a big personal risk to start her own business. That’s so huge.”

“When I first tried lacrosse, I didn’t like it that much,” Trepins said. “I had to wear a skirt, which I thought was weird.” 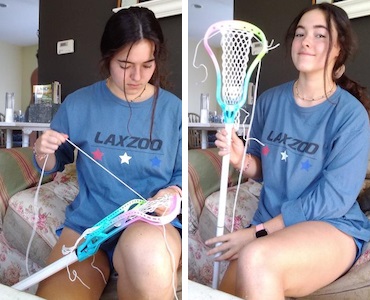 But she made some good friends and tried out again as a freshman, and made the varsity team. Before the end of the season, she became a starter on defense.

“Throughout the year my coach kept giving me some opportunities to go out on the field and show what I could do as a player, and I really didn’t have that before,” she added. “To have someone really believe in me and believe in my abilities was kind of life-changing. So, going on the field and actually feeling confident playing a sport was an amazing feeling that I never wanted to end. The program at Grandville is great, and my teammates were so supportive.”

Vanden Bosch made it clear Trepins earned it all.

“She just blossomed so quickly and got that opportunity to start on defense, and that was her natural athleticism,” the coach said. “Then when she became passionate about lacrosse because of that, she made the most improvement in between offseasons that I’ve ever seen in a player. Through that she developed leadership, and we named her as a captain her junior year. When I say hardest worker in the room, that is her.”

With the cancellation of her senior lacrosse season after all MHSAA spring sports shut down because of COVID-19, Trepins shifted gears to prepare for college, which had begun over the winter with applying for scholarships. A significant award came from the local Community Choice Credit Union’s Foundation, a $5,000 grant as part of a statewide $100,000 annual program the credit union started 11 years ago that has grown to $1.2 million in educational support for students who are focused on supporting their Michigan communities.

She plans to study pre-dental at Aquinas College – in part because she respects the work of a cousin who is a dental hygienist, but mostly because she has had her own issues growing up with teeth complications that still cause her pain in her jaw on a fairly regular basis. She is missing an adult tooth under a baby tooth that has remained in place as the family cannot afford dental insurance.

“If you looked inside my mouth, my teeth are a little weird on one side (looks concaved),” she said. “My family could never afford to fix it when I was growing up, so I want to be able to fix things like that for other people. I guess it’s quite common, and I want to help other kids when they’re growing up. There are a few options to fix it, but they are all so costly. … I just kind of have to deal with it.”

As to what Trepins has learned from starting and running a small business:

“It feels almost like a reality check at some points but also unreal in all honesty. You always see people with their businesses and think, ‘Wow, I could do that too.’ But the truth is running a business takes a lot of time and hard work for it to really start to get off the ground. But at the same time, every time you have an order that gets placed or you see someone using something that you've made – for example getting to see the little girls run around with the sticks I've strung for them – it feels a little bit unreal, and like all the work that you've put into it is actually paying off.

PHOTOS: (Top) Grandville's Brianna Trepins, left, maintains possession of the ball during a game earlier in her career; her senior season was canceled due to COVID-19. (Middle) Trepins strings and shows off a restrung lacrosse stick. (Photos courtesy of Brianna Trepins.)