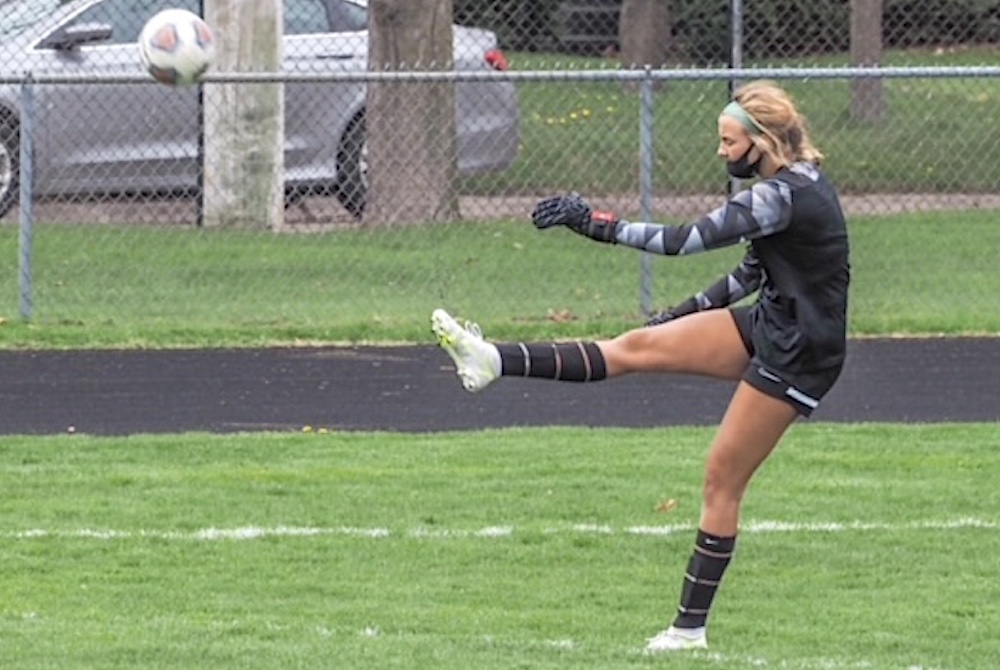 Syann Fairfield says she won’t let anything stop her from leading her team to the Division 4 girls soccer championship.

But don’t take her word for it. Look at her actions.

The last time North Muskegon’s girls soccer team was making a tournament run, Fairfield suffered a nasty eye injury early in the second half of a 2019 Regional championship game win over Houghton Lake.

“I went down to grab the ball and took a knee to my eye,” Fairfield recalled with, of all things, a laugh. “I had to come out for a concussion test and to make sure I could see, but then I went right back in. I was not going to let us lose in the Regional Finals because I had to go out.”

Fairfield is the daughter of Jenny DeJohn and Muskegon High School football coach Shane Fairfield, so she grew up as a ball girl and water girl for her dad’s teams and says she learned about toughness and teamwork in the process.

North Muskegon, which is 14-1-1 and ranked No. 1 in Division 4, hopes that the experience of Fairfield and the team’s other seven seniors will be enough to lift the Norse to the school’s first soccer state championship after heartbreaking 1-0 Semifinal losses to Kalamazoo Christian in 2018 and 2019.

“We’ve come so close in the past. We’re giving 100 percent every day and hope that makes the difference this time.”

If the popular school of thought holds that a championship soccer team starts in the back with the goalkeeper and defense, then the top-ranked Norse might just be ready to break through.

Fairfield, who first-year head coach Caleb Parnin calls “one of the greatest athletes that North Muskegon has ever had,” is a dominant, 6-foot-1 keeper and the final line of defense for a team that has allowed just four goals all season. 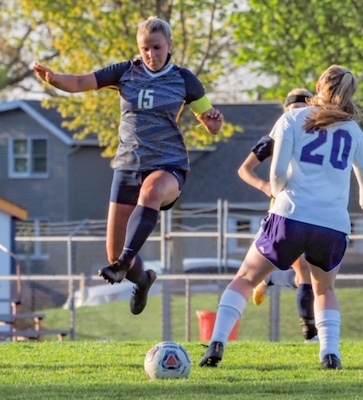 Fairfield benefits from a pair of standout defenders in Schotts and junior Grace Vander Woude, but the real secret of this North Muskegon team is the combination of great senior leadership and up-and-coming and talented underclassmen at every position.

Fairfield, an all-state middle hitter who will play volleyball next year at Ferris State, injured her ankle late in the basketball season and missed the first several weeks of this soccer season. But she used that time to mentor freshman keeper Emma Lamiman.

The same is true at midfield, where the dominant Wilson missed time earlier this month with an ankle injury, forcing promising freshmen Spencer Zizak and Allie Jensen to be thrown into the heat of the battle.

The leaders up front are the lethal 1-2 combination of Johnson, the leading scorer with 25 goals and 16 assists, and Olsen, whose powerful right leg has produced 19 goals and 18 assists. Among the youngsters learning from those two everyday are sophomores Natalie Pannucci (11 goals, 6 assists) and Jaley Schultz and freshman Kennedi Koekkoek – who scored the most memorable goal of the season with two seconds remaining to salvage a 2-2 tie against No. 2-ranked Lansing Christian.

“When I was out, Spencer and Allie stepped up and now they’re both playing with so much confidence,” said Wilson, who was still taking it easy at Tuesday’s practice. “So, sometimes injuries help the team in the long run, but I will definitely be back and ready to go.”

The Norse suffered their only loss of the season against visiting Division 1 school Holland West Ottawa, 1-0, on April 24, a game in which Johnson did not play.

The tie against Lansing Christian came on May 17, when the Norse found themselves trailing 2-0 at halftime. Johnson cut the lead in half with a goal on a penalty kick, before the harried final moments, when Schotts put a shot on goal and Koekkoek converted the rebound just before time expired.

North Muskegon played its last game May 21, a tight 2-1 win at Ludington. With no conference tournament in the West Michigan Conference, the Norse will have an 11-day layoff before their District opener June 1.

“Honestly, we’re excited to have this extra practice time, because our coaching staff really thinks we can bring these girls to the next level,” said Parnin, who is assisted by Chris Wilson, Pete Johnson, Adam Schultz and Kim Gorbach – the program’s junior varsity and goalkeeper coach. 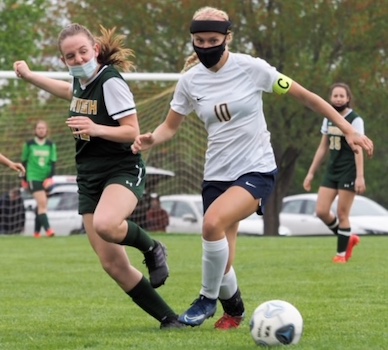 Parnin, a 2003 North Muskegon graduate who played collegiate soccer at Trinity International University near Chicago, returned home in the fall of 2019 to teach English at his alma mater. The plan was to serve a one-year apprenticeship as Ryan Berends’ assistant, before COVID-19 wiped out last spring’s season.

Parnin, who compared coaching this year’s talented team with “being handed the keys to a Corvette,” has made a point of getting more girls out for soccer. His work is paying dividends with 34 high school girls soccer players, nearly double the number from 2019, with the ability to field a junior varsity team.

While the future looks bright for the program, right now everyone’s focus is on this year’s tournament – where another potential showdown with No. 3-ranked Kalamazoo Christian looms, as well as a possible rematch against Lansing Christian in the Final on June 19 at Michigan State University.

If those clashes come to fruition, Parnin is well aware they could be decided by a shootout, in which case he feels very confident with Fairfield in the net.

“I couldn’t trust anyone more than I trust Syann,” said Parnin. “When we do our penalty kick drills, Syann wins. I mean, she shuts it down.

“She has the size and athletic ability, but she also has that intangible quality of a great athlete where she welcomes the challenge.”

PHOTOS: (Top) North Muskegon senior keeper Syann Fairfield boots the ball during a game against Holland West Ottawa. The Norse have allowed just four goals in 16 games this spring. (Middle) North Muskegon senior captain Emily Olsen, who has 19 goals and 18 assists, leaps before making a play on the ball. (Below) Norse senior captain Audrey Wilson, who has 16 goals and 10 assists, battles for possession of the ball. (Photos by Rhonda Kinahan.)