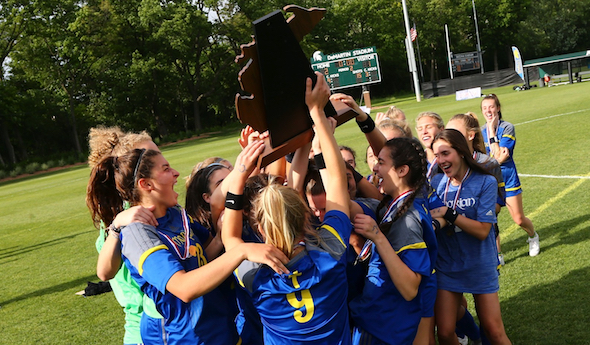 EAST LANSING – For all the success the Bloomfield Hills Marian soccer team has enjoyed over the last two decades, the 2019 Division 2 Final offered the Mustangs a chance to achieve two things for the first time.

Second, Michigan State University’s DeMartin Stadium provided a new venue for Marian to win its eighth title since 2003. Marian had won its titles in Richland, Grand Rapids, Troy and Williamston, but never had appeared in a Final held at MSU.

“The last time we won two in a row, we got knocked out on the first night (of the playoffs),” Marian head coach Barry Brodsky said. “We did let them know that there has only been two Marian players since I’ve been here that have won three state championships, and they weren’t in a row. Now, we have seven or eight who have just joined those two.”

The game-winner came with 4:18 remaining in the second period of overtime, off Marian’s 12th corner kick of the game.

“My coaches told me to stay at the far post, and so I stayed on the far post,” Askounis said. “That’s where the ball went, and I just tapped it in. I scored last game, but not like this in the state championship. It feels amazing.”

The Mustangs were frustrated at not being able to convert any of their previous 11 corner kicks in the contest, but ultimately it was a corner kick that was good to Marian again.

Brodsky said game-winning goals in the Catholic League final and in a 1-0 District win over Detroit Country Day also came on corner kicks.

“It’s not a secret,” Brodsky said. “You play great defense and you do great on restarts, you’re going to win a lot of games.” 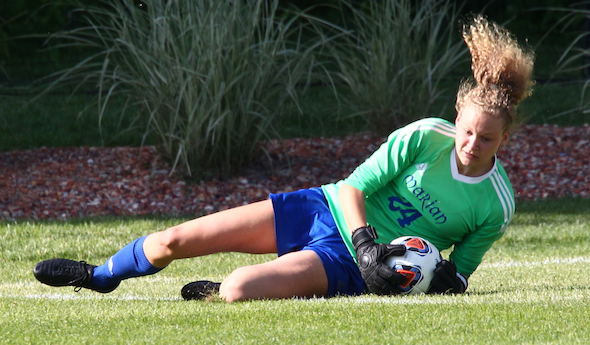 Marian also won despite having to play the late stages of the game without all-state Dream Team forward Jansen Eichenlaub, who will play next at University of Virginia.

Eichenlaub suffered a hamstring injury with 18 minutes left in regulation and didn’t return.

It was more heartache for Forest Hills Northern, which has frustration that stretches beyond losing to Marian three straight years in the Final.

The Huskies lost for the fourth straight time in the championship game and fifth time since 2010.

Forest Hills Northern lost in the 2016 title game to Pontiac Notre Dame Prep and in the 2010 Final to Marian as well.

If there is a silver lining for the Huskies, it’s that they will graduate just two seniors.

“If we didn’t come out and play good, I would be more upset about it,” Forest Hills Northern head coach Daniel Siminski said. “It was a pretty even game I thought, which was a far cry (from) two years ago. We are getting there.”

Forest Hills Northern took a 1-0 lead with 34:21 left in the first half on a goal by sophomore Grace Sayers, who took a beautiful lead pass along the ground from junior Alyssa Greshak in the box and buried the chance inside the far post.

Marian tied the game 1-1 with 35:57 left on a goal by sophomore Emily Rassel, who pounced on a loose ball in the box and placed a shot underneath the crossbar.

Eichenlaub flicked a pass into the box to Rassel after senior Katie Sullivan placed a cross toward Eichenlaub.

Marian carried the play in overtime and had a glorious chance with six minutes left in the first extra period when two Mustangs players broke in all alone on Forest Hills Northern goalie Parker Hutchinson, who made an initial save.

But the ball ricocheted to another Marian player, who shot the ball wide with nothing but the goal in front of her.

Ultimately though, Marian got the winning goal it needed, and added more history to its already storied program.