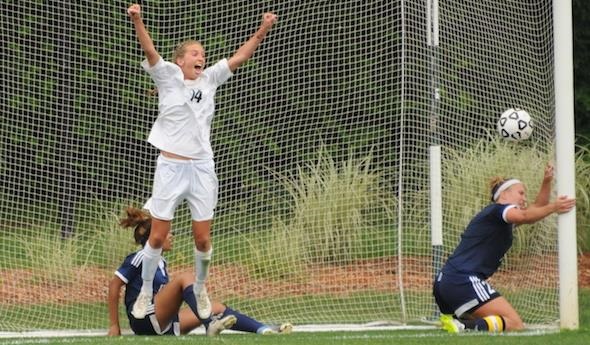 Maddy VanDyke already was known to be one of the state’s top soccer players – after graduating from Hudsonville Unity Christian, she went on to start most of four seasons for Michigan State.

But she also showed at the end of her last MHSAA Final to be quite a sprinter.

VanDyke picked up an incredibly-placed pass from Bethany Balcer and raced half the field and past two Detroit Country Day defenders to send home the overtime game-winner in the Division 3 Final on June 12, 2015, to give Unity a 2-1 win.

Country Day had scored the game’s first goal 18 minutes in and led until Unity evened things up with 17 minutes to play in regulation.

With just more than four minutes left in overtime, VanDyke picked up Balcer’s long pass just past midfield. She pushed her winning shot past a deflection by Country Day keeper Isabel Nino, who made the record book with 13 saves that game after also making 13 when the teams met in the 2014 Final, also a Unity win. Nino went on to play at University of Michigan.

Click for coverage from Second Half and see below for the game winner from the NFHS Network.