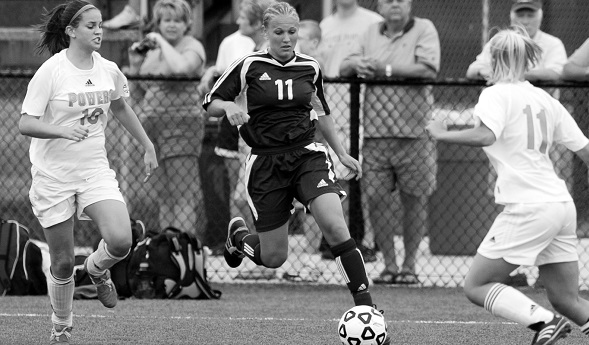 We kick off our girls soccer week of #MHSAA Moments with one of the brightest stars in MHSAA history.

Laura Heyboer graduated from Hudsonville Unity Christian in 2008 with 167 goals, and she remains tied for sixth-most over a career all-time. Certainly, the last she netted to finish her junior season was among the most memorable.

With the 2007 Division 3 Final against Flint Powers Catholic tied 2-2, Unity’s Mindy Capisciolto took possession of a short Powers goalie kick and moments later sent in a cross that Heyboer collected in front of two defenders. Heyboer then sent home the game winner 7:25 into extra time to give the Crusaders a 3-2 win, their third-straight Division 3 title and 82nd straight win.

Heyboer scored all three of her team's goals in the Final. She'd also score the overtime game-winner in the 2008 Final against Williamston.

Unity’s title streak would reach six seasons, though 2010. Its winning streak would stretch to 86 games the following season, as the team won its first four games of 2008 before tying the fifth. The Crusaders also still hold the unbeaten games streak of 98, building to 97-0-1 before suffering a defeat that spring.

Heyboer would go on to set the career scoring record at Michigan State and play professionally and for the U.S. U-23 national team. She currently coaches at Waynesburg University in Pennsylvania. Capisciolto played at Calvin College.

Read more about the 2007 championship game from the Grand Rapids Press and watch the winner below from the MHSAA Network.