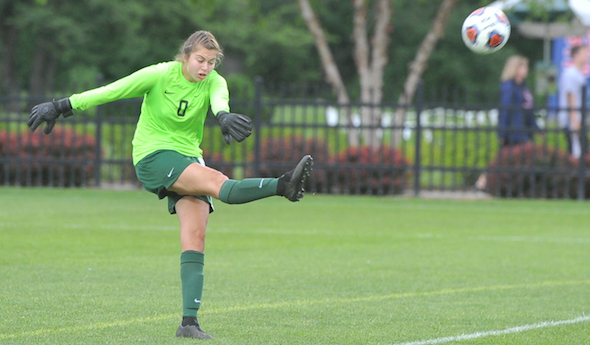 But Novi sure made it look that way in Saturday’s Division 1 title game at DeMartin Stadium. The Wildcats had four players score at least once – including senior Jessie Bandyk, who netted two – and cruised past Plymouth, 5-0, to take home their second straight Finals championship.

The five goals were the most that have been scored in a Division 1 championship game.

“These seniors, knowing that this was their last game, they were given a gift,” Novi head coach Todd Pheiffer said. “When you start the state tournament, you never know when your last practice is going to be. You show up for the game the next day, you hope you win and get to practice the next day. When you get to the state championship game, you know when it’s your last practice.”

There will be no more practices this season for the Wildcats – nor games. There’s nothing left to prove. Novi wrapped up an unbeaten season, finishing 28-0-1, becoming just the second team in state history – along with Hudsonville Unity Christian in 2006 – to win 28 games and finish unbeaten.

Despite Saturday’s dominating offensive showing, Pheiffer spent a lot of time after the game praising his defense.

“I cannot tell you how proud I am of my back four,” said the coach, speaking about senior Lauren Calhoun, juniors Nevada Larson and Sarah Katinas and sophomore Eva Burns. “My back four defenders, my goalkeepers, they just pride themselves every single game about limiting the other team’s shots and giving up no goals.”

The Wildcats allowed just eight goals this season and picked up 23 shutouts – the second most in state history. On Saturday, they allowed just five shots, two on goal. They outshot Plymouth 25-5.

Junior Avery Fenchel scored the first goal of the game for Novi, off a pass from Katinas, just before the midway point in the first half. Katinas slid a pass through a pair of Plymouth defenders, finding Fenchel, who made a stop-move to her right before shooting back left near post to beat the goalkeeper for a 1-0 lead.

The game stayed that way until the final three minutes of the half. That’s when Novi senior Lexi Whalen took a long pass from Fenchel and dribbled to her left to set up a 20-yard strike to make it 2-0.

The Wildcats would add three more goals in the second half to pull away for the win – their third over Plymouth this season. Senior Julia Stadtherr poked in a pass from junior Michelle Jecmen to make it 3-0 with just under 28 minutes left in the game. Bandyk then did her magic over the game’s final 26 minutes. 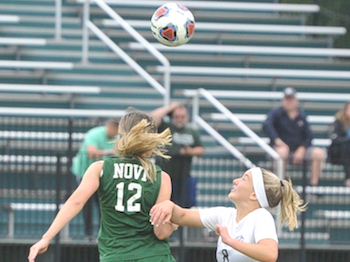 “We came into this game like it was the first time we had played (Plymouth), and we gave it everything we had,” said Bandyk, who scored both of her goals off passes from Stadtherr. “Speaking as a senior, this was our last 80 minutes playing high school soccer. We all gave it our all, and we just connected and put the ball in the back of the net.”

Freshman Sammy Maday made two saves in goal for Novi. Sophomore Abbey Pheiffer, the team’s regular starter who was injured prior to the start of the tournament, finished up the game in goal to share in the shutout.

Plymouth’s struggles started early, as during the first half it was outshot 15-1 and did not put a shot on goal.

“We played them a lot tougher the last two times. But they’re a strong team,” Plymouth head coach Jeff Neschich said. “When we got down, we kind of lost our composure.”

Plymouth had just two shots on goal, those coming off the feet of senior Kennedy White and junior Lily Tiplady during the second half. The Wildcats finished the season 19-5-1. They had a wild postseason run which included a pair of comeback victories.

“We had two playoff games where we came from two goals down to tie them up and eventually win them (Canton and Troy),” Neschich said. “We couldn’t keep pulling the rabbit out of the hat. But the accomplishments they had were incredible. There’s nothing to be ashamed of.”

Novi has now won seven Division 1 titles, all since 2005, and is a perfect 7-0 in its championship game appearances. The Wildcats were ranked No. 1 all season by the Michigan High School Soccer Coaches Association.

“All we kept hearing at the beginning of the year was, ‘They’re the defending champ, everyone wants to knock you off,’” Todd Pheiffer said. “We graduated 10 seniors from last year’s team. We are not the same team as last year. We had a good corps coming back, some great senior leadership back, but we were a different team. This was about these girls winning their state championship. I’m just so proud of how this team’s played all year long.”