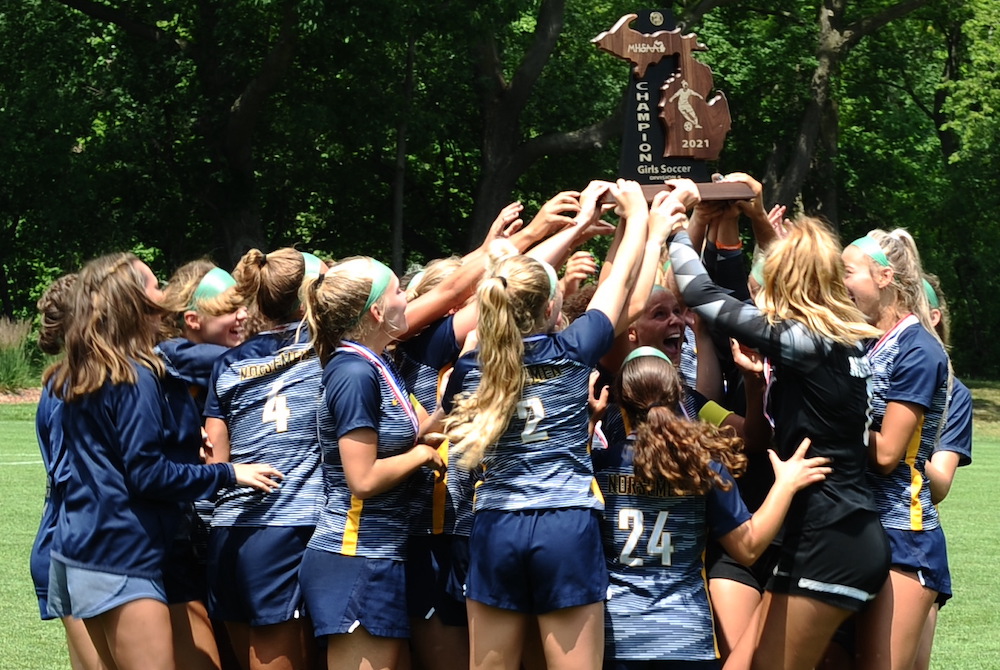 “We’ve been telling the girls all year that we are a second-half team,” said Parnin. “Honestly, part of that is just brainwashing them to believe it, and then hoping they make it a reality.”

It proved to be masterful strategy by the first-year coach, as the Norse worked their second-half magic again Saturday. They turned a 1-0 halftime lead into a 5-0 runaway over Royal Oak Shrine Catholic in the MHSAA Division 4 Final at Michigan State University’s DeMartin Soccer Complex, clinching the first Finals championship in program history.

Hope Johnson, NM’s senior leader and top scorer, set up sophomore Jaley Schulz for the lone goal of the first half in brilliant fashion – then started the second-half onslaught with a breakaway goal seven minutes after the restart.

Johnson, who has played with many of these teammates since she was 4 years old, said they were excited for the chance to play on the state’s biggest stage.

“We were always waiting for the next challenge and for the opportunity to show what we can do,” said Johnson, who added two assists to finish with 37 goals and 23 assists this spring. “Today was that day.”

North Muskegon dominated the game, finishing with a 22-6 edge in total shots and a 12-2 advantage in shots on goal.

That performance was a continuation from the second half of Wednesday’s Semifinal win over top-ranked Grandville Calvin Christian, when the Norse scored two goals after halftime in a 2-0 win. NM allowed only one second-half goal the entire season.

Royal Oak Shrine, which was the reigning Division 4 champion after downing Kalamazoo Christian 4-0 in the 2019 Final, finished 14-4-1 and lost its first game since April.

The Knights played their best soccer in the final 20 minutes of the first half, controlling play for a long stretch after Schulz’s opening goal.

Shrine was ultimately denied by the Norsemen’s stingy defense, led by senior Sophia Schotts and junior Grace VanderWoude. The other defensive leaders for NM were junior Molly Stewart and freshmen Abby Martinez and Kennedi Koekkoek. 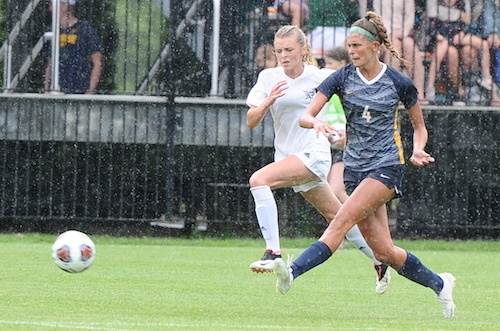 “This season was something special,” said 21st-year Shrine coach Mark Soma, who had just three senior starters. “Things got away from us in the second half, and a lot of that had to do with being young and tired and making mistakes.”

On the rare occasions that the Knights got past the Norse defense and had scoring opportunities, NM senior keeper Syann Fairfield shut the door.

Fairfield, the daughter of Muskegon High School football coach Shane Fairfield, showed her toughness by coming well out of her box and challenging shots repeatedly.

“Syann is so tough, and she was determined to get that shutout,” said Parnin, who is assisted by Chris Wilson, Pete Johnson, Adam Schulz and goalkeeper coach Kim Gorbach. “She senses things and goes out and stops them before they happen. Nothing she does surprises me.”

The early part of the game was played in a steady rain, but by early in the second half the rain had moved out, leaving dry and extremely calm conditions.

It was a perfect stage for Johnson to work her magic, repeatedly drawing Shrine’s defenders to her with her breakaway speed and then dropping the ball off to her teammates. A perfect example came on the opening goal, when Johnson dribbled the ball across the goal mouth, bringing Shrine’s keeper with her, then slid it back to Schulz, who was unmarked, for an easy goal.

“Hope just finagled her way around a couple of defenders, like she does, got the goalie out of position and left it for me,” explained Schulz. “I just tapped it in.”

It was fitting that three of NM’s senior captains scored goals (Johnson, Olsen and Wilson), while the fourth – Schotts – led the defensive effort.

While the season had a storybook finish with the school’s first Finals championship, it was understandably bittersweet.

“This is such a great group of girls, and we all love each other so much,” said Johnson. “I honestly don’t know what I’m going to do not seeing them all the time.”