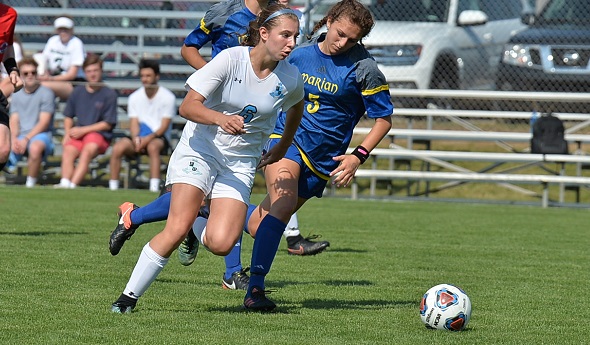 GRAND RAPIDS – The Forest Hills Northern girls soccer team made a surprising run to another MHSAA Finals last season with a roster filled with 18 underclassmen.

A large majority are back, and it’s created similar aspirations for a program that has blossomed into a formidable state contender in Division 2.

“I like this team because they have a lot of experience,” sixth-year Huskies coach Dan Siminski said. “It’s always a new challenge every year, and this year is no different from that standpoint with the departures and you have to fill some holes and move people around.

“One of the things I like about this team is they are very versatile, so we are converting some people from old positions to new ones and trying some things out. So far, it’s looked pretty good and they are quick to pick up concepts.”

The Huskies have appeared in three consecutive Finals, but come up short each time.

In 2016, they lost in a shootout to Pontiac Notre Dame Prep. The past two years, state powerhouse Bloomfield Hills Marian has spoiled their title hopes.

The season-ending losses haven’t defined their seasons, but have instilled an inner determination to keep striving toward the championship.

“We’ve come close, really close one year, but it keeps them hungry for sure,” Siminski said. “Runner-up or not, it’s not taking away from their accomplishments and I feel like everybody has been really happy with what we’ve done even though we didn’t win them all.”

Senior captain and four-year standout Carlye Fatum said the team hasn’t been discouraged by the setbacks. Instead, she and her teammates learned valuable lessons through each experience.

“Each year we’ve gotten so close, and every year we come back just as strong or even stronger and wanting to put in just as much work just to get there again,” Fatum said. “It’s tough getting there so many times and having it right there and being just short, but as a team I think we’ve handled it well and learned from it each year to improve.”

The Huskies have reached the Finals the past two years with different makeups.

In 2017, a senior-heavy squad carried the load, while last season a youthful bunch matured throughout the season en route to another lengthy postseason run.

Last year’s journey included a shootout win over Spring Lake in the Regional Final and an overtime victory against Richland Gull Lake in the Semifinal. 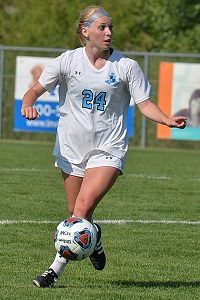 “It’s definitely a talented and close-knit group, and with the success these girls have had they kind of find ways to win even though it hasn’t been easy,” Siminski said. “Success tends to breed success, I guess, but all of them are very coachable and buy into team soccer and team concepts.”

Sammi Blair, another senior captain and four-year performer, is thrilled to have everyone back in the fold in pursuit of another successful campaign.

“I’m super excited about everyone coming back and how well we have started with our team chemistry because of last year,” Blair said. “That will help going into the season, and I think we want to show that we can keep this success up no matter what is thrown at us. We’ve lost players to DA (U.S. Developmental Academy), and we just want to prove that we can be just as good with players that come in and step up right away.”

One key attribute that hasn’t wavered in the Huskies’ incredible three-year span is their belief in themselves.

“One thing passed on from team to team is they are just a bunch of winners,” Siminski said. “They find a way, and you can’t teach that. It’s an intangible, and hard to put your finger on, but every time there has been a close game we just feel like it’s going to be all right, and it has been.

“We all trust each other, and we all go into it knowing we have each other’s back,” she said. “We know if we make a mistake that it’s OK, and we are strong enough to come back from it.”

All of the girls play club soccer outside of the high school season. It’s allowed them to keep their individual skills sharp.

“We are blessed to have good clubs here, and they train from a young age,” Siminski said. “It keeps them constantly developing.”

Siminski said complacency hasn’t been a factor. His team knows to compete at the state level they have to endure the rigors of getting there.

“I haven’t seen a dip in their want to win conference and Districts or anything else,” he said. “A lot of that comes from senior leadership and captains pushing the kids and keeping them focused. I’m very excited and proud of the kids for what they’ve done so far, but we have more to come.”