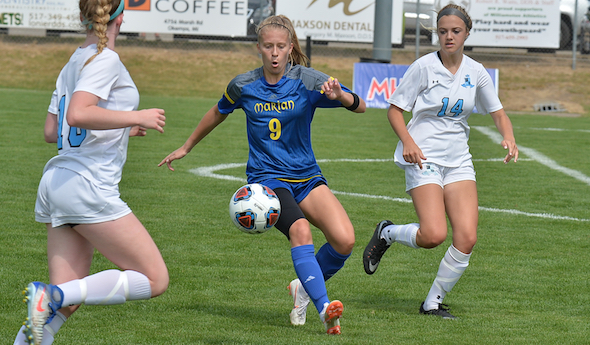 While it’s convenient when previewing a Finals series to find a common theme bonding all four games, sometimes that’s just not possible.

Sometimes, like this weekend, the stories are unrelated – but all worth the price of admission.

In Division 1, reigning champion Novi is attempting to repeat without one of its top players against a Plymouth team seeking its first title. The Division 2 Final will match up Bloomfield Hills Marian and Grand Rapids Forest Hills Northern for the third straight season.

Essexville Garber in Division 3 and Royal Oak Shrine Catholic in Division 4 are playing in Finals for the first time. Kalamazoo Christian is back after finishing Division 4 runner-up the last two seasons, and Garber’s Division 3 opponent Grand Rapids South Christian is one of three teams among the final eight that didn’t win its league but can end this spring with a victory.

Tickets cost $8 and include admission to the softball and baseball games also being played at MSU’s Old College Field. Radio broadcasts of all games can be heard online at MHSAAnetwork.com. All games will be streamed live online at MHSAA.tv and viewable on subscription basis. (Click for brackets, scores and a parking map.)

All statistics below are through Regionals.

PLYMOUTH
Record/rank: 19-4-1, No. 5
League finish: Second in KLAA East
Coach: Jeff Neschich, 15th season (record N/A)
Championship history: Division 1 runner-up 2010.
Players to watch: Kennedy White, sr. F; Rebecca Przybylo, sr. GK. (Stats not submitted.)
Outlook: Plymouth won its first Regional title since 2010 on the way to advancing to a Final for the second time in program history. These Wildcats avenged a regular-season loss to No. 13 Troy in the Semifinal, and will attempt to continue that streak after falling to Novi twice. The only other loss, and the tie, came to No. 11 Hartland. White made the all-state first team last season for the second straight, and Przybylo made the third team as a sophomore.

ESSEXVILLE GARBER
Record/rank: 22-0-2, No. 7
League finish: First in Tri-Valley Conference East
Coach: Troy Stewart, 15th season (164-116-22)
Championship history: Has never played in an MHSAA Final.
Players to watch: Rachel Hahn, sr. F (30 goals, 22 assists); Teagan Betzold, fr. F (29 goals, 16 assists); Natelle Vantol, jr. M (14 goals, 16 assists); Logan Rau, sr. GK (0.42 goals-against average, 16 shutouts).
Outlook: Just three years ago, Garber was finishing its third straight sub-.500 season – but was on the verge of this climb. The Dukes went from eight wins in 2016 to 13 the next season and 15 last spring. In addition to the unbeaten record this season, Garber also won its first Regional title before upsetting No. 2 Warren Regina in the Semifinal. Hahn earned an all-state honorable mention as a junior, and she’s one of seven Dukes who had scored at least nine goals entering this week including also senior Isabel Baranski (14 goals, 11 assists). Rau actually made it 17 shutouts on the season with another Tuesday and has given up only eight goals all spring.

ROYAL OAK SHRINE CATHOLIC
Record/rank: 22-3-3, No. 2
League finish: First in Detroit Catholic League 2/3
Coach: Mark Soma, 15th season (record N/A)
Championship history: Has never played in an MHSAA Final.
Players to watch: Allison LaPoint, jr. GK (17 shutouts); Chloe Woodbeck, sr. F; Elli Plunkey, soph. F; Regan Robinson, jr. M.  (No other stats submitted.)
Outlook: The Knights have dominated in winning their first Regional title and now moving on to their first championship game. Shrine has outscored its six tournament opponents by a combined score of 34-1, with wins over No. 14 Lansing Christian, No. 4 Monroe St. Mary Catholic Central and No. 5 Madison Heights Bishop Foley along the way. LaPoint and Robinson made the all-state second team last season, and Plunkey earned honorable mention. But the team got a massive boost when Woodbeck – who has signed with Purdue – joined the high school team this spring after playing at the elite club level.