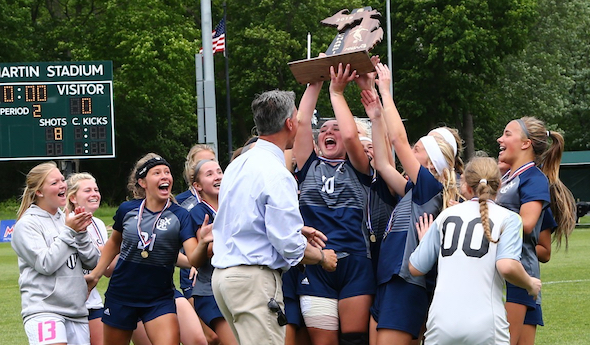 EAST LANSING – Grand Rapids South Christian senior goalkeeper Annika Zuverink said that throughout this spring, head coach Brian Broekhuizen brought the team bagels every time she and the Sailors shut out an opponent.

But toward the end of the season, Zuverink said Broekhuizen started bringing something else to reward a scoreless performance.

Whatever the choice of food, it was bagels and cheeseburgers for all on South Christian’s squad again Saturday following the Division 3 Final at Michigan State University’s DeMartin Field.

The Sailors recorded their 20th shutout of the season and had plenty of offense to flank their stout defense, scoring twice in the first half en route to a 3-0 victory over Essexville Garber.

It was the second title in school history for the Sailors, who also won it all in 2013.

“I think that’s really impressive,” Zuverink said. “I can’t believe we successfully did that. It’s unbelievable.”

The victory also served as a milestone win for Broekhuizen, who won his 100th game as head coach of the South Christian program.

“That is so special, especially with this group,” Broekhuizen said. “I don’t know what to say about that. It’s just so fitting for me to celebrate that with these girls.”

South Christian opened the scoring with 23:25 left in the first half on a goal by senior Joz VanTol, who headed home a service into the box by senior Sydney Cleary on a free kick from roughly 30 yards out taken near the right sideline.

The Sailors then scored a back-breaking goal off a corner kick right before halftime. Junior Audrey Batts served the ball into the box, and senior Elise Van Sparrentek chipped the ball through defenders and beyond the goal line to give South Christian a two-goal cushion.

The Sailors didn’t let up to start the second half, tilting the field in their favor and then finally cashing on another opportunity. 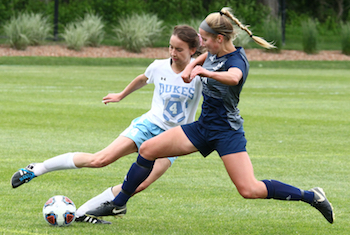 VanTol dribbled into the right side of the box and fed a pass into the middle to junior Emma DeVries, who buried the point-blank chance with 33:18 left in the game to make it 3-0.

That offense was more than enough for South Christian’s brick wall of a defense.

“At the beginning of the season, I tricked them a little bit and said, ‘Defenders, raise your hand,’” Broekhuizen said. “By now, most of them know that everyone should raise their hand. We work on defending from the front to the back. Forwards cut the field in half, midfielders pressuring and covering, and the back covering, tackling and winning headers. It’s a defensive effort, and now they know defense really wins championships.”

South Christian carried the play throughout, outshooting Garber 15-8 and earning all nine of the game’s corner kicks.

Garber head coach Troy Stewart said the physicality of South Christian was something his team hadn’t seen all year.
“We don’t play the teams they do,” Stewart said. “We didn’t know the physicality was going to be like that and we weren’t prepared, and that’s on us as coaches. We probably should’ve come over here and seen a few games. We learned a lesson.”

While it was a disappointing Final for Garber (22-1-2), in time the Dukes will look back favorably on their first championship game in school history.

They finished with nearly three times as many wins as in 2016 – when they won just eight games –claimed their first Regional title, and upset No. 2-ranked Warren Regina in a Semifinal.

But after building the program to this point, Stewart said after 16 seasons he is stepping down as head coach to spend more time with his three granddaughters who are getting into soccer.

Given it was the program’s first appearance in a Final, Stewart said the team didn’t know there would be a runner-up trophy and medals presented to his players afterward. Finding out that news was a pleasant surprise, even in defeat.

“We just didn’t know,” Stewart said. “Every time we were going, it was day-at-a-time and we are going to play whoever is on that field. We didn’t know there was a trophy and medals.”