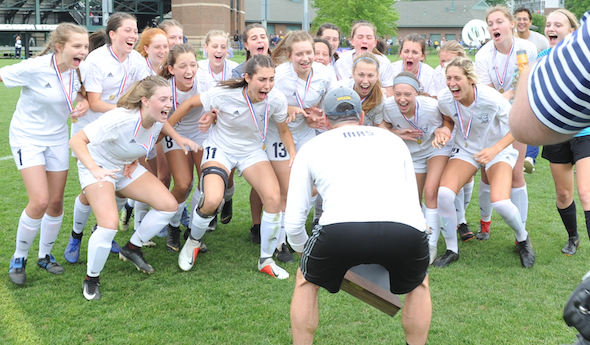 EAST LANSING – Royal Oak Shrine Catholic girls soccer coach Mark Soma knew when he made a promise to Chloe Woodbeck, he’d have to do his best to keep it.

“Chloe and I were texting each other early in the year and I told her ‘If you come play for us, I promise you we will win a state title,’” the coach recalled.

On Saturday afternoon at DeMartin Stadium, the coach made good on his assurance to his Purdue-bound senior. His Knights scored a pair of goals in each half en route to a dominating 4-0 victory over Kalamazoo Christian in the Division 4 championship game, bringing home the school’s first team championship in any sport since 1974.

“He said it and I was like, ‘OK, we’ll see. We’ll see what happens. If we can do it, great. If not, it is what it is,’” Woodbeck said. “So I took the chance and I came out and played, and I’m so happy I did. It’s amazing to be out here with my classmates. It’s something I’ve never been able to do before. I’m so happy I can end my high school career doing this.”

It was Woodbeck, who has attended Shrine but played high-level club soccer with the Michigan Hawks up until this spring, who actually got things going for the Knights. She capitalized on a free kick with 24:11 to play in the first half. Drawing the penalty just moments earlier, Woodbeck sent a shot curling up and over Kalamazoo Christian goalkeeper Jenna Blackwell’s outstretched hands to break the ice for her team.

It proved to be the game-winning goal. But it was just the start for a potent Shrine team which defeated Saginaw Nouvel 6-0 in the Semifinal to earn a berth in its first-ever championship game.

Just under 11 minutes after Woodbeck’s score, junior Lily Hotts took a cross from junior Jess Reaume and redirected it for a 2-0 lead.

As good as the Knights’ offense was, it might have been an even more impressive showing by their defense with the play of junior goalkeeper Allison LaPoint. Trailing by a goal with just under 17 minutes to play in the first half, Kalamazoo Christian junior Lauryn Mohney broke in down the right side. She took a shot from 12 yards out but was thwarted by LaPoint, who made a diving save to her left. LaPoint did the same with 27:30 left in the second half and the Knights leading 2-0. Again it was Mohney on another breakaway. And again, it was LaPoint who made a diving save to preserve the two-goal cushion for her team.

“I rely a lot on my defense because they’re amazing and I trust them. But it is important to be able to make those key saves in tough situations like that,” said LaPoint, who finished the game with four saves.

Shrine (23-3-3) fed off of the defensive energy, scoring to make it 3-0 just five minutes later. Comets head coach Jay Allen felt that was a critical play for his team. 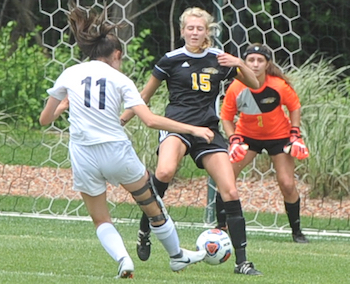 “If Mohney scores that one in the second half, it’s 2-1. That changes the whole complexion of the game,” Allen said. “(LaPoint) makes that save, they come back and it’s 3-0; now we’re in a bigger hole. That keeper is just outstanding. When you have that kind of game, just like hockey, a keeper that can keep you in (the game), that’s half the battle.”

It was freshman Bridgette Drouillard who gave Shrine the three-goal lead, taking a crossing pass from Hotts and punching it home.

Shrine capped off the scoring with 10:24 remaining as junior Regan Robinson took a pass from Drouillard and drilled a shot from 30 yards out.

Despite falling in the Division 4 Final for the third straight season, Allen was proud of his team for achieving what so few get a chance to do.

“We worked hard, from Day 1. When they came in for preseason conditioning, our goal was to be playing here today,” the coach said. “We knew what we needed to do, but (Woodbeck) snuck that one in early on us and we just couldn’t recover from that. My seniors left it all out on the field today. We were just that one pass away, that one shot.”

Woodbeck has won high-level club championships over the years, but said Saturday’s title was sweet in its own way.

“The difference about playing for your school is the crowd, the amount of people that are here,”  Woodbeck said. “I’ve played in a national championship (game) in San Diego, and there are just parents. It was great, but just having my entire community here and like people I don’t even know who are coming to me, cheering me on. The stands were packed, and I’ve never seen that in club.”

Woodbeck is one of just three seniors on the Shrine roster, along with Katie Norton and Mia Ciarlone. With all the talent returning next year, she’s confident her teammates can do it all over again in 2020.

“I think after this year, the confidence level is so high,” she said. “Even when we were standing in line receiving our medals, everyone was like, ‘Wow, we just did that.’ I think they can do it again. We’ve got like 11 juniors, and they’re all really strong and can carry our midfield. So I think they’re going to be just fine.”