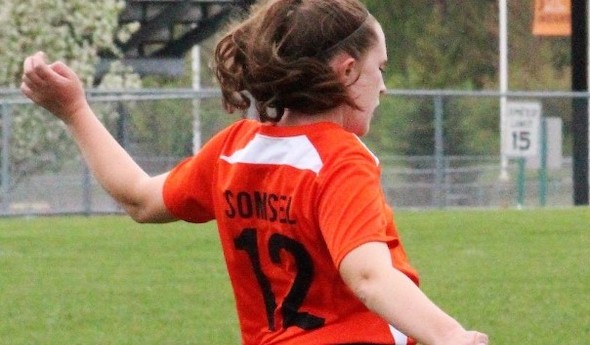 TECUMSEH – Erin Somsel will be giving her Valedictorian speech to fellow Tecumseh High School graduates next month. Her message will be to not take anything for granted.

“I think that’s a pretty important thing, especially because of what we are all going through right now,” said Somsel. “You just never know.”

Somsel wasn’t one to take anything for granted in the classroom or on the Tecumseh soccer field.

She entered her senior year No. 3 academically in her class but juggled four advanced placement classes to finish first among her classmates with a 4.222 grade point average.

“I made the goal of being Valedictorian my freshman year,” she said. “I didn’t know if it was possible. I was No. 3 in my class my sophomore and junior years and the start of my senior year. I think the extra advanced placement classes helped put me over the top. It was tough, but worth it.”

Somsel, 18, wants to become a neurologist. She will study biology and biochemistry on a pre-med track at Kalamazoo College. Oh, yeah – she plans on playing soccer too.

“I knew I wanted to play at the next level for a while now,” she said. “Soccer has been a year-round sport for me. It’s been my only sport since middle school.”

Somsel picked up the game before going to school. By the age of 7 she was playing club soccer on traveling teams.

“I played on the local club team in Tecumseh for two years and then moved to the Jackson Rush,” she said. “It was through club soccer that we had a camp in which there was some college coaches. The Kalamazoo coach came to the camp year after year. I’ve known him since my freshman year.”

She missed out on her senior season of soccer because of the global pandemic but committed to Kalamazoo recently. She played center back for Tecumseh and the Rush and intends to continue playing defense in college.

“I’ve always just liked defense,” she said. “I was never one of those players that wanted to be up front and to score goals. I gravitated toward defense from the start. At center-mid, I like the fact that you can see the entire field and sort of direct people. That’s where I like to play.”

Somsel has been a captain for both the Rush and her Tecumseh squad. She was named to the all-county and all-District teams in 2018 and 2019 and was honorable mention in the Southeastern Conference. She picked up two “Defender of the Year” honors from Tecumseh.

Over three varsity seasons, she started all 56 games in which she played. She scored seven goals and had 10 assists over her three seasons, taking just 40 shots on goal during her career.

When she wasn’t hitting the books or on the soccer field, Somsel volunteered with the Lenawee County Humane Society and was an active member of the National Honor Society and SADD (Students Against Destructive Decisions).

Somsel isn’t worried about trying to mix soccer into her college regimen. By now, she’s used to it.

“Soccer really helped me tremendously with my academics,” said the daughter of Jim and Holly Somsel. “It helped me develop a really good work ethic. I had to have a really good study schedule to keep up with everything, and I had to stick to that schedule. Soccer helped me stay on track.”

“I felt it would be a really good idea, especially since I am going into pre-med,” she said. “I thought it would better prepare me for playing sports and studying in college.”

She did a lot of homework during the car rides from her home in Tecumseh to Jackson, the home of her club team.

“My parents and everyone was super supportive,” she said. “My Tecumseh coaches (Thomas Goodman and Matt Twiss) and my Rush coach (Marco Bernardini) really helped me along the way.”